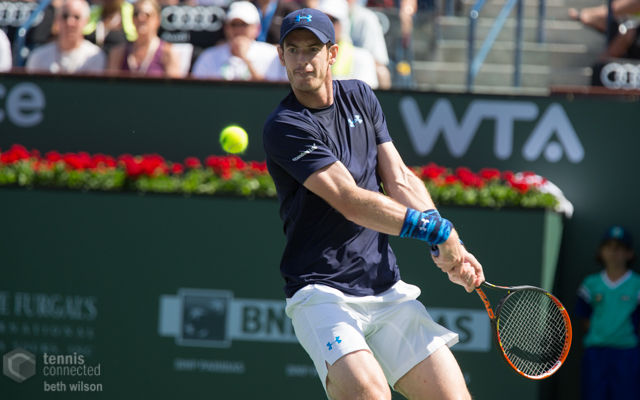 Then, there were two.

After so many matches and a whole lot of rain, the final for the 2015 Rogers Cup is set. To the surprise of absolutely no one—okay maybe not, but the seeds didn’t lie this week—Novak Djokovic and Andy Murray, the two favourites at the start of the event, will battle for the right to hoist the Rogers Cup trophy.

After his win the previous day against John Isner, Chardy was asked if he would rather play Djokovic or Ernests Gulbis in the first Masters 1000 semifinal of his career. By way of answer, Chardy said that, “Well I’ve yet to win a set against Novak (Djokovic)…”

He trailed off, but his silence spoke loudly. The Frenchman nearly got his wish, after Nole needed three sets and to save two match points against Ernests Gulbis, but sure enough there stood the world’s best player across the net from him as the first semifinal got underway. At the post-match conference this time, after losing 6-4 and 6-4, Chardy spoke of playing against the No. 1-ranked player. “Every time if you win or lose,” he said, “you learn a lot about your game.”

This match was no different: Djokovic wasted little time in asserting his might and broke Chardy in the match’s first game. “I don’t know what happened, but when the match started I became extremely nervous and I made two double-faults,” Chardy told reporters. “But… it’s part of tennis. This is how you build your experience.”

And despite the fact that the Frenchman’s record against Djokovic now stands at 0 sets won and 24 sets lost in 10 match-ups, Chardy’s week in Montreal attests that he’s become a better player. “The more you play tournaments and the more you get used to it, you get used to the intensity,” Chardy said, “to the length of the matches.”

The 28-year-old closed the interview by praising Djokovic on a facet of his game that tends to be overlooked. “There’s not one single moment where I was able to read his serve,” he said. “He doesn’t serve that fast, but he changes the speed and he’s extremely precise.”

Speaking to reporters, Djokovic jokingly complained that the 42-year-old Daniel Nestor managed to maintain his immaculate record in doubles after he and Édouard Roger-Vasselin beat the Djoker and Janko Tipsarevic in three sets in the doubles semifinal. “He continues to annoy me,” Djokovic said, speaking of Nestor. “He’s an example of somebody that has so much passion for the sport (and who) can be a real role model for many young tennis players coming on the Tour.”

The Serb had teamed with Tipsarevic this week in Montreal and was thrilled for his great friend that they made the semifinals—even though he only had an hour or so, after his singles match, to prepare for the doubles match. Djokovic said that, “I enjoyed winning also with him on the court, because I know that’s going to help his confidence.”

Fans of Tipsarevic hope that it will, as the Serb has endured a difficult past two seasons. The 31-year-old was a Top 10 player in the world for two seasons, achieving a high of No. 8 in April of 2012. He’s since plummeted all the way to No. 443 following a number of injuries that has kept him off the courts for 17 months.

Djokovic also looked ahead to the final, saying that he needed to play his best match of the week. He’ll need to against an Andy Murray who was at the top of his powers in dismantling a spent and tired Kei Nishikori by the score of 6-3 and 6-1 in only 66 minutes.

With the win, Murray becomes the new No. 2 on the ATP World Tour rankings regardless of what happens in the final. But surely he’d rather punctuate the ranking with a win.