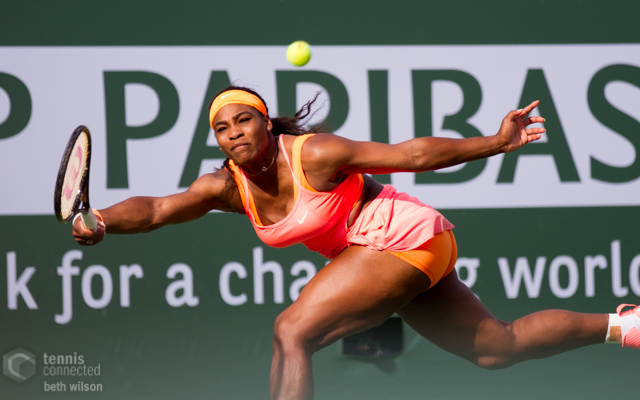 Welcome to Tennis Elbow, the column that looks back on the week that was in the world of tennis. This week, Charles Blouin-Gascon reviews the 2015 season up to this point on the WTA Tour.

So tell me, are you still enjoying this down time in the tennis calendar?

Make sure you do make the most of it and see your family and loved ones, because before you know it tennis will be right back and you seemingly won’t have a minute to yourself.

This week, I complete what I started last week and look at the five players who have most dominated the three Grand Slams on the WTA Tour this season. Your first guess is to say that it’s been a wide-open season beyond the obvious one name but, as you’ll see, four other legitimate favourites have emerged.

Welcome to yet another season in women’s tennis dominated by the very best player in the World. As odd as it may sound, Serena Williams is still getting better and is utterly alone at the top, with still only one non-walkover loss in 2015. She has just completed the second “Serena Slam” of her career at age 33 and will complete the calendar-year Slam next month if she can only win the US Open, in her native country for, oh I don’t know, the fourth year in a row.

You say that one day, her reign at the top will stop, but don’t act so sure: the tour is currently so devoid of talent that perhaps only retirement will stop her.

Because wherever Serena goes, so must Maria Sharapova. At this point, it’s pretty apparent that the American exists mostly as the kryptonite of the Russian, or perhaps we should see things the opposite way: that by now, Sharapova exists as but the final stepping-stone in Serena Williams’s quest for excellence and greatness.

But continue to try is what Sharapova will keep doing, because she has no other choice. At this rate, she may never beat Williams again, but she is still a clear No. 2 on the WTA Tour. Things could be worse.

If the future of women’s tennis has a face, it very well could be Garbine Muguruza’s. The Spaniard followed up her claim to fame of having beaten Williams at Roland Garros in 2014 with an appearance in the Wimbledon final at the beginning of July.

Serena Williams praised her young opponent after beating her at Wimbledon, saying that she would win a few Grand Slams before long; most agree. The 21-year-old has all the tools and all the shots, and all signs point to her also having the mental fortitude and self-belief necessary to dominate for a long time.

Or maybe it will be Madison Keys who dominates the sport once Serena Williams has retired? The 20-year-old has surprised at Grand Slams this year, with her three best results of her career at the first three majors of the season; she entered the Top 20 for the first time in February just after her semifinal in Melbourne.

Coached by Lindsey Davenport, Keys is tall and takes control of rallies behind her powerful serve and forehands: it’s not a coincidence that her third-round result on clay at the French Open this year is much worse than what she managed on the hard courts of Australia and the grass of Wimbledon (i.e. a quarterfinal loss). It bodes well for the US Open, played on hard courts, for the native of Illinois.

Maybe we shouldn’t expect so much from Timea Bacsinszky, the Swiss who prefers the slower surface of Roland Garros to others; for that reason, it isn’t a surprise that she performed better in France, making the semifinal, than she did in Australia (i.e. she reached the third round) and at Wimbledon (i.e. she made the quarterfinals).

And yet, everything should be seen as a surprise. The veteran of 10 seasons, and once upon a time among the youngsters upon whom tennis invested so much, was this close of quitting tennis for good. That was in 2013: she was 23 years old and her home felt like a “prison”, she said.

In 2015, Bacsinszky is playing tennis because she wants to. And maybe that’s why she is winning her matches.