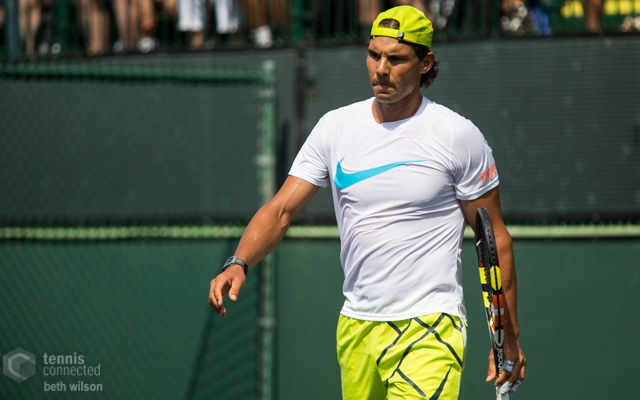 Welcome to Tennis Elbow, the column that looks back on the week that was in the world of tennis. This week, Charles Blouin-Gascon reviews the 2015 season up to this point.

There is scarcely any down time during the tennis season, but perhaps this qualifies as one.

The Australian Open, and Miami and Indian Wells Masters 1000 back-to-back seem to have happened in a different season altogether; and no sooner had Novak Djokovic’s dream had gone up in flames at Roland Garros that he had redeemed himself on the holy grounds of Wimbledon. Time waits for no one in tennis.

But this month? With apologies to the organizing committee of all tournaments on the calendar this month, July mostly serves to better anticipate the slate in August.

Such is the tennis season that you almost never have the time to reflect and ponder the meaning of what has just unfolded. But sometimes, you need to take the time. You need to understand how you have arrived where you are to better see where you are headed. For the next two columns, including this one, I will highlight the five men and women players who have marked the Grand Slam tennis season until this point.

Novak Djokovic is certainly the man, but don’t believe me only because I said so on Canadian television. (#Humblebrag, I know. I know.) The Serb has been the best player on the ATP World Tour for the better part of five seasons, reaching at least the finals of 15 of the previous 19 Grand Slam tournaments. He is 47-3 this year, including 17-2 against members of the Top 10 and 7-1 against those in the Top 5. If not for the next man on the list, the Djoker would also be going for the calendar-year Grand Slam at the US Open in August.

As Rafael Nadal has succumbed to injuries, and Roger Federer has faded to age, it’s Djokovic who has emerged to push the boundaries of what we thought was possible in tennis.

But of course, Stanislas Wawrinka had to ruin history for all of us. Wawrinka lived up to both of his monikers in Paris, being very much the man and an animal possessed as he spoiled Djokovic’s bid to add a first Roland Garros title to his resume. The win gave Wawrinka his revenge on Djokovic, who had cut short his title defense in Australia in January because winning the Australian Open is just what the Djoker does.

Maybe you feel for Andy Murray? The theoretical fourth wheel of the big four when the big four was a thing, Murray has entered the somewhat latter phase of his career but still does not appear to be capable of meeting the expectations that the tennis world has for him. We all would love so much for him to become tennis’s next great champion, and there’s a version of this universe where he would be just that if not for Djokovic, Federer and Nadal, but alas Murray is so incredibly Andy Murray. He’s got all the shots, but he’s playing in the golden age of the sport. He’s both underrated and overrated. He’s Andy Murray.

Has Roger Federer become a sort of rich man’s David Ferrer? For years, Ferrer was the little engine that could, the one player who could never seriously threaten the four great champions ranked ahead of him, but also the one player who barely ever lost to anyone not from the Top 4. Now, Ferrer is 33 years old and our expectations for him have appropriately been lowered.

In 2015, Federer is entrenched as the second best player on the ATP World Tour and yet, he has one Grand Slam title since 2010. He’s still good for the occasional final here and there, but the one formerly known as King Roger seems overmatched in the bigger matches now; he’s also, quite possibly, just the second best player from Switzerland.

But he’s 33 years old and soon turning 34. Maybe it’s time to start expecting a little less from the man.

5) The lack of Rafael Nadal

Rafael Nadal’s best results this season have been two quarterfinals. At Wimbledon, the Spaniard lost in the second round, but an early Nadal loss in England has become so inconsequential. What was most telling is Nadal’s loss at the French Open: at the tournament that he has dominated so outrageously for the past decade, Nadal was overmatched and outclassed. What should have been such a landmark achievement didn’t feel as such, because Djokovic was too good for the Spaniard, even at Roland Garros.

We hope that Nadal fans have the stomach to endure what could very well be the new normal for their guy.