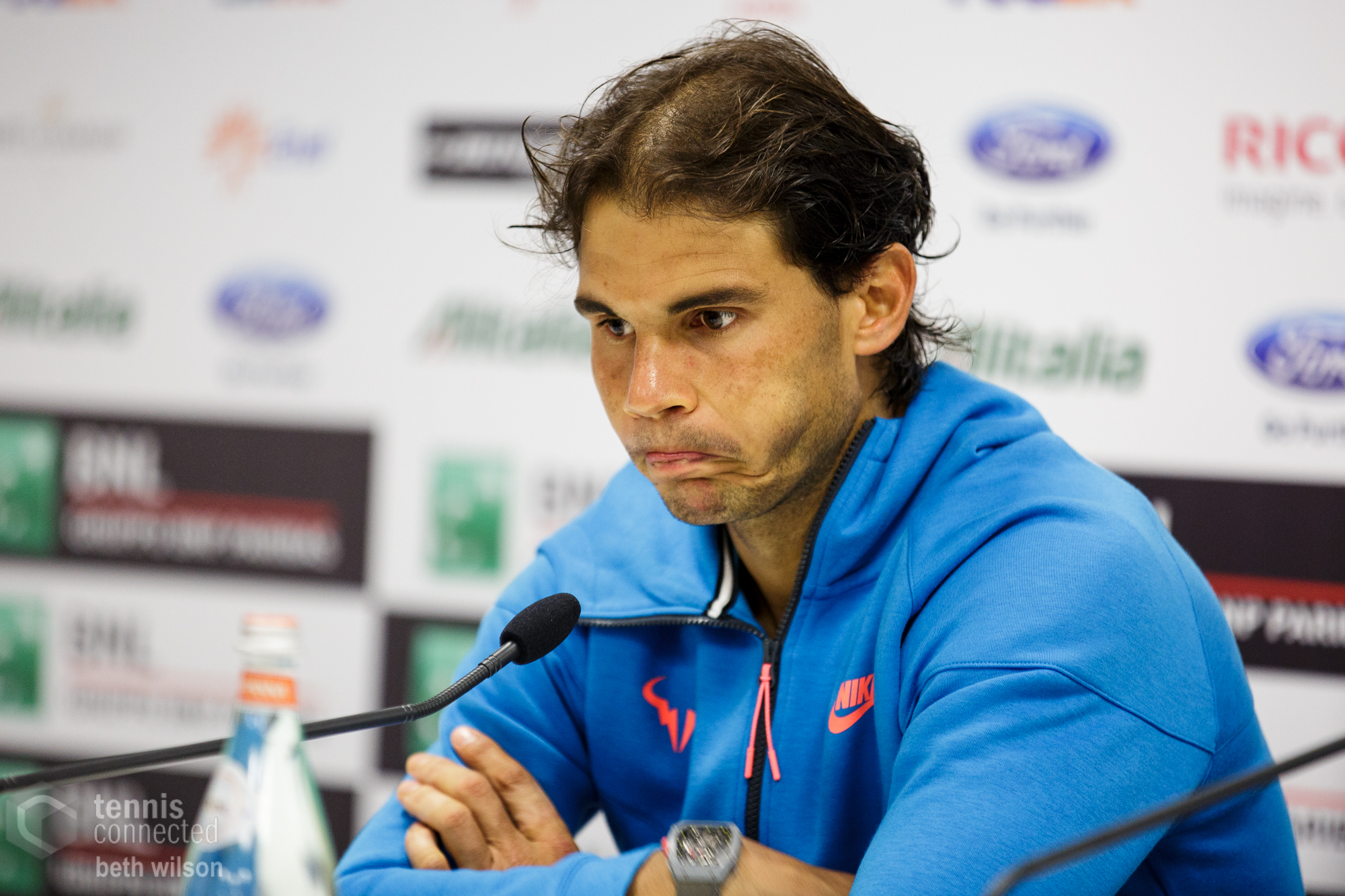 Stan Wawrinka and Jo-Wilfried Tsonga will fight one another for a place in Sunday’s men’s final after scoring surprise wins over Roger Federer and Kei Nishikori respectively on Day 10. Meanwhile, today sees the tournament’s most anticipated showdown finally take place, with tennis titans Novak Djokovic and Rafael Nadal going head-to-head on Court Philippe Chatrier. Read on for my views on that match and today’s other quarter-finals.

In windy conditions in Paris, eighth seed Wawrinka produced a sublime performance to upset his higher ranked countryman Federer in straight sets. Wawrinka simply bludgeoned his way to victory, cracking 43 winners against just 28 errors, with Federer unable to match Wawrinka in the power stakes and unable to make any inroads on the Wawrinka serve. Amazingly, it was Federer’s first Grand Slam match since 2002 in which he was unable to obtain at least one break of serve.

Tsonga raced out of the blocks against fifth seed Nishikori, dropping just one game in the first set as he dominated with his forehand. Tsonga moved ahead in the second set before a break in play late in the second set gave the Japanese star a chance to gather himself and, whilst he couldn’t close the gap in the second set, Nishikori went on to claim the third and fourth sets to send the match to a decider. With the Parisian crowd urging him on, Tsonga scored an early break in the fifth set and maintained his advantage to claim a famous victory.

In the women’s tournament, Ana Ivanovic is back in the semi-finals of a Grand Slam for the first time since winning the title in Paris in 2008, the Serb proving too strong for young Ukrainian Elina Svitolina. With football star boyfriend Bastian Schweinsteiger watching on, Ivanovic handled the windy conditions far better than her opponent to collect a 6-3 6-2 victory.

Ivanovic will face Lucie Safarova for a place in the final after the Czech thirteenth seed continued her good form in Paris, collecting a high-quality first set in a tiebreaker over Spanish seed Garbine Muguruza before going on to claim a 7-6(3) 6-3 win against the twenty-first seed and secure a place in her first French Open semi-final.

Sara Errani is a former finalist here in Paris and the Italian is at her best on clay, where she can use her elite court coverage and anticipation skills to maximum effect. Unfortunately for the seventeenth seed, she comes up against a player today whom she’s been unable to beat in 8 previous matches, top seed Serena Williams.

Williams has started slowly in her last few matches, so watch for the American to explode out of the blocks today. This pair played each other in the 2013 semi-finals in Paris, with Williams jumping all over Errani’s serve and losing just one game for the match. I think Errani will put up a better effort today (she pushed Williams all the way in a Federation Cup match on clay earlier this year) but I still think it will be a straight sets win for the world number one. Williams in 2.

It’s a match fitting for a final, but Nadal’s sub-standard season to date resulted in him being seeded sixth for this tournament, allowing for this match-up to take place in the quarter-finals. The Spaniard has a mind-blowing 70-1 win-loss record at Roland Garros and has defeated Djokovic no less than 6 times in Paris. Whilst Nadal is a menace on any clay-court, it’s important to note that the particular conditions at Roland Garros suit his game especially well.

Djokovic is currently riding a 26 match winning streak and goes into this match knowing that this represents his best chance to date to defeat Nadal at the French Open. The biggest challenge for Djokovic will be remaining in the moment and ensuring that he doesn’t get ahead of himself or get fixated on the enormity of the situation. In Monte Carlo earlier this year, Djokovic attacked the Nadal backhand and pounced on anything short from the Spaniard. The Serb needs to adopt a similar approach today and ensure he doesn’t get pushed back behind the baseline by Nadal.

I expect Nadal to play much better today than he did in Monte Carlo, and the best of 5 sets format gives him plenty of time to get into the match. Nadal has to be brave today and attack up the line with both his forehand and backhand. If Nadal is too timid with his shots, Djokovic will dictate the rallies and the match. I think Rafa will give it his all, but Djokovic is in better form at present and has the requisite confidence. Djokovic in 5.

It’s fair to say that this is the quarter-final that nobody predicted in the lead-up to the tournament. Swiss twenty-third seed Bacsinszky has had a terrific tournament to date, having beaten a number of high-quality opponents to make it through to the quarter-finals, including American young gun Madison Keys and two-time Wimbledon champion Petra Kvitova.

Van Utyvanck, on the other hand, has benefitted from a number of upsets in her section of the draw, but of course the Belgian was only able to beat the players put in front of her, and has done very well in that regard. Ranked 88 coming into the tournament, Van Utyvanck’s ranking will rise considerably courtesy of her efforts in Paris, but I think Bacsinszky will be too good today. Bacsinszky in 2.

Andy Murray’s glorious clay-court season has continued in Paris, with the Scot’s winning streak on the red dirt now up to 14 matches. Murray leads Ferrer 9-6 in head-to-head meetings, but has never beaten the former French Open finalist on clay. That said, their last clash on the surface was back in 2012 and it is fair to say that Murray has developed significantly as a clay-courter since then.

Ferrer is a difficult opponent on any surface, but the Spaniard is especially tricky to play on clay, given his extreme fitness and willingness to chase down every ball. This match will be tight, but I think Murray’s form on clay this season will give him plenty of self-belief going into this match and I think he is the more creative player of the pair. Murray in 4.