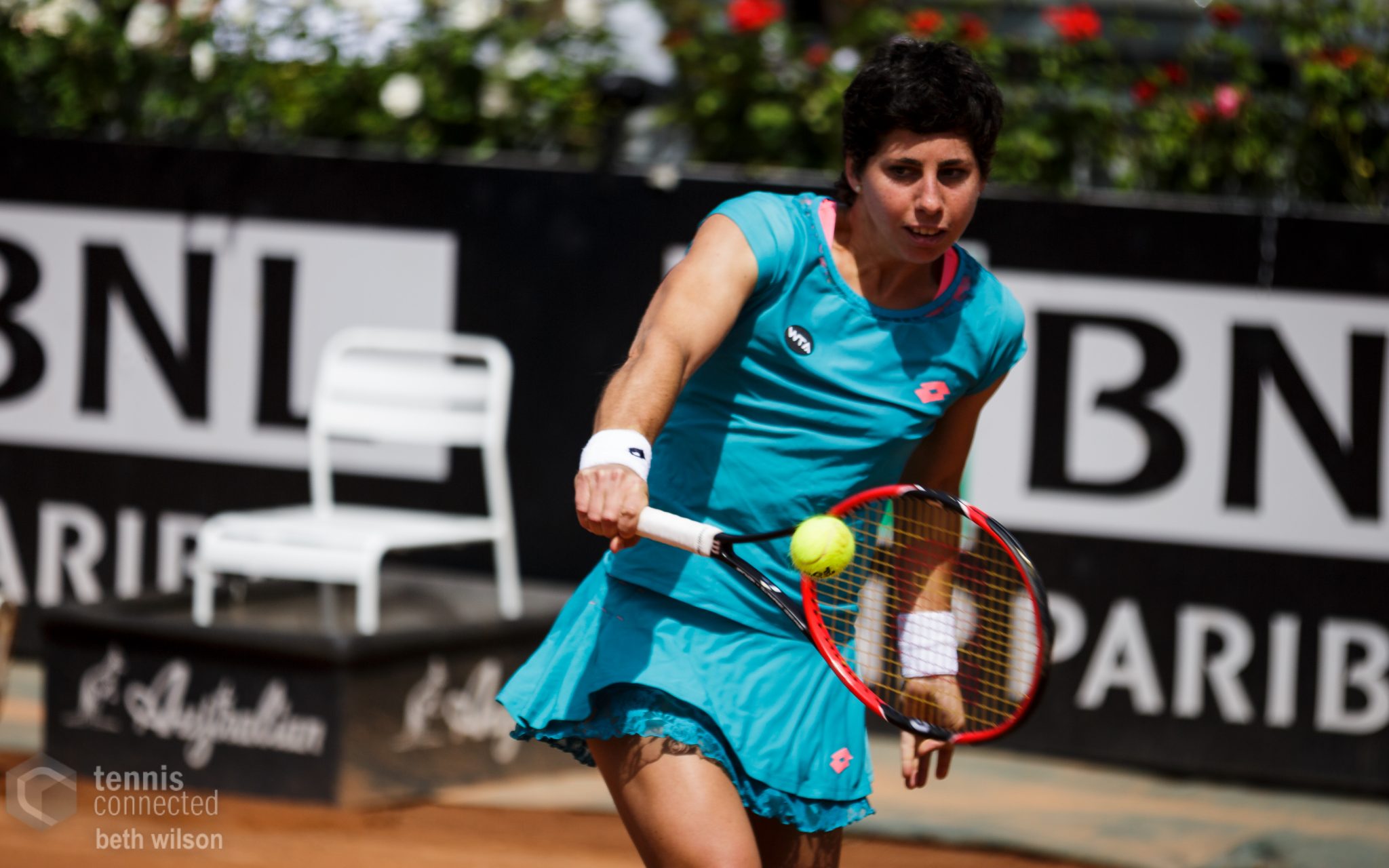 Welcome to Tennis Elbow, the column that looks back on the week that was in the world of tennis. This week, Charles Blouin-Gascon recaps quite the season for an overlooked player.

Her WTA Tour webpage says that Carla Suarez Navarro stands five-foot-four and, for having interviewed her twice, she can’t possibly be much taller.

Yet, she is ranked at No. 8 this morning after losing in the 2015 BNL Internazionali d’Italia final against Maria Sharapova by the score of 4-6, 7-5 and 6-1. That ranking is already quite the progression from the No. 18 echelon she reached at end of the 2014 season and for that, she can thank her performances in 2015.

Indeed, the small one is having quite the large season on the WTA Tour. Suarez Navarro has remained busy in 2015, already competing in 11 tournaments, and she’s certainly made the most of it: after her loss in the Rome final, she now has qualified for the quarterfinals or better at 10 of the 11 events, amassing over $1,273,672 in the process. If the 26-year-old keeps winning at this pace, a spot in Singapore for the year-end WTA Finals seems all but assured.

She’s currently 12-7 against seeded players in 2015, another reason why her season has been amazing. What is amazing, too, is that as far as I can tell there isn’t much fanfare about the kind of tennis the Spaniard is playing. (Maybe there is in Spain, but I can’t speak Spanish and I wouldn’t know.)

Maybe it’s because despite all the excellence, Suarez Navarro isn’t winning the tournaments. She has progressed so far in the draw of so many tournaments, but still hasn’t won in 2015. Maybe that’s why, but that would overlook the fact that she has lost finals against Andrea Petkovic, Maria Sharapova and Serena Williams, who aren’t exactly novice players on the WTA Tour.

Suarez Navarro isn’t winning tournaments and, in that respect, she’s pretty much like the vast majority on players on tour: much is made about the dominance of Rafael Nadal, Roger Federer and Novak Djokovic in the past decade on the ATP World Tour, but only a rare few players actually win tournaments in the WTA too. That’s the nature of tennis anyway—you battle an opponent only for the right, if you win, to repeat it all again the next day and against a new opponent.

In tennis, you’re much more likely not to win the events you do compete in. That doesn’t mean you’re not good enough.

Or maybe it’s not that she isn’t winning tournaments, but the fact that she couldn’t win at the big one. Remember that one tournament where Suarez Navarro couldn’t qualify for the quarterfinals? It happened at the Australian Open early in January, where the Spaniard lost in the first round against a player named Carina Witthoeft; Suarez Navarro’s worst event in 2015 also happens to have been the year’s biggest, and maybe that’s been what has doomed her.

Whatever the reason, I hope this modest column can help shine a light on Suarez Navarro’s excellence. She’s small in stature, but plays an exciting brand of tennis with topspin-heavy groundstrokes, and many attacking shots and volleys. She is equally as compelling off the courts in interviews, when she used her broken English to delight reporters (…on her way to the quarterfinals!) in last summer’s Rogers Cup in Montreal.

Another big tournament starts at the end of this month, with the tennis world descending on the City of Paris. This year at the French Open, Suarez Navarro has quarterfinals points to defend from a year ago; she should be fine.