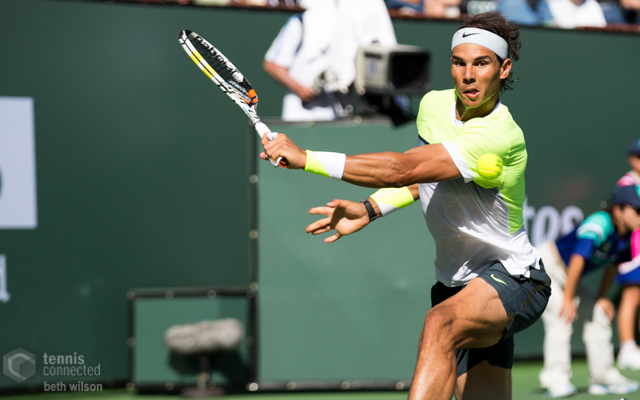 Welcome to Tennis Elbow, the column that looks back on the week that was in the world of tennis. This week, Charles Blouin-Gascon recaps the first week of the 2015 Miami Open, presented by Itau.

We make predictions mostly to be wrong, sure, but sometimes we’d rather be right.

Rafael Nadal lost in his second match at the Miami Open, presented by Itau, against Fernando Verdasco by the score of 6-4, 2-6, 6-3. This is Verdasco’s second win over Nadal in a row, a feat that wouldn’t exactly be noteworthy if Verdasco hadn’t lost in the prior 13 times of this match-up.

So there it is, Rafael Nadal has lost it and will never be the same… unless, of course, if maybe this doesn’t mean much. That other loss against Verdasco only happened in 2012 in Madrid, so it’s not exactly right to say that Nadal has lost it based on two losses that occurred three years apart.

Neither is it right for the other three losses Nadal has suffered in 2015, against Milos Raonic (i.e. in Indian Wells), Fabio Fognini (i.e. in Rio de Janeiro) and Tomas Berdych (i.e. in Melbourne). Singularly, these losses aren’t significant or really meaningful—they’re only so when lumped together. Here are three men against whom the Spaniard had been riding a 27-0 combined streak.

What is significant, however, is that Nadal was relatively harmless against his countryman this past week in Miami. He had all the chances in the world, also known as 12, to break Verdasco’s serve, but only converted three times. The best players don’t win most, or all, of the points—they win most of the key points, and Nadal certainly didn’t do this in Miami. And he hasn’t really done it so far this season.

Part of the reason why has to do with the fact that he again and again chose to retreat against Verdasco. His backhand lacked any kind of bite and power and Nadal chose to hit rallies from behind the baseline. This strategy works on clay and the Spaniard will be ecstatic to see the ATP World Tour calendar now turn to the clay season.

Most of all, that’s why it’s important not to overreact to Nadal’s curious losses since the beginning of the year—he’ll always have clay, right? He will turn 29 in June and does not have many seasons left before he retires, which is another way of saying that Nadal can’t keep doing this forever. He knows it and we know it.

But he also knows that he doesn’t have to keep doing it forever, it’s only for two months at a time between April and May. Should he manage this, stay intent on focusing strictly on the clay court season, then he could add the points, the prize money and, perhaps, the Roland Garros titles to one day soon challenge Roger Federer. (Who knows? It’s only four more years, right?) And that’s when his “King of Clay” moniker would find all its meaning.

I’ll let Nadal leave out of his own accord however. He’s earned this distinction ten times over. For now, let’s just say that he had visions of excellence and grandeur for Indian Wells and Miami, as Chris Fowler noted on Twitter, but he couldn’t live up to his own expectations.

From now on, 250 points from two Masters 1000 events might be all that Nadal can manage away from the clay. But I certainly hope to be wrong with this prediction.