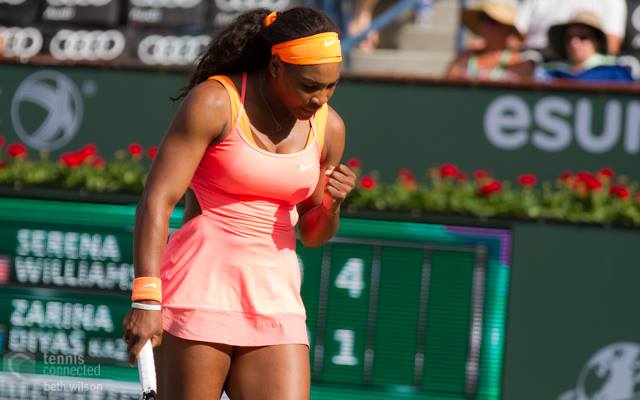 Welcome to Tennis Elbow, the column that looks back on the week that was in the world of tennis. This week, Charles Blouin-Gascon recaps an emotional first week for the great champion.

Serena Williams had called it one of the “darkest moments” of her career, but maybe now that changes.

The 19-time Grand Slam champion won her first match at Indian Wells, 7-5 and 7-5 against Monica Niculescu, in her first visit since 2001, but it didn’t matter as much as simply the fact that she was back. Just two hours away from the Compton neighborhood where she grew up, Indian Wells is where Williams was met with hate and racism when she stepped on the court for a final against Kim Clijsters after beating her older sister when Venus withdrew with tendinitis.

She competes for the 2015 BNP Paribas Open title this week, and that’s progress. It’s progress and it’s not me saying so, it’s herself—that first match she played in 14 years in Indian Wells was one of her “biggest … and proudest moments.”

Surely, tennis fans know the scene by now and what happened for that first match but just in case some readers haven’t had the chance to watch it happen live, here it is.

Biggest and proudest moment, yes, and maybe also most touching. Because when Williams walked on the court, she was greeted with cheers and a standing ovation—a stark contrast with the way that the crowd reacted during that fateful final of 2001.

It’s an event that has stayed with her over the years, as evidenced by the fact that she both boycotted the BNP Paribas Open all those years and that she has written extensively about the experience and the decision to go back.

What was, or wasn’t, said or done to Williams and her family on that day in 2001 remains controversial, but what isn’t is the fact that Venus and Serena changed the world of tennis. Long before becoming part of the tennis firmament, and long before her sister Venus was lauded for her graciousness and her determination in the face of a difficult illness, Serena Williams was an outcast and an outsider.

The two sisters changed the sport of tennis, introducing dominant serves and powerful groundstrokes in a sport where finesse often dominated. That change occurred whether fans and the tennis powers that be were ready for it or not—and by and large, as this 2001 incident shows us, they were not.

But time fixes all, they say, and it appears so. This year at Indian Wells, we are forced to confront an ugly episode and our ugly side because that’s what Williams chose to do it when she decided to compete for the 2015 BNP Paribas Open title.

It’s not exact to say that a sport like tennis should remain strictly about the sport. Not when the ATP World Tour and the WTA Tour are well entrenched in countries such as Qatar. Not when the ATP Qatar tournament is the Exxonmobil Open. Not when Williams and Niculescu take a photo with a Sergeant Hollie West ([Note: if anyone knows the right name and spelling, please write it in the comments. I am going off of what I hear in that video]), who had just made the coin toss before that first match. And not when players represent their countries at the Fed Cup and the Davis Cup. In our world, sports and politics usually mix.

So do sports and sociology and social rights.

Right after the lede, I wrote that it didn’t really matter that Williams won that first match back but maybe that’s not totally right. Maybe it does matter—because tennis, at least professional tennis, exists only in so that a match has a victor and a loser.

Most times, Serena Williams emerges as the victor and that’s all there is to it.