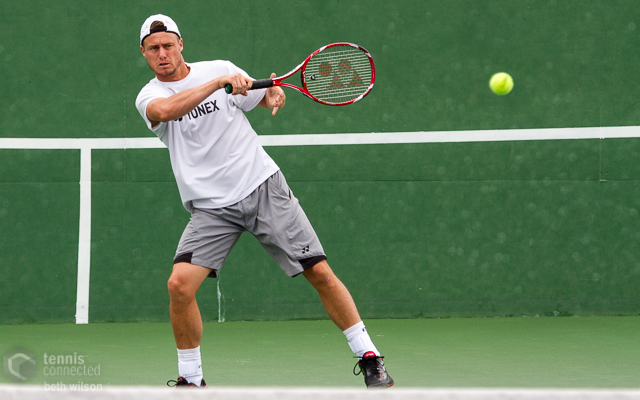 Amongst the various results of last weekend’s Davis Cup action, which saw world number one Novak Djokovic lead Serbia into the quarter-finals and Andy Murray assist Great Britain in upsetting the United States, was the upset of the competition’s top seeds, the Czech Republic, by Australia.

Davis Cup champions in 2012 and 2013, the Czech Republic were admittedly missing their two biggest names, with former Wimbledon finalist Tomas Berdych choosing to sit out of the tie and wily veteran Radek Stepanek, a hero of the team’s wins in the 2012 and 2013 finals, absent due to injury. That said, Australia had to make do without their highest-ranked player at the time, youngster Nick Kyrgios, who was out injured, and also had to combat the patriotic crowd in Ostrava.

Whilst former world number one Lleyton Hewitt has been the heart and soul of Australia’s Davis Cup team for the best part of two decades, this time around it was the rising stars of Australian tennis who spearheaded Australia’s victory. Bernard Tomic, the highly rated 22 year old who has had mixed fortunes on the ATP Tour after a stellar junior career, won both of his singles matches in Ostrava, and seems to have fully embraced the Davis Cup competition after exhibiting a lukewarm attitude towards representing his country as a teenager.

Inspired by the feats of Hewitt, Australia’s winningest Davis Cup competitor of all time, Tomic now holds a mightily impressive 14-2 record in Davis Cup singles play, and his form in Ostrava could prove a major boost as he seeks to work his way back inside the world’s top 30. Australian captain Wally Masur, one of the most astute tennis observers going around at present, was rewarded for his surprise first day selection of Thanasi Kokkinakis, with the teenager upsetting big-serving Lukas Rosol to add another scalp to his growing collection. Kyrgios, a quarter-finalist at Wimbledon last year and at the Australian Open earlier this year, is the better known of Australia’s duo of talented teenagers but Kokkinakis, who beat Julien Benneteau in Brisbane and Ernests Gulbis in Melbourne earlier this year, is tipped by many commentators as having the better long-term potential.

Australia now faces Kazakhstan in July for a place in the Davis Cup semi-finals and, whilst the Kazakhs are no pushover, the tie represents a golden opportunity for Australia to reach the final four of the Davis Cup for the first time since 2006. The tie, which will be played on grass in Darwin, will almost certainly see Kyrgios rejoin the team alongside Kokkinakis, Tomic, Hewitt and Sam Groth (holder of the world’s fastest ever recorded serve).

After several years in the doldrums, Australian tennis is looking brighter than it has since the late 1990s, when Pat Rafter, Mark Philippoussis, an emerging Hewitt and doubles specialists Todd Woodbridge and Mark Woodforde provided the backbone of a team which made the Davis Cup final in three straight years from 1999-2001, winning the competition 1999 and again in 2003. Australia are 28-time champions in the competition (ranking second only to the United States) and might just pull off a major surprise by winning the title this year. In any event, the future of Australian tennis once again looks extremely rosy and there is no doubt that Australia will be a key contender in the Davis Cup for several years to come.

That’s it for this month. Enjoy the upcoming Masters Series events in Indian Wells and Miami and I’ll be back with another serve next month. In the meantime, you can follow all of the action on Twitter: @satelliteserve.