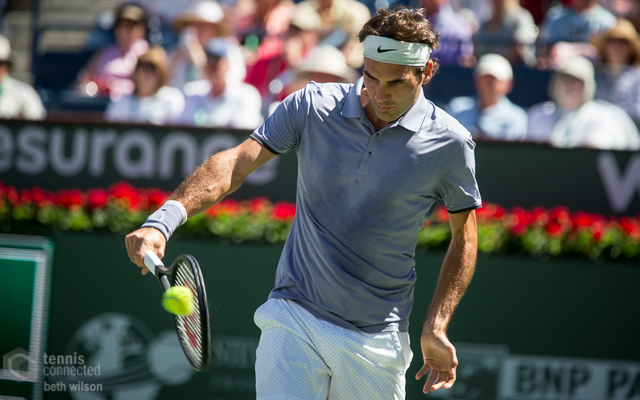 Greetings and welcome to coverage of the Dubai Duty Free Tennis Championships live from the United Arab Emirates. I’ll be providing daily updates of all the action from the Aviation Club here in Dubai, where a host of the world’s best players, including Novak Djokovic, Roger Federer, Andy Murray and Tomas Berdych have gathered for this year’s tournament.

Second seed Roger Federer commenced his quest for a seventh title in Dubai on Monday night, the Swiss superstar recording a straightforward victory over Russian Mikhail Youzhny in windy conditions at the Aviation Club. Having not played a competitive match since a surprise loss to Andreas Seppi at the Australian Open last month, Federer was at his aggressive best against two-time finalist Youzhny, collecting 27 winners (including 8 aces) as he completed a 6-3 6-1 win in 56 minutes. In windy conditions, caused in part by a recent sandstorm that hit Dubai, Federer never let Youzhny into the match, the former top 10 player struggling to make any inroads on the Federer serve and finding it hard to hold his own serve.

Today’s line-up features a number of mouthwatering clashes, with my pick of the bunch being the match-up between fourth seed Tomas Berdych, who has made the final in Dubai the past two years, and big-hitting Frenchman Jeremy Chardy, who is always a threat on fast hard-courts, having beaten the likes of Murray and Del Potro on hard-courts in the past. Top seed Novak Djokovic is also in action, the world number one beginning his campaign against Canada’s Vasek Pospisil. Crowd favourite Andy Murray also features in the schedule of play, the Scot up against the in-form Gilles Muller from Luxembourg.

For those fans looking for a glimpse of rising stars on the ATP Tour, talented young Austrian Dominic Thiem will be in action on Court 3 today against the big-hitting Spaniard Roberto Bautista Agut, whilst young Frenchman Lucas Pouille faces Italian veteran Simone Bollelli. And one of the most entertaining matches of the day should involve wildcard Marcos Baghdatis, a former Australian Open finalist, who is playing against David Goffin, one of the most improved players on the ATP Tour in the last 12 months.

That’s it for today. Enjoy the tennis and I’ll be back tomorrow with another issue. In the meantime, you can follow all of the action on Twitter: @satelliteserve.