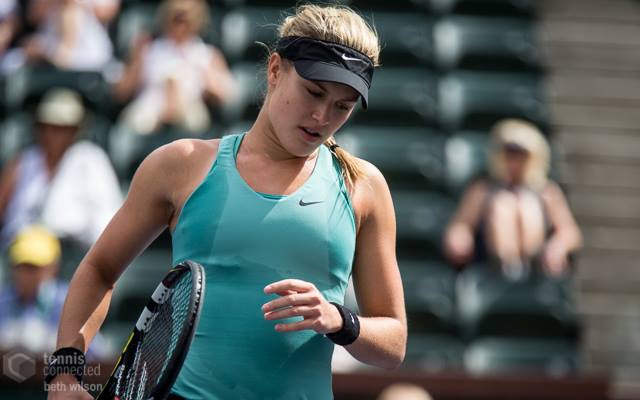 Welcome to Tennis Elbow, the column that looks back on the week that was in the world of tennis. This week, Charles Blouin-Gascon looks at Eugenie Bouchard’s decision to skip the Fed Cup.

The truth is, Eugenie Bouchard may not have even changed anything because it lost so thoroughly.

When Canada had the privilege of hosting Czech Republic earlier this month, captain Sylvain Bruneau had no other choice but to roll out a very, very, very green line-up consisting of No. 150-ranked Sharon Fichman, No. 183-ranked Gabriela Dabrowski, No. 250-ranked (and 17-year-old Françoise Abanda) and No. 791-ranked (and 15-year-old) Charlotte Robillard-Millette.

Bouchard had forced Bruneau’s hand by declining the invitation to help Canada against the Fed Cup defending champion and one of the bigger and better tennis superpowers. Canada, which is “barely getting on the map as a nation” according to the tennis director of Mayfair Tennis Clubs Michael Emmett, and which is in the World Group for the very first time, stood little chance without its very best player.

“It’s a big mistake on her part and she’s going to regret it,” Emmett says. “She wants to be known as a good person.”

Certainly. Though Bouchard had been instrumental in getting Canada to the World Group in the first place, “she hasn’t made (the Fed Cup) a priority.”

It’s the latest in a series of “questionable decisions,” Emmett calls them. From the ongoing beef with the Hong Kong Tennis Association representatives to her recent decision to withdraw from the Dubai Duty Free Tennis Championships, not to mention the coaching saga that was finally resolved this month, Bouchard “is starting to get a bit of a bad rap.”

Indeed, so why skip the Fed Cup? Emmett calls is a selfish decision and contrasts it with Maria Sharapova’s decision to help Russia against Poland and the two Radwanska sisters. If Sharapova can be there, why can’t Bouchard? (That’s a question that keeps coming back during our discussion with Emmett.)

It’s certainly her right, and Emmett understands that. He says that, “I totally get why she’s doing it, but it’s a selfish decision.”

But selfish doesn’t have to be bad. In fact, this decision is probably the best one she can make for Bouchard the tennis player, if not for Canada the country. If she indeed has played too much tennis recently and she indeed does want to win Grand Slams above anything else, then this is the right decision for Eugenie Bouchard. Furthermore, in a twisted logic, a Bouchard win at, say, Wimbledon would galvanize and help Canada emerge and progress even more than a Fed Cup likely could/would. There’s no doubt about that in Emmett’s mind.

But that doesn’t mean that a Fed Cup win wouldn’t help, because it would. Emmett recalls Canada’s run to the semfinals of the 2013 Davis Cup, admittedly a bigger and more recognizable event than its counterpart for women.

“Hockey players represent their players (at the Olympics), why can’t Bouchard?” asks Emmett. One may counter by saying that in this comparison, the Fed Cup is more like the IIHF Ice Hockey World Championships than the Olympics, and that the Sidney Crosbys of the world ideally don’t play in these World Championships because they’re battling for a Stanley Cup.

And yet, the comparison still holds. Should better players play in the Fed Cup every year, then the prestige of the year-long tournament would rise and so would the merit of winning it all for any one country—especially Canada.

In 2013, as Milos Raonic, Vasek Pospisil and co. battled against the big, bad boys of Serbia, Emmett was a guest on CBC News. He believes the same would happen for the Fed Cup. But alas, Canada was decimated 4-0 and will have to beat Romania April 18 and 19 to remain in the World Group in 2016. Bouchard hasn’t said whether she will play in that tie.

Our best bet is probably on Roland Garros and the other majors. Just like Bouchard would want it.