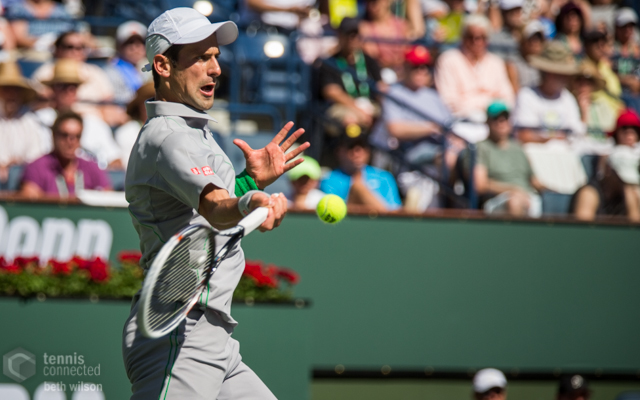 For the fifth time in his career, Novak Djokovic is the Australian Open men’s singles champion, the world number one downing sixth seed Andy Murray in 4 sets on Sunday night to claim the trophy.

In a physically gruelling final full of twists and turns, it was top seed Djokovic who made the early running, the Serb storming out to a 4-1 lead in the first set courtesy of some blistering forehand winners. Murray appeared shellshocked by the level of Djokovic’s play but the Scot worked his way into the match, breaking back twice in the first set to force a tiebreaker. A couple of loose shots from the sixth seed in the breaker was enough to hand Djokovic the set, the world number one ultimately taking the tiebreaker 7 points to 5.

After losing the first set to Berdych in the semi-finals, Murray roared back in the second set, and the Scot started the second set of the final in similar fashion, breaking Djokovic to take a 2-0 lead. A run of 13 consecutive points to Djokovic undid all of Murray’s good work, however, and the two-time major champion was forced to fight his way into another tiebreaker. This time around, Murray was stronger on the big points and levelled the match at a set apiece on his third set point.

Djokovic was looking physically unsettled on court, calling for the trainer to assist with a finger complaint at one stage and frequently stumbling around the court – an unusual sight for one of the most elegant and balanced movers in the sport. An early break to Murray in the third set appeared to give the Scot the momentum, but Djokovic put his physical woes to the side and got increasingly stuck into the Murray second serve, gaining the break back and then breaking again to take the third set, 6-3, in what proved to be the key turning point in the match.

The fourth set quickly became a formality, as an early break to Djokovic put the Serb in sight of the finish line and killed off Murray’s hopes, the Scot physically drained and thoroughly irritated by his inability to cash in on his opportunities and Djokovic’s physical weakness. After 3 hours and 39 minutes, it was Djokovic who was crowned the champion at Melbourne Park once more, the Serb securing a 7-6(5) 6-7(4) 6-3 6-0 victory to claim the eighth Grand Slam of his career and hand Murray a fourth loss in an Australian Open final.

For Murray, it was a disappointing end to a tremendous fortnight and another frustrating second-place finish in Melbourne. However, the Scot has shown the world that he is now back to his best tennis and ready to challenge for majors once more, and so I don’t think he will be too disappointed with the result. Of course, Murray will be annoyed that he didn’t make the most of his chances against Djokovic, but the fortnight in Melbourne has clearly demonstrated that Murray’s partnership with Amelie Mauresmo is bearing fruit. I’m predicting a very successful season for the Scot, who is now back in the top 4 in the world rankings, and I think he will be a major contender at the year’s other Grand Slams.

For Djokovic, it was a satisfying victory for a number of reasons. Grand Slam number 8 moves him into elite territory in tennis history, the Serb now ranking alongside legends such as Agassi, Connors and Lendl and within striking distance of Borg and Laver. The win in Australia also represents Djokovic’s first Grand Slam since becoming a father. Furthermore, with Djokovic struggling with health problems coming into the tournament and again exhibiting physical issues in the final, the victory shows that the world number one is capable of winning majors even when he is not at his very best – a very encouraging sign for Djokovic and a very worrying sign for the rest of the players on the ATP Tour.

That’s it for today. Enjoy the tennis on both tours and I’ll be back later in the season with more tennis coverage. In the meantime, you can follow all of the tennis news and views on Twitter: @satelliteserve.