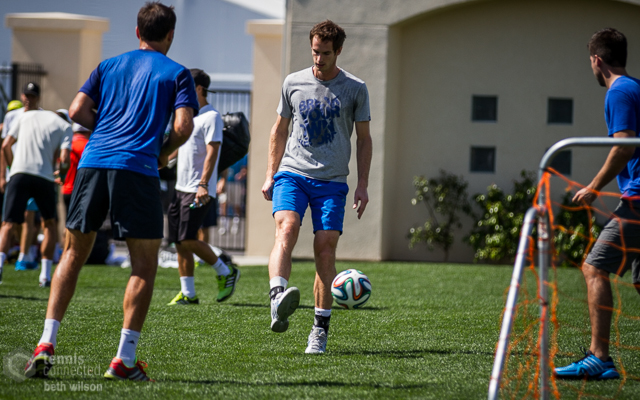 Serena Williams is the Australian Open women’s singles champion for 2015, the world number one claiming a sixth Australian Open crown and the nineteenth major of her career with a straight sets victory over Maria Sharapova.

Tonight, top seed Novak Djokovic takes on sixth seed Andy Murray in the men’s singles final. See below for my thoughts on the men’s championship decider.

Rain disrupted the start of the women’s final on Saturday night in Melbourne, eventually causing event organisers to close the roof on Rod Laver Arena. A double fault to Sharapova handed Williams the break in the opening game of the match. A second break to Williams gave her a commanding lead in the opening set, as the American moved Sharapova around the court with powerful groundstrokes and pounced on any short second serves from the second seed. A sloppy service game from Williams handed Sharapova one of the breaks back, but the Russian was unable to consolidate the break and, after 47 minutes, it was Williams holding a one set lead.

Sharapova tried to get herself back into the match in the second set, some big fist pumps highlighting the Russian’s eagerness to fight back. Sharapova earned herself some decent opportunities on the Williams second serve, but the world number one showed why her serve is considered the best in the game, coming up with aces and service winners at crucial moments to deny Sharapova a way back into the match. The Russian fought off a championship point in the tenth game, eventually pushing the set to a tiebreaker, but once again Williams’ serve proved the difference, an ace sealing a 6-3 7-6(5) victory in 1 hour and 51 minutes.

For Sharapova, it was another fabulous tournament in which she ultimately came up short as a result of Williams’ brilliance. Whilst the Russian will be frustrated that she remains unable to break her duck against Williams, Sharapova’s play in this tournament should give her plenty of confidence for the rest of the 2015 season. For 33 year old Williams, there seems to be no signs of slowing down and, with 19 Grand Slams now to her name, the American is within striking distance of Steffi Graf’s Open era record of 22 majors.

At the start of the tournament, I was firmly of the belief that Novak Djokovic was the favourite for the men’s title and that Andy Murray faced a very difficult path through to the final. Four-time champion Djokovic has made it through to the final but he hasn’t been entirely convincing in doing so, producing a sloppy performance against Stan Wawrinka in the semi-finals. Murray, on the other hand, has been in excellent form in the past week, downing Dimitrov, Kyrgios and Berdych in performances which have made it clear that the Scot is back to the form which saw him claim majors in 2012 and 2013.

Djokovic’s record at Melbourne Park is formidable, the Serb holding a perfect record in Australia Open finals (with 2 of his wins coming against Murray in the final), but Wawrinka showed last year that the top seed is not unbeatable Down Under. Whilst Murray has lost both of the Australian Open finals that he has played against Djokovic (as well as losing another final against Federer), the Scot has beaten Djokovic in their other 2 Grand Slam finals – in New York in 2012 and at Wimbledon in 2013. Those wins will give Murray plenty of confidence heading into this match, and I think the sixth seed is in the sort of form to cause an upset.

Djokovic and Murray have known each other since they were 12, and so know each other’s games very well. Murray’s mindset is very different now that he has gotten the Grand Slam monkey off his back and he no longer suffers from the mental anguish that he suffered from when these players first met in the Australian Open final in 2011. I expect Djokovic to put in a far better performance tonight than he did against Wawrinka, but I don’t think the Serb has demonstrated the precision and sharpness in his game in Melbourne this year that he has exhibited in years gone past. Add that to the fact that Murray looks to be in superb physical shape and I think the Scot will be celebrating Grand Slam title number 3 at the end of this match. Look for the players to split the first 2 sets before Murray gets on top of the Serb and races towards the finish line. Murray in 4.

That’s it for today. Enjoy the tennis and I’ll be back with another serve tomorrow to review the men’s final. In the meantime, you can follow all the action on Twitter: @satelliteserve.