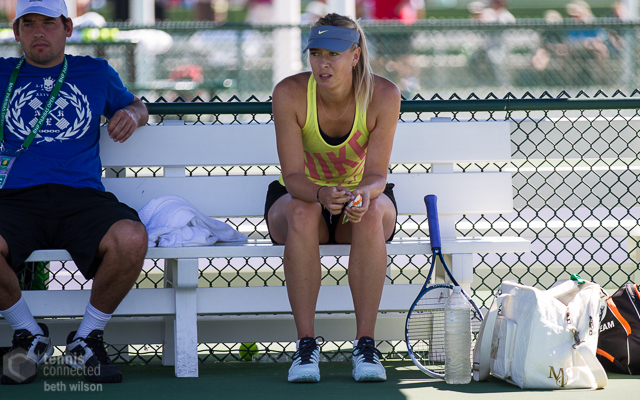 Novak Djokovic will bid for a fifth Australian Open title against Andy Murray on Sunday night, after the world number one took down defending champion Stan Wawrinka in 5 sets on Day 12 in Melbourne.

Tonight, Serena Williams takes on Maria Sharapova in the women’s singles final. Read on for my thoughts on the blockbuster match-up between the top two players in the women’s game.

With Novak Djokovic and Stan Wawrinka having split a pair of epic encounters at Melbourne Park in 2013 and 2014, expectations were high leading into the semi-final between the players on Day 12. Once again, fans were treated to a 5 set encounter, but this match fell short of the previous ones, as both players struggled with their form and fitness at various stages throughout the match.

Wawrinka made the early running in the match, breaking in the seventh game of the opening set. That sparked Djokovic into action, the top seed recovering to force a tiebreaker. It was one-way traffic in the breaker, the 4-time champion conceding just one point as he took the opening set. Wawrinka claimed the second set, 6-3, to level the match at a set apiece, but when Djokovic claimed the third set and raced to an early 2-0 lead in the fourth set it appeared that the match would soon be over.

To the crowd’s delight, the defending champion found a second wind when down in the fourth set, ripping some of his trademark one-handed backhands to first break back and then forge ahead in the set, eventually taking it 6-4. The first couple of games of the deciding set were to prove critical, with Wawrinka squandering break point in the first game and then handing the break to Djokovic with a pair of double faults.

The meek loss of serve early in the fifth set seemed to deflate the Swiss star, with Djokovic firmly focused on the finish line. Wawrinka was unable to win a point on his second serve in the final set, with Djokovic capturing it 6-0 to wrap up a 7-6(1) 3-6 6-4 4-6 6-0 victory in 3 hours and 30 minutes.

For Djokovic, it was a scrappy victory marred by 49 unforced errors, but the Serb will simply be happy to make it through to the final. For Wawrinka, it was a gallant effort at defending his title, but his 42 winners were overshadowed by a whopping 69 unforced errors for the match.

Second seed Maria Sharapova has been in fine form to start 2015, winning the Brisbane International in the lead-up to the Australian Open and then producing sterling straight sets wins over Peng Shuai, Eugenie Bouchard and Ekaterina Makarova in her last 3 matches. The scare against Panova in round 2 seemed to catapult Sharapova into action and she is now playing as well as I’ve seen her play in several years.

The big question for Sharapova is whether she can overcome her abysmal record against world number one Serena Williams. The Russian has beaten Williams just twice in 18 encounters, with the last of those wins coming way back in 2004. That represents a whole lot of mental scar tissue for Sharapova, and it also highlights just how well the Sharapova game suits Williams.

The 18-time Grand Slam champion loves it when her opponents hit the ball with pace, and if Sharapova is going to win today then she will need to find the right balance between playing her own game, which involves aggressive, heavy hitting, and playing the game that frustrates Williams, which requires plenty of variety when it come to speed, spin and direction. Sharapova need look no further than Radwanska’s win over Williams in Perth at the Hopman Cup for an example of how to annoy (and beat) the world number one.

Williams has never lost an Australian Open final, and she is eager to be reunited with the trophy after having an odd run of outs at Melbourne Park in the last few years. If Williams serves well and retains her focus, she’s going to be awfully hard to beat. I think Sharapova, in her current form, has one of her best chances to end her losing streak, but the smart money is on Williams claiming major number 19. Williams in 3.

That’s it for today. Enjoy the tennis and I’ll be back with another serve tomorrow. In the meantime, you can follow all the action on Twitter: @satelliteserve.