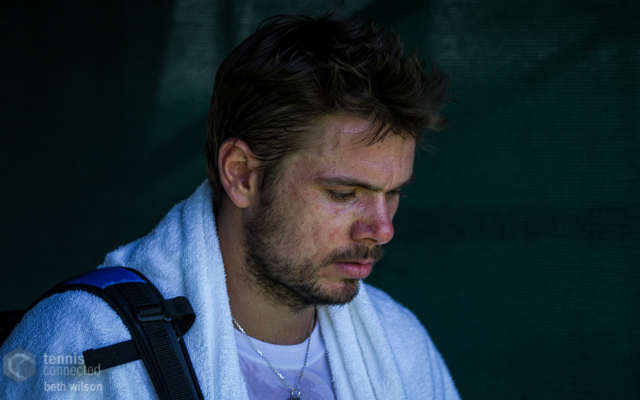 Andy Murray will play Tomas Berdych for a place in Sunday’s men’s singles final after the Scot ended Nick Kyrgios’ dream run with a straight sets win in their quarter-final on Day 9 of the tournament.

In windy conditions, it was a focused Murray who entered Rod Laver Arena, the Scot mixing up the pace of his shots and throwing in plenty of slice in an attempt to throw the big-hitting Aussie off his game. Murray came into the match as the best returner in the men’s tournament so far, and one break in the first set was enough to hand it to the 3-time Australian Open finalist, 6-3. Kyrgios refused to go away in the second set, sending it to a tiebreaker, but a couple of rash points on serve when up the mini-break proved costly for the teenager, as Murray collected the breaker 7 points to 5. Murray went up a break early in the third set before Kyrgios recorded his first break of the match, but the comeback was short-lived as Murray broke once more to set up a 6-3 7-6(5) 6-3 victory.

Earlier in the day, Tomas Berdych was the first man to book his place in the men’s semi-finals, the Czech claiming his first win in 18 matches over Spaniard Rafael Nadal with a commanding 6-2 6-0 7-6(5) victory. Having played just 8 tour level matches since June last year, Nadal’s lack of match practice was evident as the third seed was unable to convert any of his 4 break point chances for the match. Berdych again showed his fondness for the Melbourne Park hard-courts, thoroughly outplaying Nadal in the first couple of sets and then holding strong in the third set as Nadal tried his hardest to get back in the match.

In the women’s tournament, second seed Maria Sharapova produced another superb performance, defeating Eugenie Bouchard 6-3 6-2 in a match which was much closer than the scoreline would indicate. Wimbledon finalist Bouchard looked flat from the outset as Sharapova served well and maintained excellent depth on her groundstrokes throughout the match. A total of 30 unforced errors proved costly for Bouchard, as the Russian maintained her 100 percent record against the Canadian.

Sharapova will play countrywoman Ekaterina Makarova for a spot in Saturday’s final after the tenth seed outclassed third seed Simona Halep in a surprisingly one-sided contest. Similar to Bouchard, Halep looked sluggish and never managed to find her range. Makarova raced out to a 3-0 lead after 9 minutes and never looked back from there, taking the first set 6-4 and the second set 6-0 to wrap up the match in just 68 minutes.

This year’s Australian Open has been a tremendous success for the American women, and not only as a result of the Williams sisters. Madison Brengle and Madison Keys are two rising stars playing for the United States, and now Keys has a huge opportunity to move through to her first ever Grand Slam semi-final.

This is an interesting match-up between veteran Venus Williams, who at 34 has shown she is still capable of challenging and beating the world’s best, and Keys, a powerful young hitter who is tipped by many astute tennis followers as the next big thing to come out of America. I was very impressed with Venus’ commanding performance in the third set against Radwanksa in the round of 16 and I think her majestic serve and far greater experience will give her the edge in this match. That said, Keys has nothing to lose and will no doubt come out swinging. Williams in 3.

Dominika Cibulkova enjoyed a glorious run through to the final at Melbourne Park in 2014, the diminutive Slovak defeating the likes of Maria Sharapova before going down to Li Na in the championship decider. Cibulkova’s form in 2014 was patchy following her performance in Melbourne, but she seems to have recaptured her form back in Melbourne, downing two-time Australian Open champ Victoria Azarenka in a high-quality fourth round encounter.

Williams was severely tested against Muguruza in the round of 16, the top seed battling illness as well as a tough opponent. Williams showed plenty of heart to come through that match and, having had a day of rest, I think she will be in better health and form for this encounter. Cibulkova has only managed to claim a solitary set off Williams in 4 previous contests, and I think the world number one is too tough a test for the Slovak to pass today. Williams in 2.

These two are occasional hitting partners and so know each other’s game very well. Whilst Wawrinka won their first 2 encounters in 2012, but Nishikori outlasted the Swiss star in a gruelling 5-setter in New York last year en route to the final. Wawrinka’s power game is well known, whereas Nishikori is still making a name for himself outside his native Japan.

Nishikori is a brilliant mover around the court, but he’s also a potent shotmaker and not just a counterpuncher. His serve is also underrated, whilst the addition of former French Open champion Michael Chang to his coaching team has provided a boost to his confidence and self-belief. I think this match will go down to the wire, with both players having genuine chances to win. I’ll back Wawrinka, simply because of his past success in Melbourne, but to my mind this match is virtually a toss of the coin. Wawrinka in 5.

This pair played 3 times in 2014 and, whilst Raonic had his moments against the world’s best player, he was never able to achieve ultimate success against Djokovic. Raonic continues to improve as a player, with his backhand slice vastly improved in recent times. And, as Djokovic himself has acknowledged, Raonic ranks as one of the very best servers on the ATP Tour.

Obviously Raonic needs to serve well today to have any chance, but the Canadian also needs to ensure that he competes strongly on the Djokovic service games and doesn’t allow the top seed to cruise through on his serve. Raonic will look to keep the points short and out-hit Djokovic, whilst the top seed will seek to exploit Raonic’s inferior movement with long, punishing rallies. I think Raonic will win a set and trouble Djokovic in a couple of the others, but ultimately I think the world number one will move through to the semi-finals. Djokovic in 4.