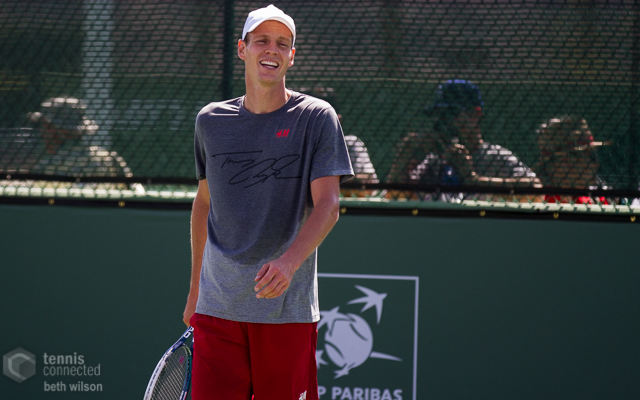 Day 9 is the first of two quarter-finals days in Melbourne, and there are plenty of stars in action, with Nadal, Murray, Sharapova and Bouchard all featured on the line-up on what promises to be a blockbuster day of tennis.

Rainy weather on Australia Day forced tournament organisers to close the roof on each of the major courts early in the day, but tennis fans were treated a high quality indoor match on Rod Laver Arena between Victoria Azarenka and Dominika Cibulkova. The feisty Slovak took the first set but, when Azarenka levelled the match at a set apiece and took an early break in the decider, it appeared as though Cibulkova was finished. But last year’s runner-up never stopped fighting, maintaining her aggressive shotmaking to record a terrific 3 set win over two-time champion Azarenka.

Cibulkova will now play top seed Serena Williams in the quarter-finals after the world number one scored a fighting win over Spain’s Garbine Muguruza. Muguruza was all over the Williams second serve in the first set, breaking twice as Williams was unable to convert any of her 6 break point chances. Although troubled by a cough, Williams refused to surrender, taking the second set and then surviving a marathon 12 minute service game early in the final set before pulling away to claim the win.

Rising star Madison Keys is through to her first Grand Slam quarter-final, the American defeating compatriot and good friend Madison Brengle in straight sets, much to the approval of coach Lindsay Davenport. If Keys wishes to advance to her maiden major semi-final, she will need to overcome another American, veteran Venus Williams, after the 34 year old saw off sixth seed Agnieszka Radwanska in 3 sets in the evening session at Melbourne Park.

In the men’s tournament, Kei Nishikori improved his record against David Ferrer to 6 wins in 9 matches, the Japanese star proving too strong for the veteran Spaniard, emerging victorious in straight sets. Nishikori will play defending champion Stan Wawrinka in the quarter-finals after the Swiss seed was forced to come back from 6-2 down in the fourth set tiebreaker against Guillermo Garcia-Lopez to claim the win and book his spot in the round of 8.

Top seed Novak Djokovic overcame stubborn resistance from Luxembourg’s Gilles Muller in the evening session on Rod Laver Arena, the world number one progressing after winning a trio of hard-fought sets. Djokovic will play Milos Raonic for a place in the semi-finals after the Canadian outlasted Spanish seed Feliciano Lopez in a pulsating 5-setter.

Halep has had a fantastic couple of seasons on the WTA Tour, bursting into the top 10 in the world in 2013 and then establishing herself as a major contender at the Grand Slams in 2014. At the start of the year, I suspected Halep might find it hard to maintain her momentum in 2015, but so far all the evidence is to the contrary, with the Romanian cruising through to the round of 16 without too many hiccups.

Makarova has been similarly impressive in moving through to the second week of the tournament, and it’s pleasing to see the Russian finally translating her doubles success into wins on the singles court. Makarova won’t be a pushover in this match, having been to the semi-finals in New York last year, but I think Halep is a better mover and has more versatility in her game. Halep in 2.

Eugenie Bouchard is 0 for 3 in career meetings to date with her one-time idol, Maria Sharapova, although the Russian was forced to fight all the way to beat the Canadian in last year’s French Open semi-finals. Wimbledon finalist Bouchard is one of the new generation of players snapping at the heels of the likes of Sharapova and Serena Williams, and after last year’s strong showings in the Grand Slams, the seventh seed most definitely has the requisite confidence and self-belief with respect to winning a major.

I thought the match-up with Peng Shuai in the round of 16 was a danger match for Sharapova, but the second seed performed superbly, exploiting Peng’s lack of reach and  playing the big points very intelligently. That allowed her to breeze through in straight sets, so she will be fresher than Bouchard, who was forced to labour for 3 sets to see off Begu. I think Bouchard will certainly have her chances in this match, but I’ll back Sharapova to advance with a 3 set victory. Sharapova in 3.

After winning 3 of his first 4 matches against Rafael Nadal, Tomas Berdych has endured a miserable run of late against the Spanish superstar, going down to Nadal in their last 18 encounters. That said, Berdych will probably never have a better chance to end his losing streak against the 14-time Grand Slam champion, as Nadal is still finding his feet on court after an injury-riddled second half of 2014.

The bouncy hard-courts in Melbourne suit Berdych to a tee, and the Czech has looked sharp in moving through to the quarter-finals without dropping a set. Third seed Nadal has to start as the favourite, but I think this match will be extremely close and I wouldn’t be surprised to see Berdych emerge as the victor. Look for Berdych to keep the points short while Nadal aims to grind the Czech into the ground. Nadal in 5.

Just how much does teenager Nick Kyrgios have left in the tank? That’s the question the fans in Australian are asking themselves. The Wimbledon quarter-finalist was mesmerising in coming back from match point down to defeat Andreas Seppi, but there’s no doubt that the match took plenty out of the 19 year old. Add that to a problematic back and I think Kyrgios will simply run out of gas against a high quality opponent in Murray.

Murray was extremely impressive in dismissing Grigor Dimitrov, calming the waters after the Bulgarian’s blistering start and producing the sort of tennis that enabled him to claim majors in 2012 and 2013. Murray won this pair’s only previous encounter in straight sets in Canada last year and, while I expect this match to be closer, I think the result will ultimately be the same. I think Kyrgios can jag a set and compete strongly in at least another, but that’s about it. Murray in 4.

That’s it for today. Enjoy the tennis and I’ll be back with another serve tomorrow. In the meantime, you can follow me on Twitter: @satelliteserve