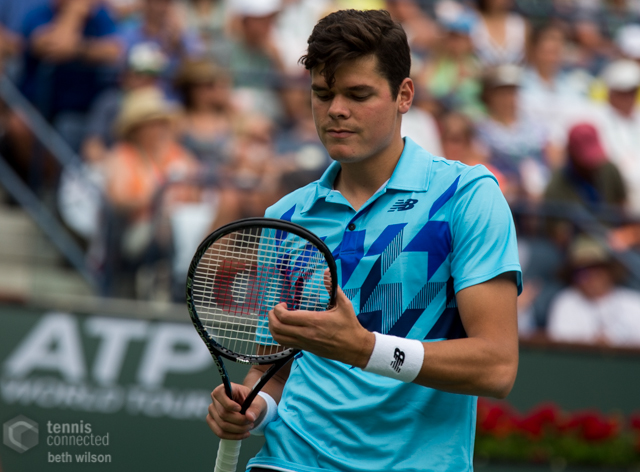 Local teenager Nick Kyrgios was the toast of Melbourne on Sunday night, the Aussie saving a match point en route to a miraculous comeback victory over Roger Federer’s conqueror Andreas Seppi in an absorbing fourth round duel.

When Seppi took the first two sets, it looked as though Kyrgios was about to hit the canvas. But a break to the 2014 Wimbledon quarter-finalist early in the third set gave him some hope, and when Kyrgios snatched the fourth set in a tiebreaker, it looked as though all the momentum was with the Aussie. Seppi was not done with yet, winning 12 consecutive points to rally from a 4-1 deficit in the final set, but Kyrgios kept his nerve, eventually closing out the match 8-6 in the decider after 3 hours and 34 minutes.

Kyrgios will now face Andy Murray for a spot in the semi-finals, after the Scot made the quarter-finals at Melbourne Park for the sixth successive year with a narrow victory over Grigor Dimitrov. The two seeds split the opening sets before Murray took the third to put himself in pole position. When Dimitrov led 5-2 in the fourth set, it seemed as though a fifth set was a near certainty, but 5 games in a row to Murray handed the former finalist a terrific win.

Earlier in the day, local hope Bernard Tomic was outgunned by Tomas Berdych, the Czech star too strong and steady on the big points. For the third consecutive year, Berdych is into the quarter-finals without dropping a set, but he faces a stern test next up in the form of Rafael Nadal. The Spanish superstar was forced to save 6 set points in the opening stanza against Kevin Anderson, but after taking the first set Nadal grew in confidence and ultimately claimed a 3 set win.

In the women’s tournament, second seed Maria Sharapova was in ruthless form, dismissing US Open semi-finalist Peng Shuai for the loss of just 3 games. Sharapova next faces Eugenie Bouchard, who overcame a mid-match meltdown to beat the Romanian Begu. Third seed Simona Halep was impressive in the night session, dismissing Yanina Wickmayer in straight sets, and will now face Ekaterina Makarova in the semi-finals after the Russian overcame Julia Goerges in straight sets.

Raonic might be the higher-ranked player of the pair, but previous matches between these players have always been close, with each player claiming 2 wins out of the 4 matches. Lopez collected the most recent match, on hard-courts in Canada last year, but I think Raonic will be a tougher proposition over 5 sets.

Both players enjoyed standout seasons in 2014, but the reality is that Lopez is in the twilight of his career whereas Raonic is still on an upswing. The Canadian’s serve is up there with the very best in the game, and he has been working diligently on his backhand in an effort to improve the most glaring weakness in his game. I’ll back Raonic to squeeze through this one in a tight 4-setter featuring a couple of tiebreakers. Raonic in 4.

Stan Wawrinka entered last year’s French Open as the Australian Open champion and a recent winner on clay in Monte Carlo, but the Swiss star quickly realised that reputations count for very little on the court, going down to Garcia-Lopez in the opening round at Roland Garros. I’m sure that in Paris Wawrinka was still adjusting to life as a Grand Slam champion, and all the pressure, commitments and expectations that come with such a title, but at the same time that win will give Garcia-Lopez plenty of belief going into this clash.

Wawrinka has been in good form so far 2015, winning the tournament in Chennai and looking strong in his opening few matches in Melbourne. I think Wawrinka is now more accustomed to the greater spotlight he is under, and Garcia-Lopez won’t be as big a threat on hard-courts as he is on clay. Look for Wawrinka to gain revenge for Paris with a convincing victory. Wawrinka in 3.

For the first time since 2011, Venus Williams is into the round of 16 at a Grand Slam, and the veteran American will be desperate to continue her winning ways today. Williams won in Auckland in the lead-up to Melbourne and if she is having a good serving day then Radwanska could be in real trouble.

Williams leads the head-to-head record 5-4, however it should be noted that Radwanska has won the past 3 matches between the pair. I wouldn’t be surprised in Venus turns back the clock with a win here, but I think Radwanska’s consistency and retrieval skills make her the favourite if the match goes into a deciding set. Radwanska in 3.

Just as Stan Wawrinka was shocked in Paris last year by Guillermo Garcia-Lopez, so too was Serena Williams stunned in the French capital in 2014. Defending champion Williams was upset by Spain’s Garbine Muguruza, who had been threatening to beat an elite player in the months leading up to the French Open.

Williams will be gunning for revenge in this clash and, while Serena very rarely fails to get what she wants, it should be emphasised that Muguruza is the real deal, with former Wimbledon champion Conchita Martinez considering her a Grand Slam contender in 2015. That might be slightly optimistic, but there’s no doubt Muguruza is one to keep an eye out for. That said, I think Williams will be too focused and too strong for the Spaniard in this clash. Williams in 2.

She might be unseeded this year after an injury-plagued 2014, but Victoria Azarenka has once again demonstrated her fondness for the bouncy blue hard-courts at Melbourne Park by waltzing into the round of 16. The Belarusian is still not quite back to her best, but even at 90 percent Azarenka is a major threat to the rest of the players on the WTA Tour.

Cibulkova’s form fell away a bit last year after a tremendous start to the season in Melbourne, but last year’s finalist is a feisty competitor who beat Azarenka in their last encounter. That said, Azarenka has won 6 of the 8 meetings between the players, and I favour the two-time champion to claim career win number 7 over Cibulkova in this one. Azarenka in 3.

Put your house on: Novak Djokovic. The top seed should cruise past Luxembourg’s Gilles Muller without so much as breaking a sweat.

Likely to go the distance: As noted above, I think the match between Venus Williams and Agnieszka Radwanska is destined for 3 long sets.