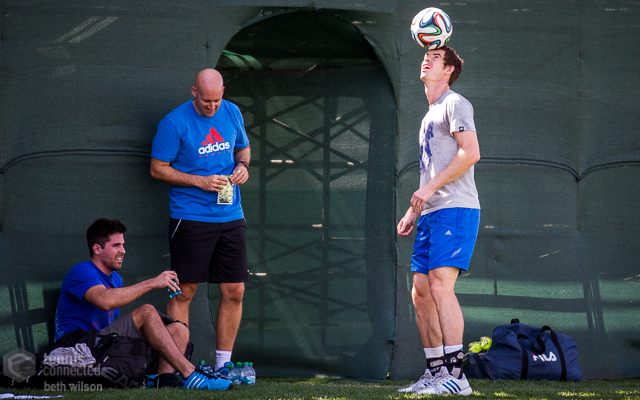 For the first time in 4 years, both Williams sisters are through to the fourth round of a Grand Slam, with Venus and Serena each forced to fight back from a set down to claim a spot in the round of 16.

After Venus Williams came from a set and a break down against Camila Giorgi to make the round of 16 at a major for the first time since Wimbledon in 2011, sister Serena repeated the comeback act against upcoming Ukrainian Elina Svitolina, the top seed roaring back to win in 3 sets. Venus will next face Polish seed Agnieszka Radwanska, whilst Serena will square off against Garbine Muguruza, who upset the world number one in Paris last year.

In the men’s tournament, Stan Wawrinka was all business in a straight sets win over Jarrko Nieminen, whilst Feliciano Lopez and Milos Raonic notched 3 sets wins over Jerzy Janowicz and Benjamin Becker respectively. Kei Nishikori bounced back from the loss of the first set to defeat Steve Johnson in 4 sets, but John Isner was ousted by Gilles Muller. Top seed Novak Djokovic was a winner in the night session, surviving a tight first set tiebreaker against Fernando Verdasco before wrapping up the match in straight sets.

Almost certainly the pick of the fourth round matches, this mouthwatering clash pits Olympic gold medallist and two-time major winner Andy Murray against rising star Grigor Dimitrov, who showed he was ready to take the next step in the majors by whipping Murray on his home turf at Wimbledon last year.

Coach Roger Rasheed will be in Dimitrov’s ear in the lead-up to this match, telling him that he belongs in the upper echelon of men’s tennis and that he can definitely win this match, but I have been very impressed with Murray’s form in the lead-up to this tournament, both in Abu Dhabi and Perth. After taking a good 12-15 months to find his feet again after major back surgery, Murray again seems to be in the form that makes him a major contender in the Grand Slams. Little will separate the pair in this match, but I think Murray looks super fit after his offseason training in Miami and Dubai, and that could prove decisive down the stretch. Murray in 5.

The Australian Open hard-courts certainly suit Tomas Berdych’s game, the bouncy surface assisting the Czech’s free-flowing, hard-hitting approach. The two-time Davis Cup champion made the semi-finals of the tournament last year, going down to eventual champion Stan Wawrinka in a tight match, and will again fancy himself to feature in the latter stages of the tournament.

Bernard Tomic had a wretched season in 2014, the Aussie being significantly affected by his double hip surgery. However, Tomic seems to be moving freely around the court once more and is the sort of player who could cause a boilover against a seed of Berdych’s calibre. Berdych has won both their previous meetings, each at Wimbledon, however both matches were close encounters. I expect Tomic, spurred on by the home crowd, to push Berdych all the way, but the Czech’s power game and superior fitness will likely see him through. Berdych in 5.

The parochial Australian fans would normally be cheering for the very likeable Roger Federer, but I suspect they were pretty happy to see Andreas Seppi upset the Swiss superstar, as it meant that hometown boy Nick Kyrgios got a far more winnable round of 16 match-up as a result. Despite having back problems coming into the tournament and having limited match practice of late, Kyrgios has once again shown his ability to produce his best tennis on the biggest stages.

Seppi showed his abilities in beating Federer, but I wonder how the Italian will fare trying to back up from that momentous victory. I suspect Seppi might find it difficult to reproduce the magic of Friday’s win over the second seed, and with the home crowd cheering on Kyrgios, I’ll back the Aussie to make it through to the quarter-finals. Kyrgios in 4.

Big serving South African Kevin Anderson presents a far different match-up for Rafael Nadal than the Spaniard’s last opponent, the diminutive Dudi Sela. Lanky Anderson has the ability to blast players off the court but I think Nadal is well and truly up and running in the tournament now after his second round scare against American Tim Smyczek.

I’m sure that at least one of the sets will go to a tiebreaker, but look for Nadal to take big cuts at the Anderson second serve and make the most of his rare opportunities to break the South African’s serve. Anderson is not without a hope, but I’m predicting that Rafa will squeeze his way through in 4 tight sets. Nadal in 4.

Chinese seed Peng had a strong finish to 2014, making the round of 16 at the All England Club and then reaching the semi-finals at the US Open. She’s a crisp, compact hitter who moves well around the court and who will make Sharapova pay if the Russian has one of her bad serving days. Sharapova scraped through against compatriot Alexandra Panova in round 2 before thrashing the talented Kazakh Zarina Diyas in round 3.

Peng is always steady, but Sharapova is the better shotmaker of the pair and the more aggressive player, so the match is on the second seed’s racquet, so to speak. There might be a fair bit of shrieking and grunting involved, but I think the former champion will get the job done today. Sharapova in 3.

Put your house on: Eugenie Bouchard. The Wimbledon finalist should have far too much game for Romania’s Irina-Camelia Begu.

Upset alert: I think that at least one of the Aussies in action today will notch an upset win. Kyrgios over Seppi is probably a safer bet than Tomic over Berdych, but you never know.

Likely to go the distance: Belgian Yanina Wickmayer is in good form at present and could well stretch Romanian third seed Simona Halep to 3 sets in their round of 16 clash today.