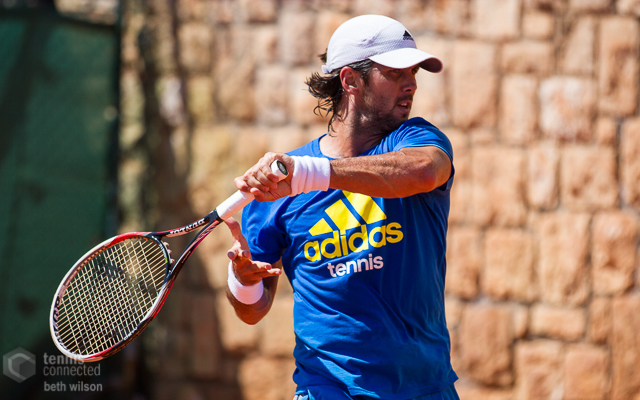 For the first time since 2001, the men’s singles round of 16 at Melbourne Park won’t feature Roger Federer, after the second seed was sensationally knocked out of the tournament on Day 5 by Italy’s Andreas Seppi.

Seppi had never previously beaten Federer, and had taken just one set off the Swiss superstar in all of their previous matches, but the Italian started strongly, breaking Federer to love to claim the opening set and then taking the second in a tiebreaker to set up a commanding lead. Federer got the third set but, despite winning more points than Seppi for the match, ultimately went down in 4 sets. Federer’s upset is good news for Nick Kyrgios who set up a meeting with Seppi by beating Tunisian Malek Jaziri.

Andy Murray and Grigor Dimitrov set up a marquee fourth round showdown in contrasting styles, with Murray cruising past Joao Sousa and Dimitrov forced to 5 sets to see off former finalist Marcos Baghdatis. Rafael Nadal thrashed Dudi Sela to set up a clash with big-serving Kevin Anderson, whilst Bernard Tomic and Tomas Berdych booked a fourth round showdown by defeating Sam Groth and Viktor Troicki respectively.

As I said at the outset of the tournament, Serena Williams is head and shoulders above the rest of the players on the WTA Tour when she puts her mind to the job. So far, the American has been steady without being spectacular, but that’s not a big issue, as she will aim to peak in the second week of the tournament.

Svitolina is a rising star on the women’s circuit and has now made the round of 32 at Melbourne Park in consecutive years. She’s definitely one to watch for the future, but I don’t think she will have the composure on the big stage to truly threaten Williams. Williams in 2.

One only has to think back to the pulsating semi-final at Melbourne Park played out between Fernando Verdasco and his more esteemed compatriot Rafael Nadal to remember just how dangerous Verdasco can be on hard-courts, especially when he gets his confidence up and his serve and forehand firing. On one hand, Djokovic will see Federer’s defeat as giving him an even better chance of winning the title; on the other hand, Djokovic will know that he needs to keep his guard up against a challenging opponent today.

Verdasco has nothing to lose, so I expect him to come out all guns blazing. But even if the Spaniard manages to fire on all cylinders for a while, he has a tendency to get tight in big match situations, and I think that Djokovic will get the better of him on the big points. Djokovic in 4.

Two-time Wimbledon champion Petra Kvitova showed in her demolition of Eugenie Bouchard in the 2014 final at the All England Club that she deserves to belong in the very top tier of women’s tennis, and now it is time for the Czech star to make her mark in the other Grand Slams. Kvitova has had an ideal preparation for the year’s first major, winning the title in Sydney before travelling to Melbourne, and I think she has to be considered one of the favourites for the title.

Keys is a highly rated American youngster who, with former star Lindsay Davenport now by her side, is sure to continue to progress through the ranks in the next 12 months. Keys showed plenty of grit in fighting back from a set down to beat Aussie seed Casey Dellacqua in round 2, but I fear a win over Kvitova might be step too far right now. Kvitova in 2.

Spanish seed Feliciano Lopez is pretty fortunate just to be in the third round of the tournament, after he was forced to eke out a 10-8 fifth set win over the American Kudla in round 1 and got lucky in round 2 when his opponent, Adrian Mannarino, was forced to retire when in a winning position. Janowicz has been more impressive in contrast, completing a gutsy 5 set win over French seed Gael Monfils in the second round.

This should be an enjoyable match to watch, with Lopez’s old-school all-court game contrasting with Janowicz’s huge serve and raw power game. I think this is definitely a winnable match for the Pole, but I’ll back Lopez to get back in form with a hard-fought win here. Lopez in 5.

Pencil in a long match featuring plenty of drawn-out rallies between these two baseline battlers. Former French Open finalist Ferrer is super-fit and as tenacious as they come, whilst Simon is a very adept mover around the court and an extremely good counterpuncher.

Ferrer has the better record in the majors and, whilst Simon has claimed his fair share of big-name scalps over the years, the smart money is on the Spaniard to prevail in this one. Ferrer is probably no longer at his peak, but he’s still a force to be reckoned with. Ferrer in 4.

Put your house on: Stan Wawrinka. After his Swiss countryman Federer was upset yesterday, let’s hope the defending champion can get the job done against veteran Finn Jarrko Nieminen today.

Likely to go the distance: I reckon American Steve Johnson is an underrated player, and I’m backing him to make life difficult for fifth seed Kei Nishikori in their match today.