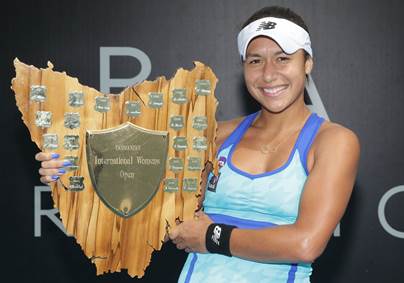 Heather Watson is the top-ranked British female tennis player and has represented her country in the Federation Cup and the Olympic Games, held in London in 2012. Heather won the 2009 Junior US Open Singles Title, the only female Briton to claim that title. In 2012, she achieved her first WTA Tour singles title in Osaka, and her first doubles title in Stanford. Heather reached a career peak ranking of 39 in 2013 before dropping outside the top 150 after contracting glandular fever. After making a full recovery in 2014, Heather fought her way back into the top 50, and is currently ranked 38 in the world for female tennis players.

Commenting on the signing, Heather Watson said: “I am really excited about my new partnership with such a cool and innovative global brand as New Balance. It is a great honour for me to be welcomed into the New Balance sporting family and I am looking forward to playing my own part in the brand’s growing tennis ambitions.”

Bruce Schilling, General Manager of New Balance Tennis, said: “We are thrilled to have Heather Watson join the New Balance family. She is recognised as one of Great Britain’s most promising and exciting young tennis players and her values align nicely with those of our brand. This association will enable the brand to continue developing its global reputation for high performance tennis products. It also signals the company’s steadfast commitment to working closely with the world’s top tennis players.”

Heather Watson’s association with New Balance comes after the 2013 signing of top-ranked men’s tennis player Milos Raonic as the brand drives to build a formidable presence in the tennis market worldwide.

Tennis, A Great Sport For Everyone