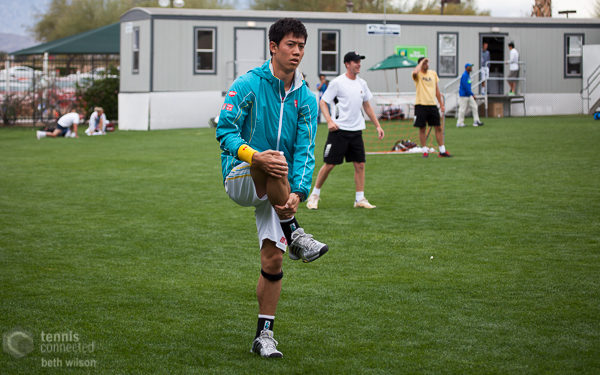 Two former champions, Maria Sharapova and Rafael Nadal, were pushed to the very brink of elimination on Day 3 before showing their fighting qualities and recording comeback victories.

Sharapova was forced to save 2 match points in her match against fellow Russian Alexandra Panova, eventually prevailing in 3 sets over the world number 150 in 2 hours and 32 minutes. It was smoother sailing for the other women’s seeds in action on Day 3, with 2014 Grand Slam finalists Eugenie Bouchard and Simona Halep progressing in straight sets. Also advancing was Russian Ekaterina Makarova, China’s Shuai Peng, Italian Sara Errani and rising star Karolina Pliskova.

In similar fashion to Sharapova, Rafael Nadal was forced to scrap his way to victory against courageous American Tim Smyczek, the Spaniard overcoming a 2 sets to 1 deficit before ultimately prevailing 7-5 in the decider. Roger Federer overcame a troublesome finger to beat Simone Bollelli in 4 sets, while Tomas Berdych and Andy Murray recorded routine victories.

There was good news for Aussie fans, as Nick Kyrgios upset Ivo Karlovic and Bernard Tomic ousted Philipp Kohlschreiber, whilst Sam Groth outlasted fellow Aussie Thanasi Kokkinakis in 5 sets to set up a meeting with Tomic. Other seeds to fall on Day 3 included Lukas Rosol, who went down to Dudi Sela, Leonardo Mayer, who was beaten by Viktor Troicki, and David Goffin, who was outplayed by former finalist Marcos Baghdatis.

Croat Ivan Dodig is a former top 30 player with some serious victories to his name, able to claim wins over Nadal, Raonic and Juan Carlos Ferrero, among others. The Croat hasn’t had the best last 12 months, seeing his singles ranking slide even as his doubles career continues to prosper, but he’ll give Nishikori a decent run for his money.

Nishikori was very solid against Almagro in round 1, maintaining a consistent level against a dangerous opponent, and not letting the Spaniard get into a rhythm. I think Nishikori can do very well in this tournament, and I’ll back him to come through this test with flying colours. Nishikori in 3.

Former world number 2 Vera Zvonareva has endured a miserable couple of years, having suffered from various injuries, including shoulder and hip problems. But the two-time Grand Slam finalist is back on court and working her way back up the rankings.

Even at its best, Zvonareva’s counterpunching game isn’t the sort of game that world number one Serena Williams loses sleep over, the American knowing that she will always dictate play in such circumstances. I think Serena will get through this one pretty easily, but I’m intrigued to see just how well Vera fares. Williams in 2.

Former teen prodigy Donald Young hasn’t ever quite lived up to expectations as a professional, but the American leftie is still a dangerous player and has claimed some tremendous scalps over the years, including the likes of Andy Murray.

Raonic had a terrific 2014 season and, having made the Wimbledon semi-finals in 2014, will firmly believe that a Grand Slam final is next on his to do list. Armed with a ballistic serve and an ever-improving backhand, it’s hard to bet against him. Raonic in 4.

Former Wimbledon semi-finalist Jerzy Janowicz got a lucky break when former US Open champion Juan Martin Del Potro was forced out of the tournament  with ongoing wrist problems. Del Potro had been drawn to play the Pole in round 1, but instead Janowicz faced a qualifier and cruised through to round 2.

Janowicz isn’t so lucky in round two, as he faces electrifying French seed Gael Monfils. The seventeenth seed performed impressively in New York last year and will be looking for another strong showing at the first major of 2015. If he can make some inroads on the Janowicz serve and maintain his consistency, I’ll back Monfils to notch the win. Monfils in 5.

Aussie Casey Dellacqua enjoyed the most season of her career in 2014 and has been rewarded with a seeding at her home Grand Slam. The tenacious baseliner has scored some big wins at Melbourne Park over the years, and will be looking to put in another deep run in front of the patriotic Australian fans.

Keys is a rising star and the American will learn plenty from new coach Lindsay Davenport, a former world number one and multiple Grand Slam champion. Keys is a natural athlete and has plenty of tennis talent to match, hence why expectations are high. I’ll back the American to prevail in this one, but only by a whisker. Keys in 3.

Put your house on: Defending champion Stan Wawrinka. The Swiss star should be far too good for his second round opponent Marius Copil.

Likely to go the distance: Pencil in 5 sets for the clash between Frenchman Adrian Mannarino and Spanish seed Feliciano Lopez.

That’s it for today. Enjoy the tennis and I’ll be back with another serve tomorrow.