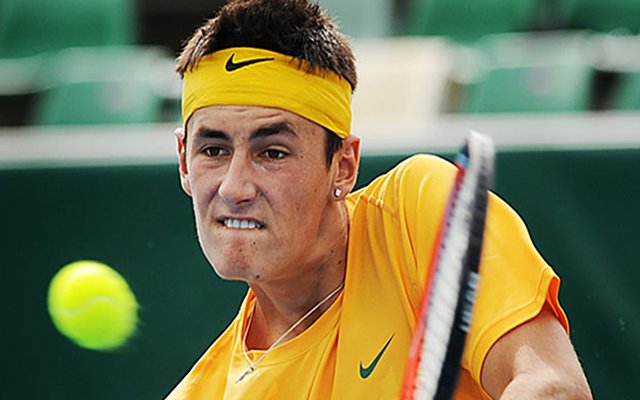 Djokovic showed that he has well and truly recovered from his recent illness, the Serb cracking 30 winners to cruise past Slovenia’s Aljaz Bedene. Wawrinka was even more ruthless against Marsel Ilhan, granting the Turk just 7 games for the entire match. Other winners on the men’s side on Day 2 included Aussie veteran Lleyton Hewitt, seeds John Isner, Gilles Simon and Milos Raonic, and Raonic’s countryman Vasek Pospisil, who enjoyed a fighting 5 set win over American Sam Querrey.

Fifth seed Kei Nishikori enjoyed a fine win over the dangerous Nicolas Almagro, as Spaniard Roberto Bautista Agut progressed with a victory over rising star Dominic Thiem. However, the news wasn’t so good for seeds Fognini, Benneteau and Dolgopolov, each of whom was bundled out of the tournament on Day 2.

Among the women in action on Day 2 were the Williams sisters, both of whom breezed through to round 2, and Victoria Azarenka, who defeated a somewhat flat Sloane Stephens. Caroline Wozniacki overcome stubborn early resistance from Taylor Townsend before progressing, while Kvitova, Radwanska, Cornet and Cibulkova were all in the winners’ circle on the second day of play.

The miserable run of German seeds at the tournament continued on Day 2, with Andrea Petkovic joining compatriots Lisicki and Kerber on the sidelines. Jelena Jankovic also exited the tournament, whilst Italian seed Flavia Pennetta was upset by countrywoman Camila Giorgi.

One of the feel-good stories of the first round was Aussie Jarmila Gajdosova finally scoring a win in a singles match at the Australian Open on her tenth attempt. Ranked as high as 25 in the world in 2011, Gajdosova is on the comeback trail after a woeful couple of injury-plagued seasons in 2012 and 2013. The 2014 season saw the Aussie move back inside the world’s top 100 and Gajdosova is definitely a dangerous floater in any draw, given how hard she smacks the ball.

2014 French Open finalist Simona Halep will be looking to capture a Grand Slam title in 2015 after being a top contender at the majors in 2014. Whereas Gajdosova is purely and simply a power hitter, Halep is a far more nimble player, mixing great court coverage and anticipatory skills with a variety of spins and slices. I think Gajdosova could cause the third seed some anxious moments, but I expect Halep to prevail in the end. Halep in 2.

Murray beat Matosevic without too many problems at the Hopman Cup in Perth a few weeks ago, but the cauldron-like atmosphere of a Grand Slam is very different to the far more relaxed atmosphere of an exhibition event. That said, Murray’s form in the run-up to Melbourne has been impressive and I think that, probably for the first time since he won Wimbledon in 2013, Murray truly believes he has a realistic chance of winning another major.

Murray is a three-time finalist in Melbourne and so the Scot is obviously at home on the blue hard-courts. Matosevic is a feisty competitor who can get on some serious hot streaks, so Murray will need to remain focused throughout the match. Look for the Aussie to push hard for a set and a half but for Murray to ultimately finish the stronger. Murray in 4.

Veteran Italian Roberta Vinci is not only the world’s top-ranked doubles player; she’s also pretty handy on the singles court, having been ranked as high as 11 in the world. Vinci’s classic game has twice seen her progress to the quarter-finals of the US Open, but the Italian has her work cut out for her today against Russian dark horse Ekaterina Makarova.

Tenth seed Makarova often flies under the radar at the majors, but the Russian was a semi-finalist in New York last year and a quarter-finalist in London, and has made the Australian Open quarter-finals on two previous occasions. Whilst Vinci’s singles career is on a downward slide, Makarova’s is peaking, and so I’ll favour the Russian to get the job done today. Makarova in 3.

He might have destroyed a few racquets along the way (and may ultimately have a lighter wallet after some volatile outbursts), but the important thing for Nick Kyrgios is that he managed to get through his first round match against Federico Delbonis. Coming into the tournament with back problems, Kyrgios ground out the win against Delbonis but the Aussie faces a tall order against Ivo Karlovic in round 2.

Croatian seed Karlovic upset Novak Djokovic  in Doha recently and, on the verge of turning 36, is still a formidable serving machine. Unsurprisingly, the key in this match is for Kyrgios to take care of his own service games and to capitalise on the fleeting opportunities he gets on the Karlovic serve. If he can do that, I think Kyrgios can score an upset. Kyrgios in 5.

It was a poor 2014 season for former boy wonder Bernard Tomic, but it should be noted that the Aussie always plays well at home, having made the round of 16 in 2012 and the third round on a couple of other occasions. He will need to be on song today against the consistent German Philipp Kohlschreiber. Seeded 22, the German had another solid year on tour in 2014 and has also enjoyed success at Melbourne Park, having made the round of 16 on three previous occasions.

If Tomic was in red-hot form, then I would say that this is definitely a winnable match for him. But I just don’t think the Aussie has enough match fitness at present to challenge a player of Kohlschreiber’s calibre in a best of 5 sets match. No doubt the crowd will spur Tomic on, but I’m backing the reliable German to prevail in this clash. Kohlschreiber in 4.

Put your house on: Maria Sharapova. The former champion should make short work of her Russian compatriot Alexandra Panova.

Likely to go the distance: It’s always tough playing a countryman, and I think the all-Aussie clash between big-serving Sam Groth and rising star Thanasi Kokkinakis will go all the way to 5 sets. Look for Kokkinakis to give it his all but, after surviving Gulbis, I don’t think the kid will have enough in the tank to ultimately get past Groth.