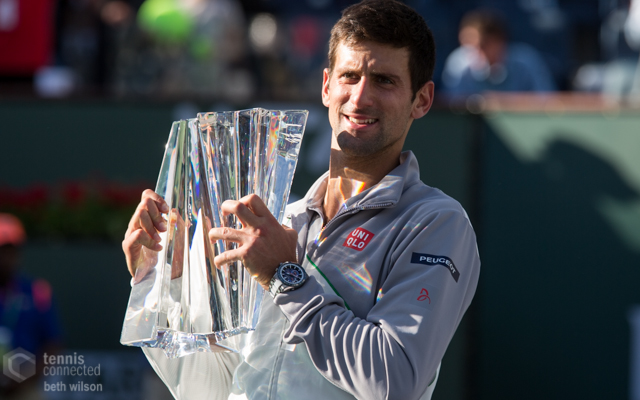 Three-time defending champion and world number one Novak Djokovic will compete for a fourth crown in Abu Dhabi when he takes on Scot Andy Murray, winner of the inaugural event in 2009, in today’s final of the Mubadala World Tennis Championship.

Both men posted impressive victories in the semi-finals on Friday, with Murray thrashing 14-time Grand Slam champion Rafael Nadal 6-2 6-0 in 88 minutes. Having been humbled at the hands of Roger Federer in the 2014 season-ending championships in London, Murray handed out a beating of his own yesterday, keeping the Spanish superstar at bay throughout the match. Murray looked fit and focused, hitting extremely cleanly from the back of court and exhibiting cat-like court movement. However, the Scot clutched his left shoulder at various stages during the match, and will have a scan on the shoulder today before confirming his ability to compete in the final of the exhibition event.

For Nadal fans, the result wasn’t as bad as it may appear at first blush. The world number 3 hit the ball solidly from the baseline, although he lacked consistency and conviction on his backhand wing, and was able to produce 14 break point opportunities. Unfortunately for the Spaniard, he was unable to capitalise on any of those chances. The match practice will be invaluable for Nadal as he continues his return to competition after managing just 7 matches post-Wimbledon in 2014. The 9-time French Open champion moved well on court and showed no signs of the injuries that thwarted the majority of his 2014 season. And I have no doubt that his decision-making skills and patience on-court will improve as he gets more matches under his belt.

The second semi-final followed a similar trajectory to that of the first semi-final, with Djokovic racing out of the blocks and putting himself in a dominant position against a sluggish and seemingly shell-shocked Stan Wawrinka. The Swiss world number 4 had looked pretty sharp against Almagro in his opening match, but Djokovic’s laser-like returns nullified Wawrinka’s big serve and repeatedly caught the Australian Open champion out of position and forced to hit half-volleys when off-balance. In front of a capacity crowd, the Serb’s love affair with the courts at Zayed Sports City showed no signs of slowing, with the world number one eventually earning a 6-2 6-1 victory to book his place in the final and underlining his status as the clear favourite heading into the Australian Open.

With Nicolas Almagro having beaten compatriot Feliciano Lopez in yesterday’s fifth place play-off, today’s action sees Nadal take on Wawrinka in the play-off for third place, before Murray and Djokovic square off in the final. I think we will see a far more consistent Nadal out on court today, and if Wawrinka is as sluggish as he was last night then the Spaniard will have a golden opportunity to claim his first win of 2015. Nadal has repeatedly stressed that his main focus at this point in time is simply getting more time on court in real match conditions, as opposed to winning matches, but nothing boosts a player’s confidence as much as scoring wins over high-quality opponents. Look for Nadal to edge Wawrinka in a tight 3-setter.

Tonight’s finalists have played each other many times, stretching back to their junior days, and while Djokovic holds a 15-8 career advantage and has won 7 of the last 8 matches the pair has played, Murray has claimed some important wins over the Serb in the last few years, including in the 2012 US Open final and the 2013 Wimbledon final. Murray was terrific last night, and I think he will push Djokovic much further than he has been pushed in recent years in Abu Dhabi. However, Djokovic showed last night that Abu Dhabi provides the perfect conditions for his particular brand of tennis, and I think he will ultimately prevail in a hard-fought 3 set final.

That’s it for today. I’ll be back tomorrow to recap today’s matches. In the meantime, follow me on Twitter: @satelliteserve for all the latest news and analysis from Zayed Sports City in Abu Dhabi.