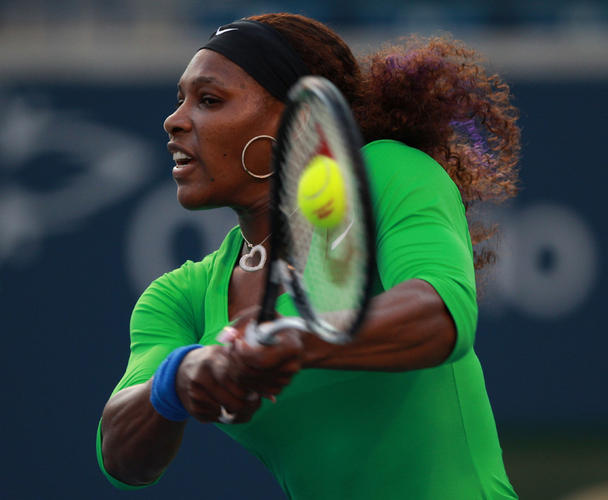 Roger Federer is back in the US Open semi-finals for the first time since 2011, the 5-time champion saving 2 match points to defeat Gael Monfils in an electrifying night session on Day 11. Meanwhile, Day 12 is ladies’ semi-finals day at Flushing Meadows, with Serena Williams and Caroline Wozniacki looking to book their spots in Sunday’s final.

The day session saw Croat Marin Cilic hoping to advance to his second career Grand Slam semi-final. Standing in his way was sixth seed and former Wimbledon finalist Tomas Berdych. Cilic raced out to an early lead against the Czech Davis Cup star, breaking Berdych in the opening game of the match and never surrendering his advantage.

Berdych, who had held 60 of his 64 service games heading in to the quarter-final, was all at sea on serve in the blustery conditions, dropping serve 4 times in the first set and a half alone. In contrast, Cilic was ruthlessly efficient on serve, dropping just one point on his first service points in the second set. A brief fightback by Berdych at the beginning of the third set, which saw the sixth seed go up a break, was halted when a double-bounce ruling by the umpire shattered the Czech’s focus. The set went to a tiebreaker, with Cilic proving too solid and claiming a straight sets win in a touch over 2 hours.

In order to advance to his first ever Grand Slam final, Cilic will need to overcome 17-time major winner Roger Federer, who was forced to pull out all the stops to halt the charge of Gael Monfils. The Frenchman dominated the early stages of the encounter, claiming the opening 2 sets of the match to put Federer on the verge of a surprise exit.

Monfils then had a pair of match points on Federer’s deep in the third set but the Swiss star showed his experience, saving both and going on to claim the set. From there, the match had a sense of inevitability about it, with Federer growing in confidence and Monfils starting to falter. By the time the match entered a deciding set, the 33 year old Federer was in full flight, racing to a 5-1 lead before closing out a memorable win in 200 minutes.

Shuai Peng has looked switched on from the very start of the tournament, which saw her upset fourth seed Agnieszka Radwanska in the second round. Peng has added other seeds to her list of scalps, including Roberta Vinci and Lucie Safarova, and the Chinese player will not hold back against Wozniacki today. Double-handed off both sides, Peng is a very effective returner and is more powerful than Wozniacki from the baseline.

Wozniacki has enjoyed a resurgence in the last few months, winning the title in Istanbul and performing very solidly in the North American swing coming into New York. Training for the New York marathon seems to have improved Wozniacki’s stamina, as evidenced against Sharapova, and her confidence, which must have taken a beating after her drop down in the rankings and her split from Rory McIlroy. Wozniacki is in fine form and has more experience at this stage of big tournaments, and I sense she will be more composed on the big points. Wozniacki in 3.

Ekaterina Makarova has been very consistent in the majors in the last few years and has had a superb tournament to date, highlighted by a win over former world number one Victoria Azarenka in the quarter-finals. Makarova is into her first Grand Slam semi-final, but as a former French Open doubles winner the Russian should not be overawed by the big stage. Makarova has also beaten Serena Williams in a Grand Slam before, upsetting the American at Melbourne Park in 2012.

Williams has beaten Makarova in their other 3 clashes, and the top seed has been simply unstoppable at Flushing Meadows so far this year, dropping just 22 games across 5 matches. The two-time defending champion will look to obtain plenty of cheap points on serve and to keep the points short against Makarova. Look for Williams to step inside the baseline on the Makarova serve and to employ her preferred brand of first strike tennis. I think the Russian will battle valiantly, but I can’t see Williams losing this one. Williams in 2.