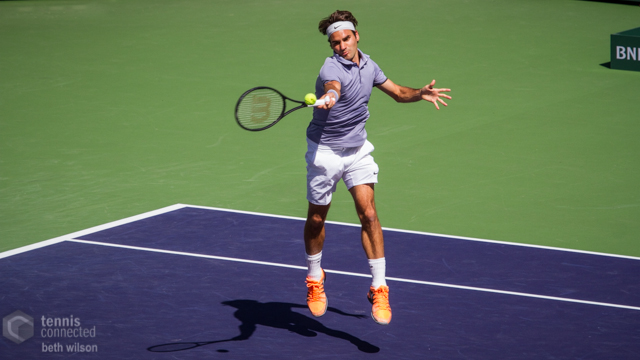 Kei Nishikori became the first Japanese male since 1918 to make the US Open semi-finals, the tenth seed outlasting third seed Stan Wawrinka in 5 sets in a thriller on Day 10 of the tournament.

Having not finished his fourth round match against Milos Raonic until 2:26am on Tuesday morning, there were plenty of doubters when it came to injury-prone Nishikori’s chances against Australian Open champion Wawrinka. The Swiss star, who went into the match with a perfect record against Nishikori, took an early lead before the Japanese player gained the ascendency by claiming the second and third sets. Wawrinka refused to give up, taking the fourth set in a tiebreaker to force the match into a deciding fifth set, but the third seed was unable to stay with Nishikori in the latter stages, the tenth seed eventually claiming victory after 4 hours and 15 minutes.

Nishikori will battle top seed Novak Djokovic for a place in Monday’s final after the Serb took down former champion Andy Murray in a pulsating 4-setter. Murray adopted a far more aggressive approach than is usual for the Scot, going all out on his forehand wing as he endeavoured to dictate play against the world number one. The first two sets were split via tiebreakers before Djokovic cruised through the third set and took advantage of some back troubles encountered by Murray in the fourth set to book his spot in the semi-finals.

Earlier in the day, Russia’s Ekaterina Makarova advanced to her first ever Grand Slam semi-final, defeating two-time major champion Victoria Azarenka in straight sets, 6-4 6-2. The Russian recovered from an early deficit against the Belarusian, who looked flat and was apparently affected by food poisoning in the lead-up to the match. Azarenka smashed her racquet in frustration when she went down a break in the second set, but it was to little avail, with Makarova proving far too steady and consistent on the day.

Makarova faces an almighty challenge if she is to advance to the tournament final, with two-time defending champion Serena Williams standing in her way. The 17-time major champion proved too good for fellow veteran Flavia Pennetta on Day 10, registering a 6-3 6-2 victory and remaining on course for her first Grand Slam of the year.

Tomas Berdych and Marin Cilic are very similar players and embody the modern tennis professional. Both players are lean, lanky, powerful and pretty good movers, given their height. Former Wimbledon finalist Berdych has had the more decorated career to date, although Cilic has made the Australian Open semi-finals previously.

Cilic beat Berdych in a tight match at Wimbledon in July, although Berdych owns a 5-3 career advantage over the Croat, and has won 3 of their 4 meetings on hard-courts. The players are fairly evenly matched from the back of the court, with Cilic probably having the better backhand and Berdych owning a more effective forehand. I think this match will be decided by the serve and return of serve.

Cilic has improved his serve significantly under the tutelage of Goran Ivanisevic, but Berdych has been in tremendous serving form to date in this tournament. Berdych plays his best tennis on fast hard-courts, where he can get on top early in points and dictate play from thereon. I predict this to be a close encounter, but I’ll back the Czech to gain revenge for his defeat by Cilic at the All England Club earlier this year. Berdych in 5.

Roger Federer has been predictably consistent at Flushing Meadows this year, easing through to the quarter-finals with a minimum of fuss. Gael Monfils has been unpredictably consistent in New York to date, shunning his usual lapses of concentration and mood swings to progress to the final 8 without dropping a set.

It’s not as though Monfils has benefitted from an easy draw – the Frenchman whipped compatriot Richard Gasquet in the third round and then edged past Wimbledon semi-finalist Grigor Dimitrov, coached by Monfils’ ex-coach Roger Rasheed, in a fiery round of 16 clash.

Monfils is without a coach at present, and it seems to be suiting him just fine, with the flamboyant Frenchman producing some of the most consistent tennis of his career in this tournament. Federer leads Monfils 7-2 in head-to-head meetings, although both of Monfils’ wins have come on hard-courts, including in Shanghai last year. I think Monfils will push Federer in this one, but in his current rich vein of form, I can’t go past the Swiss superstar. Federer in 4.