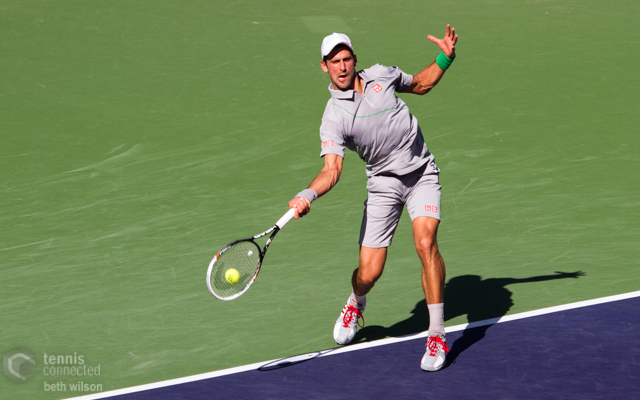 China’s Shuai Peng is into the first Grand Slam semi-final of her career, becoming just the third Chinese player to reach the final 4 of a major by defeating teenage prodigy Belinda Bencic in straight sets on Day 9.

The unseeded Peng, competing in the thirty-seventh Grand Slam of her career, was forced to save a pair of break point points in her opening service game, but from there the Chinese player was largely untroubled, dictating the rallies and not allowing Bencic to get into the match. Peng, who has yet to drop a set in New York this year, eventually wrapped up the match 6-2 6-1 in just over an hour.

Peng will play former finalist Caroline Wozniacki for a place in the final after the Dane thrashed Sara Errani under lights in Tuesday’s night session. Errani is a former French Open finalist and has beaten the likes of Venus Williams at Flushing Meadows this year, but the Italian was completely out of sorts against a switched-on Wozniacki, who allowed Errani just one game for the entire match.

In the men’s tournament, the quarter-finals line-up was completed on Day 9, with Tomas Berdych and Marin Cilic setting up a rematch of their Wimbledon clash in contrasting fashion. Berdych was completely dominant against 20 year old Dominic Thiem, registering an emphatic straight sets win. Cilic, on the other hand, was forced to 5 sets to see off the challenge of Frenchman Gilles Simon.

Gael Monfils’ remarkable run in New York continued on Day 9, with the Frenchman still yet to drop a set for the tournament. Monfils upset seventh seed Grigor Dimitrov in a tight 3-setter, with the Frenchman converting 3 of his 4 break points for the match compared to Dimitrov claiming just one of his 7 break point opportunities.

Monfils will now play 5-time champion Roger Federer for a place in the semi-finals, after the Swiss superstar cruised past Spaniard Roberto Bautista Agut in straight sets. The win gave Federer an ATP Tour leading fifty-third victory of the season, and allowed the second seed to move into his tenth US Open quarter-final in 11 years.

The match-up sees the sixteenth seed play the seventeenth seed, but Azarenka is by far the more high-profile player, being a former world number one player and a two-time Grand Slam winner. That said, Makarova is an underrated player, having made the quarter-finals of multiple Grand Slams and having ousted Wimbledon finalist Eugenie Bouchard in the round of 16 in New York.

Makarova has won 2 of the 5 clashes between the pair, but Azarenka has won both of their meetings on hard-courts, the Belarusian’s preferred surface, and I think she has a clear advantage in raw power and shotmaking ability. That said, Azarenka is still getting back to full fitness after an injury-induced lay-off and may fade if this match goes deep into a deciding set. I’ll back Azarenka to get on top early as she seeks to get this match completed in straight sets. Azarenka in 2.

Any doubts over Kei Nishikori’s fitness were dispelled by his fantastic 5-set win over Milos Raonic in the fourth round. But that match, which finished at 2:26am local time, must have taken a lot out of the Japanese star. Wawrinka had a tough match against Robredo in round 4, but the third seed played only 4 sets and has had slightly more time to recover for this clash than his opponent.

The Swiss star has won both previous matches against Nishikori, and I think the key to today’s match is Wawrinka’s ability to execute when in an attacking position, compared with Nishikori’s ability to defend and, in particular, push Wawrinka deep and wide in the court. Wawrinka struck 75 winners against Robredo and a similar tally is likely to see him win this one. But if his unforced error count is high then Nishikori could well be the one going through to the semi-finals. Wawrinka in 5.

The match represents a clash of the oldest women left in the women’s draw and, no matter what she says in her press conferences, it’s clear that Serena Williams desperately wants to win this title and salvage something from a season that, in terms of majors at least, has been very disappointing.

Pennetta is a quality player who obviously enjoys playing in New York, having made the semi-finals at Flushing Meadows last year and having now returned to the second week of the tournament this year. I expect the Italian to come out swinging and give this match her all, but Williams’ advantage on serve is likely to be the key factor in this match. Williams in 2.

Top seed Djokovic has won 12 of 20 career meetings with Murray, but it was the Scot who triumphed here in the 2012 final, downing the Serb in 5 sets to claim his maiden Grand Slam title. However, Murray has found it difficult to compete with the very top players this season after returning from back surgery, with his win over Tsonga on Monday representing his first win over a top 10 player since Wimbledon last year.

Djokovic beat Murray in straight sets in Miami earlier this season – the only time this year that the pair has played one another – and I think the world number one, who has made the last 4 US Open finals, will be too strong in this contest. Look for Djokovic to pace himself through the match, knowing he has the superior fitness at this point in time. Djokovic in 4.