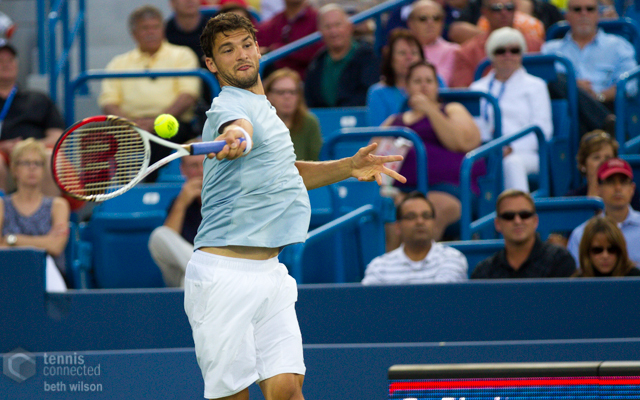 It was another humid and windy day in New York, but the muggy conditions didn’t bother Novak Djokovic or Andy Murray, who set up a quarter-final clash with straight sets victories on Day 8.

Since losing to Philipp Kohlschreiber in the third round of the 2009 French Open, Novak Djokovic had made 21 consecutive Grand Slam quarter-finals, and on Day 8 the Serb made it 22 major quarter-finals in a row, saving a set point in the second set en route to a 3 set victory over the German.

Andy Murray booked his place in the last 8 by recording his first win over a top 10 player since winning Wimbledon last year, the Scot overcoming Frenchman Jo-Wilfried Tsonga in a tight 3-setter. Australian Open winner Stan Wawrinka blasted 75 winners on his way to a 4 set win over Tommy Robredo, overcoming a tumble into spectators in the third set, some cramps and some generally anxious moments against the veteran Spaniard to advance to the quarter-finals.

In the women’s tournament, Italian eleventh seed Flavia Pennetta overcame Casey Dellacqua, claiming a tight first set before pulling away in the second set. Top seed Serena Williams stopped the run of giant-killer Kaia Kanepi to set up a meeting with Pennetta, which will see the 2 oldest players in the women’s draw go head to head.

Two-time US Open finalist Victoria Azarenka was forced to fight all the way to see off the challenge of Serbian qualifier Aleksandra Krunic, the former world number one forced to come from a set down to register a victory over the world number 145.

Azarenka will play Russian Ekaterina Makarova for a place in the semi-finals after Makarova ended Eugenie Bouchard’s 2014 streak of making the semi-finals or better at each Grand Slam. Bouchard was visibly distressed in the humid conditions, having her blood pressure checked and putting ice on her neck and shoulders in an attempt to cool down. It was to no avail however, as the seventeenth seeded Makarova recorded a 7-6(2) 6-4 win.

17 year old Belinda Bencic is undoubtedly a player of the future, but I’ve been amazed at how well the Swiss player has been able to transition to the WTA Tour this season. Bencic has shown maturity and composure beyond her years and has been tactically very sharp to boot.

The powerful Peng, who hits double-handed forehands and backhands, has had a brilliant tournament to date, upsetting the likes of Radwanska and Vinci en route to the quarter-finals. Peng has greater experience, but if Bencic can move Peng around the court and expose her lack of reach out wide, then I think the teenager can continue her fairytale run. Bencic in 3.

If you are a fan of tennis, then it’s hard not to be excited about this match-up. Dimitrov has a textbook game, with a classical one-handed backhand and compact swings which have drawn comparisons with Roger Federer. Monfils, on the other hand, is flamboyant and electrifying, capable of utilising his incredible athleticism to hit a range of shots that are most definitely not from the textbook.

Monfils is usually very erratic, but the Frenchman has been impressively consistent to date in New York this year, not dropping a set so far and dismissing compatriot Richard Gasquet in style in round 3. Monfils beat Dimitrov at the 2011 US Open, but was forced to retire in Bucharest earlier this year when trailing the Bulgarian. Dimitrov has had the more consistent season, and I’ll back him for this reason, but you simply never know what Monfils will bring to the court. Dimitrov in 4.

When you think of Spanish tennis players, names such as Nadal and Ferrer instantly come to mind, along with veterans such as Robredo and Lopez. However, Roberto Bautista Agut is an emerging player on the ATP Tour and another Spaniard who may continue the country’s proud tennis traditions in the years to come.

The lanky Spaniard has a powerful game and showed by knocking Del Potro out of the Australian Open in January that he can mix it with the best. This will be his first match against Roger Federer and I think he will put up a good fight against the 17-time major winner. That said, Federer looks in top shape right now and I can’t see him dropping this one. Federer in 4.

Since Wimbledon, Caroline Wozniacki has given various indications that she is getting back to somewhere near her best, which of course saw her sit atop the world rankings for 67 weeks. The Dane scored one of her best wins in the last few years by beating Maria Sharapova in the previous round and her training for the New York Marathon appears to have provided her with plenty of stamina.

Errani is a similar player to Wozniacki, covering the court well and counterpunching effectively, but I think the Italian’s weak serve is where Wozniacki will really attack today. Look for the Dane to jump all over the Errani second serve and race to a relatively comfortable straight sets victory. Wozniacki in 2.

Tomas Berdych has had success in New York before, having made it through to the semi-finals of the 2012 US Open, defeating Roger Federer before losing to eventual champion Andy Murray on a very windy day at Flushing Meadows. Berdych has fallen away a bit after a strong start to the 2014 season, but I think the courts in New York suit his game to a tee.

Thiem is a rising star on the ATP Tour and showed great composure and stamina to upset good friend Ernests Gulbis in round 2. However, at this stage I don’t think the young Austrian has the raw power to match Berdych in this clash. I’ll take the Czech in a close one. Berdych in 5.