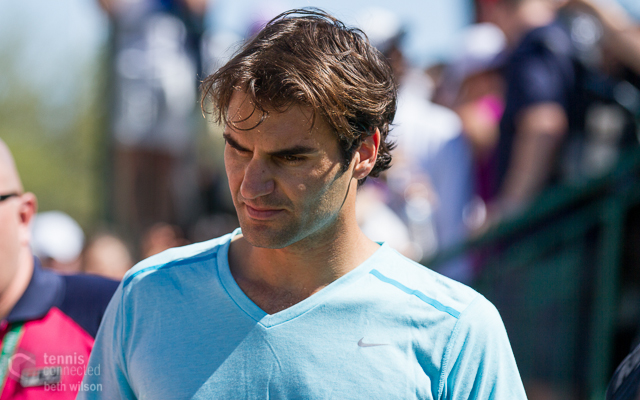 Although he had not looked at all convincing at some stages of the tournament. Novak Djokovic dug deep from within to pull off a five set victory over seven-time champion Roger Federer.

Denying the Swiss an unprecedented eighth title took some doing though – from the start of the match the level of play was extremely high, with 21 shot rallies and neither player giving an inch up to a first set tie-break.

For much of the match Federer had looked slightly the more solid, no more so than in the tie-break as he forged ahead, making it the Serbian work hard to get back on terms, before just closing out a the first set.

Djokovic continued to slip and slide, taking some nasty tumbles, first on the dirt and then on the lusher areas of the grass, but managed to nudge ahead a break and keep hold of the advantage to level the match. Although the set went to him, it looked as though Federer was turning the tide again.

Going toe-to-toe again there was no discernible dip in their level as they went game for game into another tie-break, but this time Djokovic was able to build up a head of steam with many feeling that this would now be a foregone conclusion.

In fact when the Serbian took an early break and lead up to 5-2 with a Championship point, it looked as through the script was written, that was until Federer fought his way right back to win five games on the trot to take the match into a decider.

Both men took the time to take a short break and yet again there was no dip in the level of play, although Djokovic called for the trainer early. With a pro-Federer crowd cheering everything raucously, they were getting their money’s worth, and the match now became a staring down game. For a time the Serbian looked dead on his feet, and Federer out hammering down aces and at times looked the sharper.

But the danger of serving second in the set came up to bite Federer who was not able to capitalise on a break point to take the lead, and Djokovic earned his second match point as the Swiss was serving to stay in the Championship at 4-5. This time, he did not miss – as a netted backhand from Federer handed Djokovic another Wimbledon title.

There is a lot for Federer to be pleased with, but the truth is this was his best chance for that elusive right-title record and an 18th Grand Slam title. But he surely can carry on his current spell of resurgence.

“I thought the match was a good one,” he said. “I thought it had everything for fans to like, I think. The swing of momentum in the first set, him coming back in the second, staying even in the third, all the back and forth in the fourth set, and then the drama of the fifth.

“From that standpoint, I thought it was an interesting match. The level I thought was good. I don’t feel I necessarily played my absolute very best because I couldn’t break for over three sets. For me that was disappointing.

“But I thought Novak played well in those areas and on his serve and make sure that he didn’t have any letdowns there.”

Interestingly for Djokovic he felt that this was perhaps the best of his seven titles. It was an emotional acceptance speech, where he dedicated the trophy to his first coach Jelena Gencic, who passed away last year during Roland Garros. Djokovic had not won a Slam final since the beginning of last year.

After the match he said: “Most special Grand Slam final I’ve played. At the time of my career for this Grand Slam trophy to arrive is crucial, especially, as I said, after losing several Grand Slam finals in a row. Started doubting of course a little bit. I needed this win a lot.