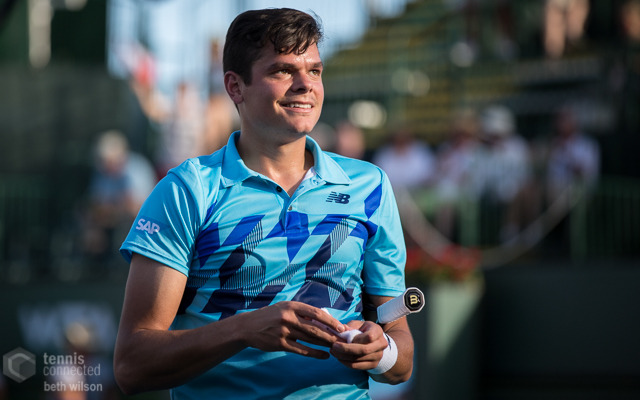 Petra Kvitova and Eugenie Bouchard will contest Saturday’s ladies’ final after overcoming Lucie Safarova and Simona Halep in their respective semi-finals on Day 10.

The men’s finalists will be decided on Day 11, with Novak Djokovic locking horns with Grigor Dimitrov and Roger Federer taking on Milos Raonic in what promises to be a bumper day of tennis.

In the all-Czech first semi-final, Lucie Safarova exhibited some early nerves in what was her debut Grand Slam semi-final, dropping serve in the opening game of the match to former Wimbledon champion Petra Kvitova. But Safarova soon gathered herself, breaking back 3 games later. The first set was a tight affair, Kvitova taking 51 minutes to finally edge her compatriot in a tiebreaker, 8 points to 6.

The loss of the first set seemed to deflate Safarova and inspire Kvitova, the 2011 champion breaking in the second and sixth games of the second set and sending down 8 aces en route to a 7-6(6) 6-1 victory in 80 minutes.

The trajectory of the second semi-final was eerily similar to that of the first semi-final, with Simona Halep and Eugenie Bouchard neck-and-neck throughout the first set, despite the Romanian badly turning her left ankle early in the set. The third seed soldiered on bravely and opened up a 4-2 lead in the tiebreaker, only for Bouchard to come roaring back, taking 5 of the next 6 points to claim the set 7 points to 5.

As was the case with Safarova, losing a tight first set put Halep on the back foot in the second set, with the young Canadian racing out to a 4-1 lead. After losing semi-finals in the year’s first 2 Grand Slams, it was a case of third time lucky for Bouchard, who overcame some nerves in the latter stages of the match to seal a 7-6(5) 6-2 win on her sixth match point.

Grigor Dimitrov comes into this match riding a 10-match winning streak on grass and must be full of confidence after making the defending champion, Scot Andy Murray, look positively second-rate in their quarter-final. With Roger Rasheed upping the Bulgarian’s work-rate and developing his confidence, self-belief and tactical awareness, the sky is the limit for the eleventh seed.

Djokovic wasn’t at his best against an on-song Marin Cilic in his quarter-final, but the Serb underlined just how hard it is to beat him in a Grand Slam contest, coming from 2 sets to 1 down to hammer Cilic 6-2 6-2 in the fourth and fifth sets. Dimitrov has beaten Djokovic before, on clay in Madrid last year, but each of their other 3 encounters has seen Djokovic walk away a straight sets victor.

If Dimitrov is to prevail, he will need to employ a similar game plan to the one he adopted against Murray – serving well, being aggressive and attacking the net to finish the point whenever possible. Djokovic is fitter and better defensively than the Bulgarian, so Dimitrov’s only option is to attack the Serb and seek to overpower him. I can see Dimitrov doing this for a set and a half, but I expect Djokovic to be a much tougher opponent for Dimitrov than Murray was in the quarter-finals. Djokovic in 4.

Going into this tournament, it was a complete mystery to me that Milos Raonic had never ventured beyond the second round at the All England Club. The big Canadian with the ballistic serve should be one of the title favourites in any grass-court tournament that he enters, yet prior to this year he had woefully underperformed in the biggest grass-court tournament in the world.

But I have been mightily impressed with the eighth seed’s efforts in this tournament, especially in the quarter-finals against Kyrgios, when all the pressure was on Raonic and he had the first set practically stolen off him by the teenager. Coach Ivan Ljubicic has had a steadying influence on the Canadian, and I think his season in 2014 will set the foundation for a very strong next few years on the ATP Tour.

Federer has of course done it all before at Wimbledon, winning the tournament on 7 occasions. After last year’s back problems, the Swiss superstar is back fit and healthy and, with Murray and Nadal out of the tournament, must sense that this is a golden opportunity to add another title to his bulging trophy cabinet and further cement his legacy.

Federer has a commanding 4-0 career advantage over Raonic and, whilst I expect the Canadian to push the fourth seed all the way in this contest, I think Federer will be too sharp in the key moments. Just as Federer used to defuse Roddick’s giant serve at Wimbledon, so he will find a way to undermine Raonic’s huge serving advantage and notch up another semi-final win in SW19. Federer in 5.