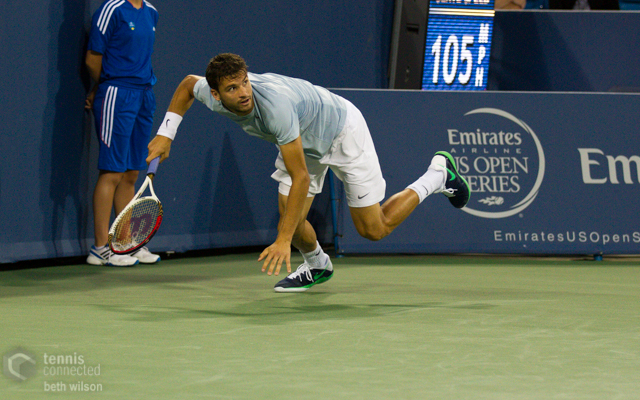 Nick Kyrgios’ fairytale run at Wimbledon continued on Day 8, with the young Aussie producing one of the most sensational upsets in recent history with a stunning 4 set win over world number one Rafael Nadal.

From the very first game of the match, in which he blasted aces off both first and second serves, Kyrgios showed that he would not be daunted by Nadal’s reputation and that he would be ultra-aggressive at every opportunity. With Nadal unable to get a good read on Kyrgios’ serve, the world number 144 racked up 37 aces and a total of 70 winners, overpowering the Spanish superstar to claim the biggest win of his career and move through to the quarter-finals of the tournament.

Kyrgios will face Milos Raonic for a spot in the semi-finals after the Canadian star overcame Japan’s Kei Nishikori in 4 sets. Day 9 will also pit Swiss stars Roger Federer and Stanislas Wawrinka against one another after they recorded straight sets wins over Tommy Robredo and Feliciano Lopez respectively on Day 8.

In the women’s tournament, French Open champion Maria Sharapova was a surprise loser on Day 8, the Russian going down to German ninth seed Angelique Kerber in a hard-fought 3-setter. Meanwhile, the Czech Republic is guaranteed of a finalist in the women’s tournament after former champion Petra Kvitova moved through to the semi-finals by beating countrywoman Barbora Zahlavova Strycova in straight sets and another Czech, twenty-third seed Lucie Safarova, defeated Russian Ekaterina Makarova 6-3 6-1 to set up a semi-final showdown with Kvitova.

Defending champion Andy Murray has had a sluggish start to the season by his lofty standards, struggling to re-adapt to the pace of the ATP Tour after back surgery late last year, but the third seed seems to have hit his straps now, not dropping a set en route to the quarter-finals. The Scot is serving and returning particularly well, and is full of confidence at the All England Club, having won the Olympic gold medal here in 2012 as well as last year’s Wimbledon crown.

It’s just as well for Murray fans that their man is in top form, as he faces a stern test against Bulgarian Grigor Dimitrov on Day 9. Under the watchful eye of coach Roger Rasheed, Dimitrov has translated his undoubted potential into consistent match-winning performances, claiming tournament wins on a variety of surfaces. Dimitrov beat Murray earlier this year on clay in Mexico, but the Scot leads 3-1 in career meetings. On grass, I think Murray will be too strong, but this should be a superb contest. Murray in 4.

Kerber, a semi-finalist at the All-England Club in 2012, showed tremendous tenacity in overcoming Maria Sharapova in 3 sets on Day 8, but I fear that the German will have a hard time backing up from that match on Day 9. That contest against the ever-intense Sharapova would have taken a lot out of the ninth seed, both mentally and physically, and I sense Kerber will have something of a let-down in her encounter with Bouchard.

The young Canadian has showed incredible poise and maturity in the Grand Slams so far this year, making the semi-finals in Melbourne and Paris, and I think that Bouchard has the self-belief and the ability to reach the top tier of players in the women’s game and vie for Grand Slam titles and the world number one ranking. I’ll back Bouchard to earn a hard-fought 3 set win, with her extra day of rest becoming crucial in the deciding set. Bouchard in 3.

As compatriots, Davis Cup teammates, friends and Olympic doubles gold medalists, Stan Wawrinka and Roger Federer are very close. However, their friendship will be put to one side on Day 9 as they vie for a spot in the semi-finals. With Nadal exiting the tournament on Day 8, both players will know that the winner of their match has a golden opportunity to progress to Sunday’s final, and that will give them added incentive going into this match.

Wawrinka has only beaten Federer twice in 9 years, but one of those wins came earlier this year in the final in Monte Carlo, when Wawrinka came from a set down to overpower his compatriot. That win will give the fifth seed some confidence going into this clash, but Federer is at his best on grass and treats the All England Club as a second home. The fourth seed was clinical against Robredo and I think the grass-court surface gives him the decisive edge in this one. Federer in 4.

It’s probably time to stop make any predictions about young Nick Kyrgios, who has swept all before him in his incredible run to the quarter-finals, including second seed Rafael Nadal, but where’s the fun in that? The 19 year old with the booming serve and big forehand has plenty of momentum but surely his physical and emotional exertions must take their toll eventually.

Raonic bounced back strongly after dropping the first set against Nishikori, and the Canadian has far more big match experience than his opponent. That said, Kyrgios hasn’t looked at all daunted in his matches to date, whilst Raonic does have a tendency to tighten up in big matches. I think Raonic should be too good in this one, but Kyrgios is riding a tidal wave at present and so another upset victory cannot be ruled out. Raonic in 5.

With former Wimbledon winner Goran Ivanisevic guiding him, Marin Cilic has moved through to the quarter-finals with a minimum of fuss, upsetting the likes of Tomas Berdych en route to the final 8. Djokovic holds a commanding 9-0 head-to-head advantage over the Croatian, but the pair has never played one another on grass, a surface on which Cilic has performed well in the past, winning the Queen’s Club event in 2012 and making the final there a year later.

Cilic moves very well for a big guy and, when he is serving well, can be very hard to stop. Djokovic is of course the best mover on the ATP Tour and he will make Cilic hit more balls and closer to the lines than the Croat is used to. Cilic has pinched a set from Djokovic in their last 2 meetings and I expect the Croat to do the same again, but ultimately Djokovic will prevail and move through to the semi-finals. Djokovic in 4.