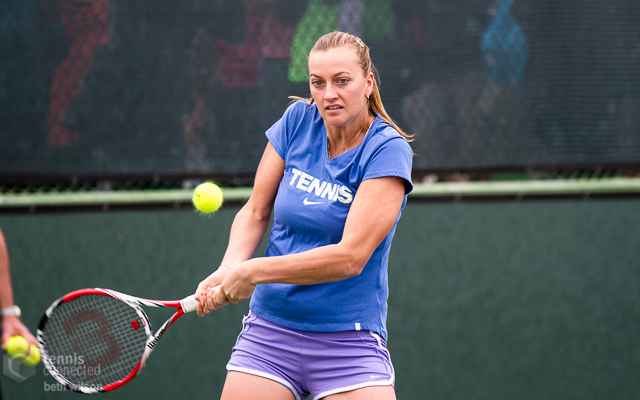 It’s ladies’ semi-finals day on Day 10 at the All England Club, with former Wimbledon champion Petra Kvitova the only player out of the 4 semi-finalists to have previously tasted Grand Slam success.

Third seed Simona Halep booked her place in the final 4 of the tournament with a fine win over last year’s finalist, German Sabine Lisicki, taking the match 6-4 6-0 in 57 minutes. The Romanian was in superb touch on serve, winning 80 percent of her first service points, and was efficient with her opportunities on Lisicki’s serve, converting 5 of 8 break points, whilst Lisicki couldn’t find her range, committing a total of 20 unforced errors. Halep will face Eugenie Bouchard for a place in Saturday’s final, after the Canadian overcame Maria Sharapova’s conqueror, Angelique Kerber, 6-3 6-4 in just over an hour.

In the men’s tournament, defending champion Andy Murray was sensationally dumped out of the tournament by rising star Grigor Dimitrov, the Bulgarian taking advantage of a sub-par performance by Murray to notch a 6-1 7-6(4) 6-2 victory. While Murray was off his game, Dimitrov was in red-hot touch, hitting 32 winners against just 10 unforced errors, and winning 20 of 22 forays to the net.

Dimitrov will play top seed Novak Djokovic in Friday’s semi-finals after the Serb squeezed past Marin Cilic in 5 sets. Things looked precarious for Djokovic when Cilic took the third set in a tiebreaker to establish a 2 sets to 1 lead, but the world number 2 dug deep and swept past Cilic 6-2 in the deciding set, claiming the win in 3 hours and 19 minutes.

In the bottom half of the men’s draw, 7-time champion Roger Federer outclassed countryman Stan Wawrinka, coming from a set down to take the second set in a tiebreaker and then the match in 4 sets. Wawrinka seemed fatigued after a series of back-to-back matches and also appeared to be suffering from illness, but battled manfully against his close friend before succumbing in 2 hours and 33 minutes.

Federer will face Canadian Milos Raonic for a spot in the final, after the Canadian made it through to his first ever Grand Slam semi-final by ending the dream run of Aussie teenager Nick Kyrgios. The wildcard stole the first set in a tiebreaker, but a dominant serving display by the eighth seeded Raonic, along with some inconsistent play from Kyrgios at critical moments, enabled the Canadian to secure a 4 set victory.

The all-Czech semi-final pits former Wimbledon champion and sixth seed Petra Kvitova against the tenacious veteran Lucie Safarova. Whilst Kvitova has a game made for grass-court tennis, with a powerful swinging serve and lethal forehand, Safarova is more of a pugnacious counterpuncher who is willing to scrap for every point on any surface. The twenty-third seeded Safarova has done tremendously well to make it through to her first ever Grand Slam semi-final, but I think Kvitova’s superior class will shine through in this clash.

Kvitova has won all 5 of the pair’s previous meetings, although the most recent match in Eastbourne on grass went to a tiebreaker in the deciding set. Kvitova’s experience at this stage of the tournament will be of enormous assistance in the critical moments of this match, and I think she will record a relatively easy victory over Safarova. Kvitova in 2.

This should be an intriguing and very close contest between two of the rising stars on the WTA Tour. In fact, even calling them rising stars could be considered as underselling them, given that Halep is a French Open finalist and the third seed, and Bouchard is the only player on the WTA Tour to make the semi-finals of both the Australian and French Opens this year. In any event, there’s no doubt that these two will be vying for major titles for many years to come.

Halep is the higher-ranked player, and beat Bouchard in the pair’s only previous meeting, a tough 3-setter at Indian Wells earlier this year, but Bouchard was the 2012 junior champion at the All England Club and is an assured grass-court player. I think this will be a much tighter affair than the first semi-final, with little separating the pair. Halep is probably the more tactically astute, with Bouchard the bigger hitter. After losing out in the semi-finals in Melbourne and Paris, Bouchard will be desperate to advance one stage further, and I think sheer determination will propel her to a narrow victory. Bouchard in 3.