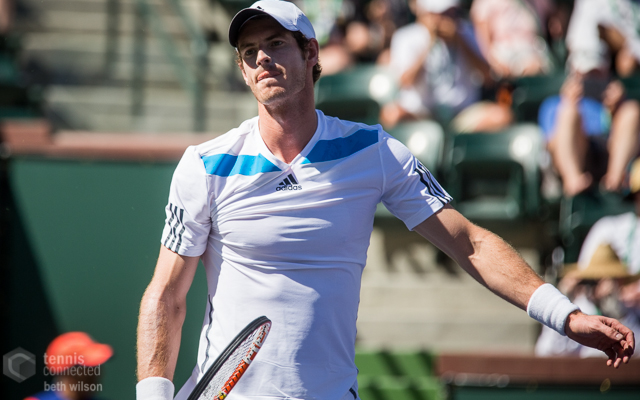 In front of the Duke and Duchess of Kent, defending champion Andy Murray joined this year’s long line of former champions who exited SW19, when he lost in straight sets to Grigor Dimitrov.

From the very start of the match, Dimitrov was sharp whereas Murray looked to have his timing a little off, and with a player with Dimitrov’s momentum, that is a dangerous place to be.

Dimitrov raced through the first set in just 25 minutes leaving everyone, including Murray stunned. The Brit had his chances in the second set as they went to a to a tie-break, but nothing seemed to work for the champion,

Typically, for Murray, he came straight into press – sometimes a blessing, but also a curse as players have very little time to reflect on the match just gone.

“My start to the match was poor. I started the match badly. And I think that gave him confidence.

“I should have done a better job at the beginning of the match of making it tougher for him, and I didn’t manage to do that. Also, when I got back into the second set, that was my opportunity there. He’d been up in the set a break and I’d come back. Momentum was starting to shift a little bit. Couldn’t quite do it.”

For Dimitrov though, it has been a remarkable progression. From the nickname of “Baby Fed” that he now thankfully has shaken off, to four titles, three of which came this year all on different surfaces, this is a changed young man from the one cramping at the end of best-of-five set matches.

“I was pretty steady during the whole match and came out the winner. I have two more matches to play hopefully. I’m trying to stay on course and prepare for the next one.”

Dimitrov faces last year’s finalist Novak Djokovic in the semi-final. Djokovic dropped his second set of the championships against Marin Cilic, but came back to win in four sets.

He said: “I played a very bad game, with a couple of bad errors in the second set and the momentum changed for him to get back into the match,” Djokovic told BBC television straight after the match. “He found his rhythm on serve, but I allowed him to step in. It was frustrating for me.

“You’re fighting on the court as much as your opponent, and you try to just mentally be strong and find that inner strength that can help you in those particular moments,” he added. “That’s what helped me.”

At the other side of the draw Stan Wawrinka got off to a great start against compatriot, taking the first set, but he seemed to struggle with his fitness and health and after losing the second set tie-break, Wawrinka faded badly, sending Federer to the semi-final with the aim of adding one of those little trophy emblems onto his pristine shoes.

So bring up the rear in the day’s matches was “wunderkind” Nick Kyrgios against Milos Raonic. For a time it looked as though the youngster was going to do it again, staying toe-to-toe with Raonic and taking the first set on a tie-break, but frustrations and perhaps a little fatigue started seeping into the Aussie’s game.

And not unexpectedly so – this young man came from two sets down to beat Richard Gasquet, and had the adrenaline rush to knock Rafael Nadal off his perch. Raonic stayed steady and makes his first Grand Slam semi-final and that serve of his could give Roger Federer problems.

The men’s semi-finals are scheduled for Friday.

Meanwhile the women’s line up for Thursday was decided in dramatic fashion in one instance. Simona Halep went head to head with last year’s finalist Sabine Lisicki and it looked as though the German was going to advance – after heading ahead 4-2. Halep won 10 games on the bounce to end Lisicki’s path to the final.

Angelique Kerber felt the effects of playing back to back, while her opponent had the benefit of a day’s rest. Eugenie Bouchard did everything sharper and more consistently against the German, who won an epic battle with Maria Sharapova in the previous round. Kerber admitted she struggled with the quick turnaround, but here’s the thing. Bouchard plays back to back for the first time, and faces Halep.

Only one champion remains in the women’s draw as Czech teammates Lucie Safarova and Petra Kvitova take each other on. Kvitova leads the head to head but Safarova has always been a dangerous name on the other side of the net – and makes her first Grand Slam semi-final – will it be enough momentum to take her all the way?

The women’s semi-finals are on Thursday.