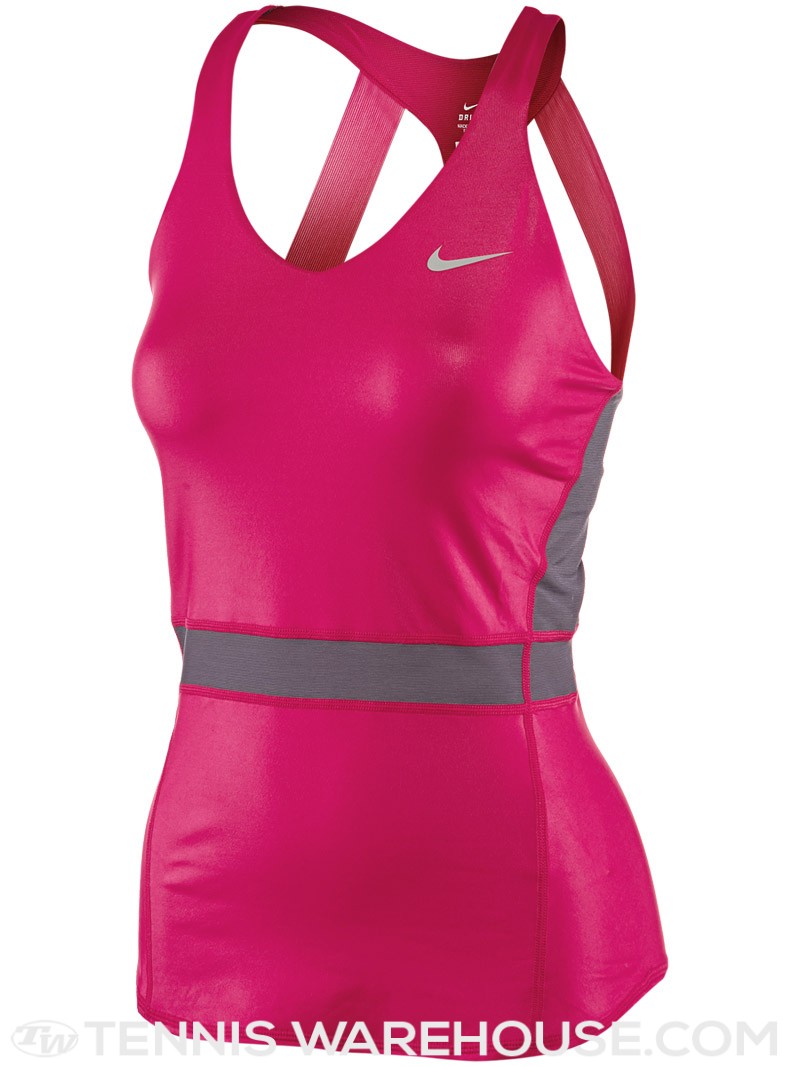 While the heat of the hard-courts continues to rise on North American soil, there’s no better time to get outfitted in the freshest Nike Tennis apparel and footwear from your favorite stars on the WTA. Led by Serena Williams, Maria Sharapova, Victoria Azarenka and Eugenie Bouchard, the latest Fall 2014 Group features vibrant new colors and patterns to satisfy any player.

Starting off with Serena’s outfit for Montreal and Cincinnati, the American legend will don the Fall Pure SS Top, which will be paired with the Fall Four Pleat Knit Skort. Both functional pieces provide great support and breathability under hot and humid conditions.

Moving onto the trend-setting style of Sharapova, the reigning French Open winner is scheduled to debut the Fall Premier Maria Tank in fuchsia force with dark raisin and matte silver (shown to the right), which will be complemented by the Fall Premier Maria Skort in dark raisin with university blue and matte silver. Sharapova’s shoe for the summer hard-court season will be the Vapor 9.5 Tour in hyper pink, ivory, fuhsia and dark magnet grey.

Working her way back on Tour after a series of injuries, Azarenka continues to prove that she’s one of the hardest workers on Tour. Slated to wear the Fall Premier Sleeveless Polo in fuchsia force with magnet grey and light magnet grey, Vika will complete her outfit with the stylish Fall Printed Woven Short in fuchsia force with matte silver. Azarenka’s footwork will continue to soar this summer in the ivory, hyper pink, magnet grey and fuchsia colorway of the Lunar Ballistec.

Dazzling the hearts of her fans around the world with her brilliant play this year, Bouchard’s presence in Montreal will be something to see. Preparing for what she hopes is a fourth successive major in New York, Eugenie’s attire this summer will be led by the Fall Advantage Solid Tank in fuchsia force, which will be paired with the Fall Victory Printed Pleat Skort in dark magnet grey with fuchsia force and magnet grey. The Canadian’s footwear will continue to be the Vapor 9.5 Tour, but will receive a hyper pink, ivory, fuhsia and dark magnet grey color update.

Other Nike stars such as Li Na, Petra Kvitova, Sara Errani Sabine Lisicki and Lucie Safarova will also be wearing the newest in Nike apparel and footwear from the Fall 2014 collection.