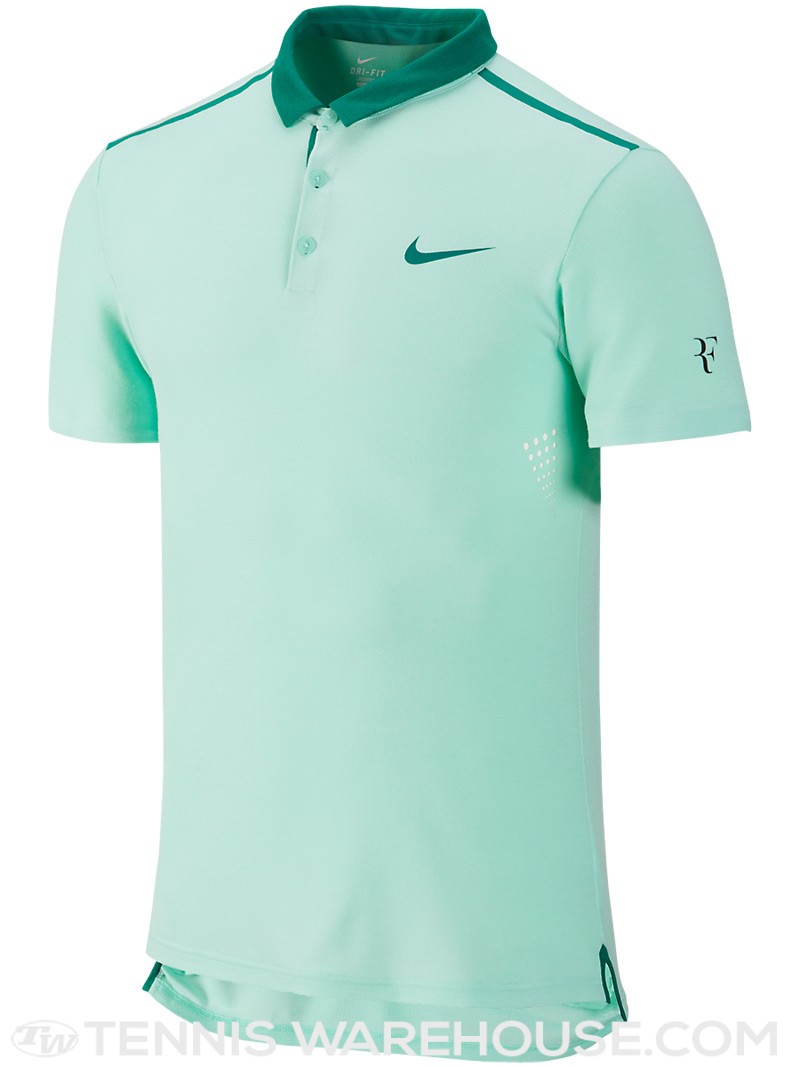 Ready to rock on the hard-courts courts of North America, the Nike Tennis team of Rafael Nadal, Roger Federer and Grigor Dimitrov are all eager to debut their latest clothing and footwear lines beginning at the Rogers Cup in Toronto. Stepping it up with great new colors like medium mint, mystic green, rift blue and light magenta, a competitive summer of tennis will be highlighted by this latest collection.

Aiming to hoist some serious hard-court hardware once again, Federer’s class will be personified once again as he debuts the Fall Advantage Premier Polo (pictured to the right) in medium mint with mystic green and black, which will complimented with the Fall Premier Gladiator Short in rift blue with medium mint. (Receiving this kit for review prior to release, we can recommend going up a size in the polo as it fits tight, while the shorts fit true to size). Mixing up his warm-up jacket this time around, Federer will look sharp in his Fall RF Premier Full Zip Hoodie in space blue with cannon and ivory, while the latest colorway of his  Vapor 9.5 Tour will be featured in magnet grey, medium mint, black and space blue.

Reaching new heights in both popularity and results in 2014, Dimitrov’s on-court style continues to impress his ever-growing fan-base. Slated to sport the Fall Rally Sphere Stripe Crew in hyper jade with hyper cobalt and cool blue, Grigor’s look will be completed with the Fall Freestyle Short in white with light magnet grey and black. Dimitrov’s warm-up for the summer hard-court season will be the Fall LS French Terry Crew in black with white and his shoe of choice on the asphalt will be the Vapor 9.5 Tour in magnet grey, medium mint, black and space blue.

Nick Kyrgios, Bernard Tomic, Ryan Harrison and the rest of the Nike Sponsored tennis pros will also be outfitted in the latest apparel and footwear from the 2014 Fall Tennis collection.