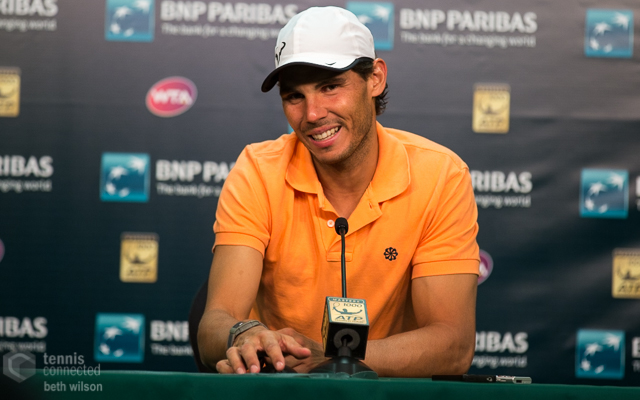 The biggest shock of the day was late in the dying sun, as talented Aussie teen Nick Kyrgios put out the World No. 1 and second seed Rafael Nadal in a four-set battle.

Kyrgios has impressed many with his work ethic and his attitude – even Richard Gasquet praised that aspect after blowing a two set lead over him.

The first set was always going to be close – because that’s the kind of guy Kyrgios is – as he pushed the two-time Wimbledon champion to a tie-break. And impressively he stayed with Nadal all the away until Nadal was able to edge a break to level the match.

Perhaps he would dip at this point – after all to go toe to toe with one of the most brutal players of the game would really be enough, but the teenager stayed with Nadal to force another tie-break and it was not as if Nadal played badly – he was yanked firmly from his comfort zone as Kyrgios kept up the relentless pressure, to force a third set tie-break. This time the nerves that had been evident in his first gave way to a sense of confidence as he advanced to a two set lead.

Unbelievably the Australian got the early break and shot out to a 4-1 lead, eventually closing out the match with audacious ace to deliver the biggest upset of the tournament so far – 7-6(5) 5-7 7-6(5) 6-3.

Made to wait an extra day to play thanks for ever more rain, Maria Sharapova was the first of this year’s French Open champions to leave the tournament. With the absence of Serena, this was a great chance for her to reclaim the title on the ten year anniversary of her breakthrough win, but Angelique Kerber had other ideas.

Sharapova had been in great form, hardly pushed at all and not dropping a set, but Kerber’s very consistency is her great danger, and making a play for a Grand Slam semi-final was nothing new for her.

With the pair splitting the first two sets, it was Kerber that started the brighter in the deciding set, building up a 3-0 lead, but Sharapova has showed that she is nothing if not tenacious in her fight-backs with Sharapova breaking as Kerber served for the match the first time.

She had to fight off five match points just to stay in the match in the next game but it was lucky match point number seven got the German as she headed into another Grand Slam semi-final 7-6(4) 4-6 6-4.

Speaking immediately after her match to the BBC, Kerber said: “It was such a tough match. We were playing on a really high level, and it was so close – every single set was so close. I’m just happy I won the match – Maria is a great player and plays so well on grass, so this is really just unbelievable.

“When I had the three match points at 0-40 I was just trying to focus on myself, play my game and stay aggressive. In the end it worked, and I’m happy I won this battle and am in the quarterfinals now.

“I enjoyed playing on Centre Court. I think the fans enjoyed it too. It was an amazing atmosphere.”

Sharapova was suitably pragmatic in her press conference, knowing that she had come in with as the favourite: “It happens. That’s the game. Just because you come in as a favorite, doesn’t mean you’re guaranteed to hold the trophy. That’s why we play this sport. You start from the first round. As many people anticipate certain matches, people going through, the favorites – at the end of the day those are just words. We as players have to go out and play. And that’s the way some of the results have turned out.”