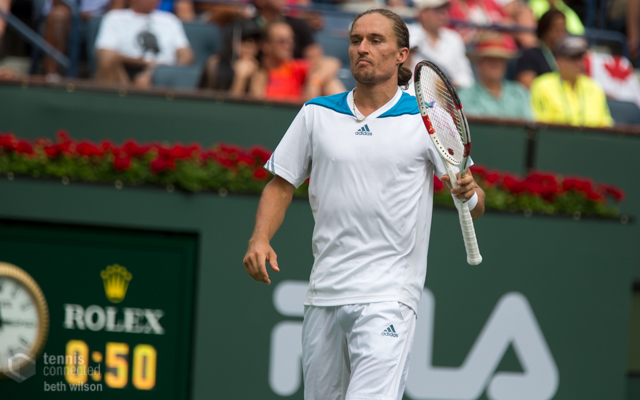 Aussie youngster Nick Kyrgios was the toast of London on Day 4 after saving an incredible 9 match points before ousting thirteenth seed Richard Gasquet in a pulsating 5-setter.

After dropping the first 2 sets, Kyrgios relied on his booming serve to first level the match at 2 sets apiece and to then get out of jail on numerous occasions, eventually stealing the win over Gasquet 10-8 in the decider. Kyrgios next faces another rising star, Czech Jiri Vesely, who outlasted Gael Monfils in another 5-setter.

Rafael Nadal gained revenge over Lukas Rosol for his 2012 upset at the hands of the Czech, but not before surviving a few anxious moments. Nadal was down a set and a break before edging Rosol in a second set tiebreaker and going on to claim a satisfying 4 set win.

Among the other big names on the men’s side, there were wins for Wawrinka, Nishikori, Raonic and Isner, whilst German seed Philipp Kohlschreiber was upset by Italian veteran Simone Bollelli, a lucky loser from the qualifying event.

On the women’s side, Serena Williams and Maria Sharapova breezed through to the third round, dropping just 5 games between them. German duo Petkovic and Kerber were each forced to 3 sets but ultimately prevailed, as Ana Ivanovic and Eugenie Bouchard also progressed to the round of 32.

Carla Suarez Navarro, more at home on clay, exited the tournament on Day 4, but there was no such trouble for former finalists Vera Zvonareva and Sabine Lisicki, both of whom recorded straight sets wins.

Djokovic got a little bit tight in the last couple of sets against Stepanek and I imagine the Serb will want to bounce back with an emphatic display against Gilles Simon on Day 5. The Frenchman has lost his past 6 matches against Djokovic, with Simon’s lone win over the top seed coming back in 2008.

Simon isn’t at his strongest on grass, with the slightly built Frenchman liable to get blown off the court by some of the more powerful players on the men’s circuit. Djokovic doesn’t fit that mould, but the top seed’s rock-solid all court game should prove too much for Simon to handle. Djokovic in 3.

After overcoming one tricky opponent in the form of Bernard Tomic, sixth seed Tomas Berdych faces another danger match against twenty-sixth seed Marin Cilic. The Croatian has shown a fondness for the grass in the past few years, generating some very good results at the Queen’s Club event, and with former Wimbledon winner Goran Ivanisevic in his camp, Cilic will fancy his chances of an upset in this match.

Cilic trails Berdych in head-to-head matches, having lost 5 of their 7 clashes to date, but the Croatian did upset the Czech on grass at the Queen’s Club event last year. I think this one will go the distance, with Berdych’s superior ball-striking ability giving him a slight edge down the stretch. Berdych in 5.

After completely annihilating his last opponent, Blaz Rola, for the loss of just two games, there’s no doubt that Andy Murray will be in for a far tougher match against the twenty-seventh seeded Bautista Agut. The Spaniard is a rising star on the ATP Tour and, as Murray noted, his flat groundstrokes make his game much better suited to grass-court tennis that the heavy top-spin game employed by so many of his countrymen.

These two have never played one another, and so I expect it will take a set or two for each player to feel out the other. Look for a tight couple of sets initially before Murray pulls away and uses his greater grass-court experience to cement the victory. Murray in 4.

Venus Williams might be a 5-time Wimbledon champion, but the reality is that the American, now in her seventeenth Wimbledon campaign, is past her best. Williams is still capable of beating most players on the WTA Tour, as she showed by winning in Dubai earlier this year, but Kvitova is in the very top tier of performers on the women’s tour.

Like Williams, Kvitova is also a former Wimbledon champion and holds an imposing 3-1 career advantage over Williams, including a win in Doha earlier this year. I’ll back the Czech to come out on top in this encounter. Kvitova in 3.

Grigor Dimitrov looks increasingly at ease on the grass-courts of the All England Club, and I think the young Bulgarian will have too much power, particularly on serve, for his opponent today. Dolgopolov is a tricky player to face, darting around the court and utilising his whippy groundstrokes and serve to maximum effect.

The Ukrainian is at his best on fast services, and so can be a tough opponent on grass, but Dimitrov has had plenty of match practice on the surface in the past few weeks in London and I expect him to prevail in a tight 4-setter. Dimitrov in 4.

Put your house on: Caroline Wozniacki, the former world number one, to blitz past her Croatian opponent Anna Konjuh.

Upset alert: Michelle Larcher de Brito beat Agnieszka Radwanska in Miami in 2008, and has previously taken down Maria Sharapova at Wimbledon. I think the Portuguese player might trouble the Pole in this one.

Likely to go the distance: Lucie Safarova and Dominika Cibulkova are both pocket-sized warriors and I expect neither to give an inch in this clash. I’ll back Cibulkova to eke out a hard-fought 3 set win.