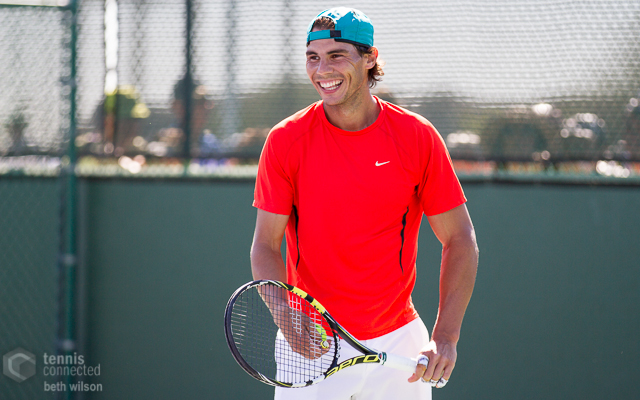 Victoria Azarenka was the highest profile casualty on Day 3, the Belarusian falling to Serbia’s Bojana Jovanovski in a tight 3-setter.

In her tournament return from an injury-induced lay-off, Azarenka exhibited a clear lack of match practice and her opponent took full advantage, with Jovanovski registering the biggest win of her career to date. There was better news for former champions Venus Williams and Petra Kvitova, both of whom recorded straight sets wins.

Li Na scored a comfortable win, as did Agnieszka Radwanksa, whilst there was joy for former finalist Vera Zvonareva, who managed to eke out a thrilling 3-set win over Tara Moore, taking the deciding set 9-7.

In the men’s tournament, Andy Murray was utterly ruthless, conceding just 2 games for the whole match against Blaz Rola. There were straight sets wins for Grigor Dimitrov and Gilles Simon, with Fognini, Anderson, Cilic and Berdych forced to 4 sets to earn victories.

David Ferrer is out of the tournament, going down to the Russian Kuznetsov in 5 sets, whilst French Open semi-finalist Ernests Gulbis lost to Federer’s conqueror from last year, Sergiy Stakhovsky. There were no such problems for top seed Novak Djokovic, who squeezed past Radek Stepanek in a tight 4-setter.

Stan Wawrinka hasn’t had a lot of success at Wimbledon in the past, but as a Grand Slam champion, he must now consider himself capable of succeeding on any surface. The fifth seed wasn’t really challenged in his opening round match, but his Taiwanese opponent on Day 4, Yen-Hsun Lu, will offer more of a test.

Lu is a former quarter-finalist at Wimbledon, and his compact and efficient baseline game is well-suited to the grass-courts of the All England Club. Wawrinka needs to focus on staying aggressive and controlling the rallies, and not letting Lu draw him into long-winded baseline duels. If Wawrinka can dictate the play, he should prevail. Wawrinka in 4.

The lanky Pole Jerzy Janowicz came out of nowhere to make the semi-finals at the All England Club last year, but the fifteenth seed has since struggled somewhat to deal with the elevated expectations that come with success.

The Aussie veteran Hewitt, a winner at Wimbledon more than a decade ago, is still one of the best grass-court players on the ATP Tour and, whilst he is not as quick as he used to be, Hewitt is just as crafty and competitive as he ever was. Look for Hewitt to test Janowicz throughout, but for that huge serve to get the Pole over the line. Janowicz in 5.

This North American pits Canada’s leading man, Milos Raonic, against one of America’s rising stars, Jack Sock. Raonic knows what it is like to bear the weight of expectation, but the Canadian has embraced the spotlight, being a flag-bearer for his sport in Canada and experiencing a very successful and consistent year to date in 2014.

Sock still has a long way to go if he is to recapture the golden days of American tennis, but the youngster definitely has plenty of talent and the type of game that could take him to the top tier of the ATP Tour. I think Raonic will be too strong in this one, but look for Sock to continue to improve in the next season or two. Raonic in 3.

Thirteenth seed and former semi-finalist Richard Gasquet was forced to go to 5 sets to see off young Australian James Duckworth in the first round, and the Frenchman must now defeat another young Aussie, Nick Kyrgios, if he wishes to advance to the round of 32.

Kyrgios, a former world junior champion, has been in fine form this season, winning a trio of Challengers, and looked assured in seeing off French veteran Stephane Robert in the opening round. I think the win is probably beyond Kyrgios at this stage in his career, but I can see him stealing a set and challenging Gasquet for much of the match. Gasquet in 4.

Two years ago, big-serving Lukas Rosol caused a sensation by knocking Rafael Nadal out of Wimbledon. Now, the Czech has the chance to do it once more when the pair meet again in the round of 64 on Day 4.

Having been burnt by Rosol once, Nadal will be very focused for this clash and will be eager to claim revenge for that shock loss in 2012. Nadal looked a bit shaky early on against Klizan in round 1, but gradually eased his way into the match. I think the top seed will handle the Rosol serve much better than he did in 2012, and I will back the Spaniard to come out on top in this one. Nadal in 4.

Put your house on: Serena Williams to steamroll past her second round opponent, South Africa’s Chanelle Scheepers.

Upset alert: Chinese veteran Jie Zheng could cause some problems for eleventh seed Ana Ivanovic in their encounter on Day 4.

Likely to go the distance: Youngsters Victoria Duval and Belinda Bencic both have bright futures ahead of them, and I think they’ll battle each other to the bitter end in this one.