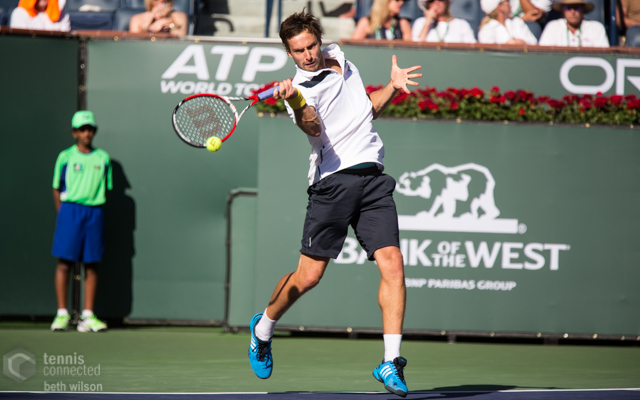 The chaos of Day three was not quite revisited among the denizens of SW19, but some big names tumbled by the wayside.

Gulbis was quick to praise Stakhovsky and admit where his game was struggling.

“Today he served well in the match.  Nothing was working from my side.  Two of my biggest weapons, my serve and return, wasn’t there. Especially the serve.  I couldn’t get any free points from my serve.  There is different reasons because of that.  I don’t want to get into details because of that.

The Latvian continued: “I’m going to probably take some weeks off, and probably I’m going to start only in Toronto because my body needs rest, and my mind needs a little bit rest. It’s more my body.  I have a little bit some problems here and there after Paris, yeah, so I’ll have probably 10 days off and then start practicing again.  So good two, three weeks of practice, then going to USA.”

Following him out of the door was a poorly David Ferrer, who bowed out to Russia’s Andrey Kuznetsov. Ferrer had been suffering from a stomach problem since Roland Garros, which saw him pull out of the Topshelf Open in ‘s-Hertogenbosh as his only warm up to Wimbledon, where he was the top seed.

Kuznetsov was the 2009 Junior Wimbledon champion and could be a potential quarter-final opponent for defending champion Andy Murray.
He said: “It was probably the biggest win in my career. I hope that I will be able to win next matches as well. For me, now it’s more important to recover for next matches and have some rest, especially mentally.”

He continued: “Actually, I don’t even watch my next opponent.  After the game, after today victory, I just ask my father who am I playing next.  It’s just the way it goes on this tournament. So if I on Friday I will beat Leonardo Mayer, then I will ask my coach who I’m playing next, and that’s it.”

On the women’s side two-time Australian Open champion Victoria Azarenka was checked in her comeback to the tour after a foot injury when she lost a tight three-set battle with Serbia’s Bojana Jovanovski. Snapping a six-match losing streak in the first round against Johanna Larson, Jovanovski followed that up by taking the first set off Azarenka, with the Belarusian mirroring that by leveling the match by a single break as well.

Jovanovski took the early initiative on the third set. Breaking straight away for a 2-0 lead and building up a head of steam for 4-1 before Azarenka fought her way back. Azarenka found herself at 5-6 down but 40-0 up when Jovanovski won five straight points on the bounce to win 6-3 3-6 7-5.

Azarenka was hard on herself after the match, but also gave an insight into how motivated she was to be back.
“It’s a little bit too many mistakes like not closing the opportunities, not being sharp enough.  There are a lot of things that still has to be tuned and has to be practiced.  It basically goes down to back to work.”

“I had to start from somewhere.  It didn’t really matter where it is.  I had to start.  I had to start playing and see if I can play pain?free.”
Azarenka had returned on a wildcard at the Eastbourne tournament the week before Wimbledon, with scant time to prepare. But she was keen to point out that this match gave her some positives.

“I’m very motivated.  I’m not taking that as a downer, this match.  I’m going to take it as motivation to be better.”