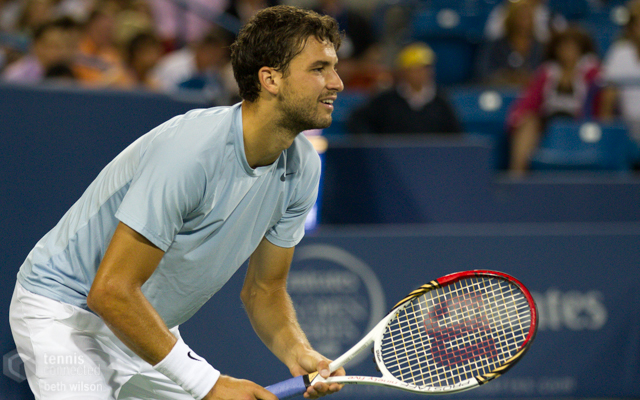 Some of the biggest names in the women’s tournament were in devastating form on Day 2 of the tournament, with Williams, Sharapova, Lisicki, Wozniacki and Radwanska all crushing their respective opponents.

Any hopes that Brit Samantha Murray had of emulating her compatriot and namesake Andy Murray in terms of success at the All England Club were quickly dashed by Maria Sharapova, as the reigning French Open champion allowed her opponent just one game for the match. Former Wimbledon finalists Agnieszka Radwanska and Sabine Lisicki were similarly ruthless, each dropping just 3 games en route to round 2, as did top seed Serena Williams.

In the men’s tournament, world number one Rafael Nadal shrugged off a slow start to see off Martin Klizan in 5 sets, as Jo-Wilfried Tsonga finished off Jurgen Melzer 6-4 in the fifth set of their match that was suspended on Day 1. Swiss stars Roger Federer and Stan Wawrinka recorded straight sets wins, as did John Isner, Milos Raonic, Feliciano Lopez and Kei Nishikori.

There were wins for former champion Lleyton Hewitt and rising star Nick Kyrgios, with former semi-finalists Richard Gasquet and Jerzy Janowicz each being forced to 5 sets in order to reach the second round.

This won’t be an easy match for the fourth seeded Radwanksa, who made it through to the final at the All England Club in 2012. Dellacqua is at a career high 36 in the world rankings, is a tremendous ball-striker, and is comfortable on grass.

Dellacqua has forged a strong doubles partnership with compatriot Ashleigh Barty and, while Dellacqua doesn’t come to the net too frequently during singles matches, she has the confidence to do so if required. I think this is a winnable match for the Aussie, but with all of Radwanska’s experience I expect the Pole to squeeze through in the end. Radwanska in 3.

Aussie Luke Saville is a former junior Wimbledon champion, with a game that closely resembles that of the last Australian winner of the men’s singles at Wimbledon, Lleyton Hewitt. Saville is a super-competitive counterpuncher who will go into this match with absolutely nothing to lose.

Dimitrov was impressive in round 1, but his Aussie coach Roger Rasheed will warn him not to be complacent about the threat that Saville poses. Look for the Bulgarian to come into this match extremely focused and to be too powerful for his opponent in the key moments. Dimitrov in 3.

Wimbledon is Bernard Tomic’s favourite tournament of the year, and it’s certainly the tournament in which his awkward game poses the biggest problems for his opponents. The Aussie is a former quarter-finalist at the All England Club and last year lost a very tight 4-setter to Berdych in the round of 16.

Of course, a year is a long time in tennis, and Tomic has had a dreadful 2014 season to date, hampered by injury and poor form, whilst Berdych has had a very consistent and successful season so far. I expect Tomic to make this contest far closer than it would be on hard-courts or clay, but Berdych has much more confidence and match fitness than Tomic at present, and I expect the Czech star to prevail with relative ease. Berdych in 4.

Sergiy Stakhovsky produced a sensational upset of 7-time champion Roger Federer in the second round of Wimbledon last year in what was a fabulous display of grass-court tennis, but the Ukrainian hasn’t managed to win another Grand Slam match since that momentous victory.

Gulbis enjoyed a breakout tournament at Roland Garros a few weeks ago, also scoring a win over Federer en route to the semi-finals. The challenge for the Latvian is to maintain his consistency after that fine run. I think Gulbis will be too good in this one, but it remains to be seen how far he can progress in the tournament. Gulbis in 4.

After being out of the game for an extended period due to injury, it was great to see Victoria Azarenka back on court on Day 1 of the tournament and even better to see the former world number one return to the winners’ circle. The two-time Australian Open champion isn’t at her best on grass, but the Belarusian still has two semi-final appearances at the All England Club to her name.

Azarenka’s opponent in round 2, Serbian Bojana Jovanovski, is a solid baseliner ranked 45 in the world. Jovanovski will put up a decent fight but, having never progressed beyond the second round in London, is unlikely to really trouble the eighth seed. Azarenka in 2.

Put your house on: Novak Djokovic to overcome the crafty veteran Radek Stepanek. The Czech has plenty of experience and a variety of tricks in his bag, but the top-seeded Serb should be too strong in the end.

Upset alert: After Jo-Wilfried Tsonga was forced to 5 sets in round 1 by Jurgen Melzer, I like Sam Querrey’s chances of causing the upset against the Frenchman in round 2, particularly if the lanky American can get his big serve going.