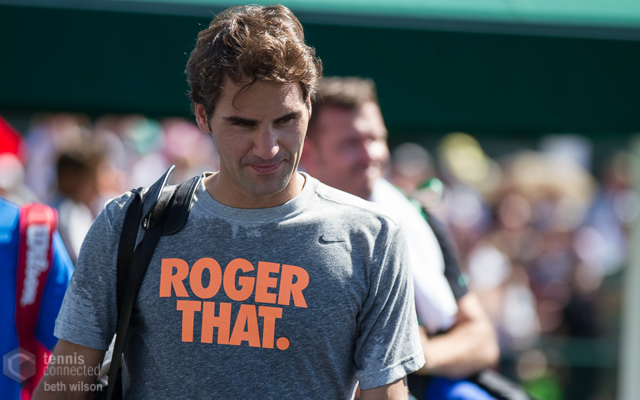 There was a plethora of champions on display on Day 2 of Wimbledon, with World No. 1s Rafael Nadal and Serena Williams, Roger Federer and Maria Sharapova all gracing the show courts.

First up was Roger Federer who made it look all very routine against Paolo Lorenzi, as he coasted through the first two sets, before the Italian started a belated fight back, even having the cheek to challenge on the ace that took the match.

In fairness, Federer might have admitted to being a little rusty as he took six match points to close out the 6-1 6-1 6-3 victory, over Lorenzi who has yet to win a match at a Grand Slam.

Federer took the time to reflect how his game had changed – the addition of Stefan Edberg to his coaching team has seen him return to serve-volley tactics, albeit rather cautiously.

“It’s not just trying to serve and volley some more.  It’s really the bigger picture.  That’s where you have to take some passing shots.  You have to be willing to dig deep on the volleys and not only think, Only if I have high volleys it’s good, otherwise if I have to volley deep I’m in trouble and lose the point every single time.

“I think there’s a way to do it here.  You need to be able to serve well, move well at net, anticipate well, come in on the right shots in the right way. Many things need to work well, but it definitely is still worth it.”

On the women’s side, both Maria Sharapova and Serena Williams also made short work of their opponents. The 2004 champion and reigning French open champion brushed British wildcard Samantha Murray off the court, despite admitting to early jitters.

“It was certainly a slow start.  I wish I didn’t make those errors. But I think as the match progressed, I got more comfortable, found my toss a little bit better.  I think my percentage went up, which was quite important considering she did want to play an aggressive game off of the second serves.”

Even though she is the fifth seed, there is a sense that this ten year anniversary and her win at the French Open could spark something special here.

Jitters also seemed to follow Serena Williams as she fought long and hard for the first game, before racing to a 6-1 6-2 win over Anna Tatishvili. For Williams though, there seemed to be the added worry after a couple of slips on the still lush grass on Centre Court.

She brushed it aside though, saying: “I felt like as the tournament goes on, it usually gets better.  So hopefully I’ll get my bearings a little bit and get better.”

With such decisive wins it was down to men’s World No. 1 Rafael Nadal to give the crowds something to worry about. After being knocked out in the second round in 2012 by Lukas Rosol, and then in the first round by Steve Darcis, hearts were fluttering when Martin Klizan took the first set off the Spaniard.

Klizan is no easy walkover – having hustled Kei Nishikori out of the French Open at the start of the month. But order was soon restored as Nadal put the pedal to the metal and pushed past Klizan 4-6 6-3 6-3 6-3, notching up his 700th tour-level victory in the process. His reward? A second round match-up with Rosol again.

Day Three opens with defending champion Andy Murray on Court No. 1 with Novak Djokovic currently closing out the day’s schedule on Centre Court.