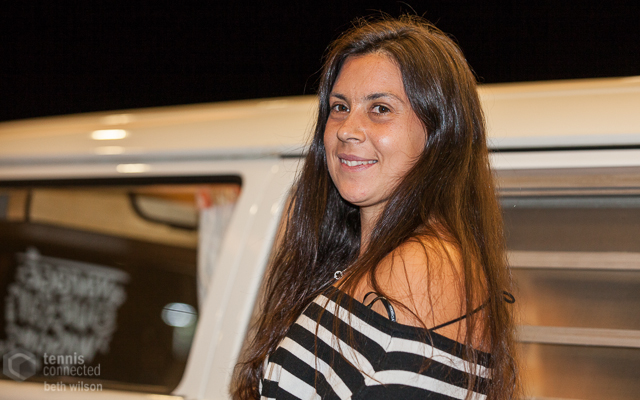 There has always been something engagingly quirky about Bartoli – whether it was the bunny hops that took her to her first Wimbledon final in 2007 before finally achieving her dream in 2013, along with shadow swings and a backbend at the end that most gymnasts would envy!

But does she miss any of this? Will she feel a pang of regret when her well and truly vanquished opponent on that day walks out on Tuesday?

“Definitely no regrets at all.  I totally moved on into something different.  I just launched my shoe line three weeks ago during the French Open.  Designing jewellery, too.

“So many things going on in my life right now, but just extremely honoured to be still the 2013 Wimbledon champion and reigning champion just for the last two weeks.”

Listening to her talk about the literal pain of competing, the fact that by the end of her career, even including those two magical weeks, she could barely lift her shoulder, it is hard to believe she ever enjoyed the competition, and the grind of it all. If she had to give her younger self starting out now any advice in light of what she achieved, and what it cost to get there, what would she say:

“I would not change anything to what I did before.  I mean, yes, it was difficult.  Yes, I found I could [have quit] a million times. But at the end of the day, that was my path.  That was my destiny, to kind of win it when expecting the less.

“Honestly, I felt like in 2011 when I enter Wimbledon, coming out from the French Open semifinal, winning in Eastbourne, and arriving here, I felt that was my best chance to actually win the title. Then I arrive in 2013.  When I expected totally the less, that’s when actually that I won without dropping a set, on an ace.

“So I would probably just tell myself, Well, just dive in and just see how it goes.  And here went beautifully.  I mean, it was a fairytale that actually
happened to my life last year.  I finally got my title. That’s the last memory that stays forever inside my heart and my mind.  I wish I could have won ten.  I just won once.  But it’s just the best one actually I won.”

Whilst it is a charming tradition to have the defending champion walk out on the first day, there have obviously times when it has not been possible, for example Rafael pulling out in 2009 after his epic win against Roger Federer meant that the Swiss had the honours of opening up play the following year.

This year Sabine Lisicki will return to walk out on Centre Court on Tuesday, with Bartoli watching on in the Royal Box.
“I’m invited into the Royal Box.  If I don’t do anything stupid by Tuesday, I think I will be there.”