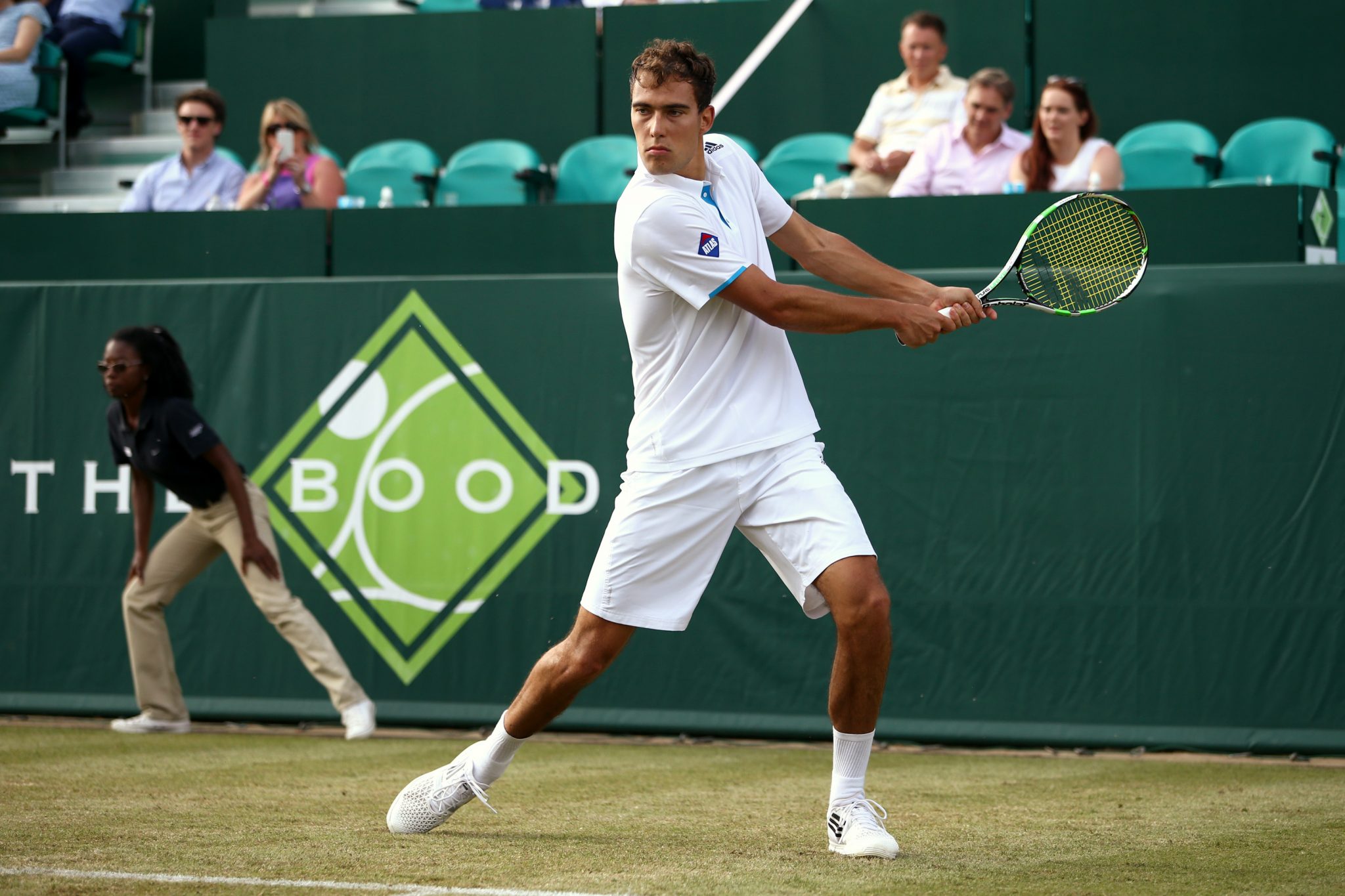 There has been a small matter of the Football World Cup, and like many of the population, I spent Thursday night with my head in my hands, then leaping about my hotel room (in this case) and then head in my hands again.

So how relieved was I to move away from the coast for a day and head to the exhibition event run at Stoke Park – The Boodles.
Even the name sounds quintessentially English, and the clientele make the gentry of Wimbledon look shabby by comparison.

The Boodles is an exhibition event that allows players to get some grass practice in but also to have a little fun, with the highlight on Friday being the stern Jerzy Janowicz and the playful Jack Sock. Janowicz is hilarious. Even when he is having fun on court he looks angry, but have fun he did, joking around with sock while showing off his blistering serve that took him to the semi-finals of Wimbledon last year.

Janowicz talked about why he chose to come back this year: “It is all the fun, I remember my match with Grigor Dimitrov last year  and we had a lot of fun. I remember he put sun lotion on my back! I knew what to expect. I knew it was going to be a lot of fun again, great hospitality – so that is why I came back.”

Few tennis fans will forget him trembling with emotion, incapable of speech after beating his compatriot Lukas Kubot in the quarter-final and he did have eventual champion Andy Murray rattled, especially when he demanded that the roof be closed.

Jack Sock was an interesting watch. It is fair to say that the USA is looking for its next huge star, and Sock may well be it. Good serves, solid from the back of the court but nifty enough to play drop-shot-jeopardy with Janowicz, he turned on the charm and the crowd absolutely lapped it up.

Meanwhile back down in Eastbourne on the Saturday, the conditions could not have been any different to last year. There would be no practically playing through clouds for the finalists this year, or battling the “breeze” that actually took on the persona of mini-tornadoes.

In glorious sunshine, a new star was born. The wonderfully engaging Madison Keys had to overcome a 0-2 head to head deficit against the vastly more experienced Top 10 Angelique Kerber. Kerber is one of the most consistent women on the tour. She runs everything down, she has a demon leftie serve and she never gives up.
Keys came out swinging, and she has a brutal serve – one of the best in the game already and this girl is just 19. She pulled ahead to a lead while Kerber was at odds with where this cannonball serve was going to land next.

But we are talking about a Wimbledon semi-finalist here – Kerber has the skills on grass, and also perhaps some nerves were creeping in as Kerber took the advantage and kept the pressure to level the match.

Now was a real test for the American and that last set could not have been closer. In fact if truth be told it looked like Kerber would just edge it as she had Keys 0-30 at 5-5 but the 19-year-old dug herself out of that hole, but could not convert on three match points, but edged the match 6-3 3-6 7-5.

“I’m just so incredibly happy,” Keys said after the match. “It’s one of those things where when you’re training and you don’t want to be there, you’re tired or everything hurts, you think of this moment, and it really helps push you through all of the hard times. I’m just incredibly happy right now.”

Much to the amusement of all, Keys will have to drink the jeroboam of champagne while she is in this country as she’s too young in the US to have it!
The stage was then set for the men to live up to the high quality of the final. In its last running of the ATP 250 at Eastbourne, defending champion Feliciano Lopez showed that it certainly was acceptable to constantly stroll around the grounds munching on (overpriced) ice-cream when he retained his title 6-3 6-7(5) 7-5 over Richard Gasquet, making a welcome return to competition after a back injury that ruled him out of play between Miami and a too brief appearance at Roland Garros.

Lopez seems to have a thing about beating back the French at the coast – almost armada-like! But more importantly it was his first win against a player who can inflict a lot of damage on grass.

“He beat me five times before, quite a lot,” said Lopez, who trailed Gasquet 0-5 against Gasquet. “I have to be even a little bit more happy, because I knew Richard is going to be so tough to beat today. When a player beats you five times before, you don’t know what’s going (to happen) and how can you manage the situation to beat him for the first time. And I did. It’s a great feeling.

“The way I play here is completely different from when I play on the other surfaces around the world. That’s really one of the most important things. Then my attitude was great. I was fighting. Even though I lost the second set, I was (fighting) all the time.”

Lopez had started brightly and with intent, edging ahead an early break but Gasquet was just a little more solid in the second set tie-break. The appreciative Eastbourne crowds were in for a treat as the deciding set for the men was every bit as competitive as for the women’s final.

It was just a forehand error from Gasquet which gave the Spaniard a decisive break for 6-5 and he served out the match to retain the title.

“[It’s] always difficult to lose the final,” said Gasquet. “It’s always very disappointing, but I try my best. I think on two break points I could do a little bit better, maybe return faster than I did. But it’s tennis. I try to fight the best I could.

“Of course it’s a tough half an hour after I lose, but of course I will take positives and I try my best next week again.”

There is scant time for the champions to revel in their glory. With the draw out, thoughts now turn to The Championships at Wimbledon.
Keys will open against another up and coming star Monica Puig, and Lopez meets a qualifier Yuichi Sugita. Seeded players in Keys part of the draw must be feeling wary.