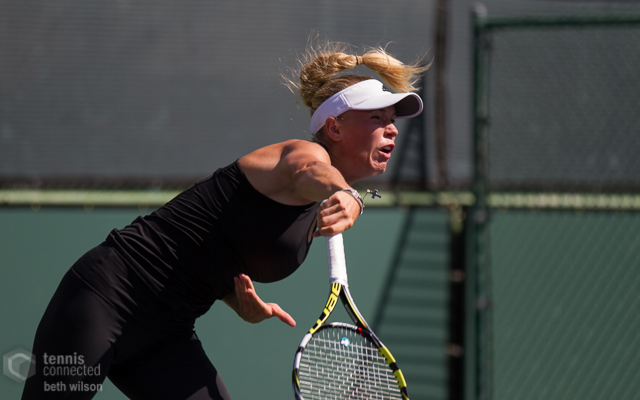 Down by the sea-side the sun shone, especially on the WTA seeds that were largely still left in the draw after the early round carnage. And with the World Cup underway, there were some lovely light moments – for example staunch Liverpool fan Caroline Wozniacki being more than a match for the cynical British press about the football.

She admitted that a family friend was left disappointed when she pledged her allegiance to the England team fielding no less than fie Liverpool FC players (her favourite team) and she positively lit up when she spoke about Raheem Sterling:

“What he showed this year is incredible. I think he’s really showed how much he’s matured, and I think we’re going to see a lot of him the next few years.

“I think he’s going to be one of the strengths. Hopefully he’ll stay in Liverpool for many years to come because I think we will need him.”

Oh, and she was pretty happy with extending her lead over Sloane Stephens to book her place in the quarter-finals to face Azarenka-slayer Camila Giorgi.

There was place for some British joy as the No. 1 player pulled out another three set victory, this time over Flavia Pennetta. It has been great to see Watson truly look match fit after the after-effects of Glandular Fever really rendered her energy- and maybe even motivation-less. Given that she faces Petra Kvitova, who is renowned for the three-match grind, it is as well that she’s getting used to being out there.

There is an all-American clash with Lauren Davis and Madison Keys. Both are great strikers of the ball, and it is great to see new American talent shining instead of being footnotes – in part thanks to Sloane Stephens falling earlier in the day to Wozniacki.

There were mixed fortunes through for defending champions – on the women’s side Elena Vesnina bowed out to Keys while men’s champion Feliciano Lopez kept his bid alive.

With the Wimbledon draw out, the business end of Eastbourne as no-one will necessarily ant long drawn out matches as quarter-finals day looms on Thursday.