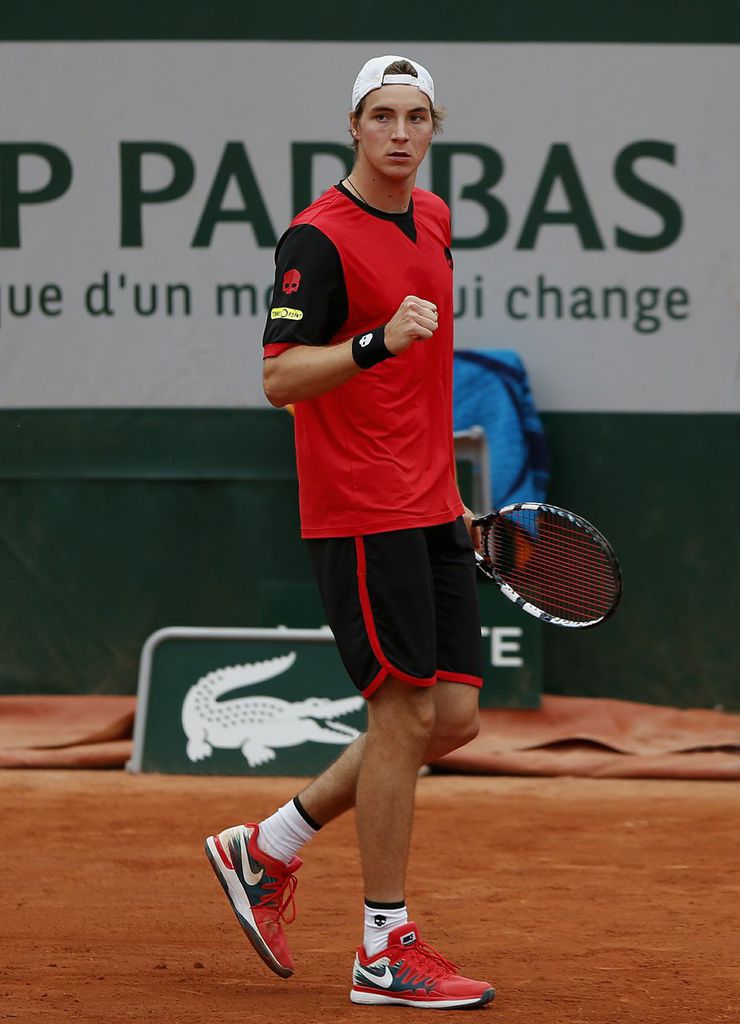 Continuing in the great tradition of previous German stars like Boris Becker and Michael Stich, 24-year-old Jan-Lennard Struff has every intention of joining his heroes at the top of the ATP World Tour rankings. Currently ranked No. 65 in the world, Struff has already reached the semifinals of two ATP World Tour events this year in Marseille and Munich, while taking home the title at the Heilbronn II Challenger in Germany.

Possessing a powerful game led by a sonic forehand and a hefty serve, Struff’s tall stature and athleticism have allowed him to compete well on every surface. In the following Q&A, Struff discusses his improvement on Tour throughout the past 12 months, while preparing for Wimbledon by taking part in the Topshelf Open in ‘s-Hertogenbosch, the Netherlands this week.

Q) You’ve cut your ranking in half from this time last year, what aspects of your game have you worked on to achieve this goal?

A) I have worked more regularly on my fitness and it has been paying off immediately, although I know I still have a lot of work to do. I have recently asked my fitness trainer Uwe Liedke to travel with me and I am glad he accepted. I also worked on my serve and on my game overall. If I had to name two specific aspects that have improved then I’d say my fitness and serve.

Q) You recently played a great match against Gael Monfils at Roland Garros before losing in the second-round. What lessons did you take away from that loss?

A) What I have learned is that I was playing a good level of tennis—close to his level—but I was still far away from winning. He played the important points really well and it is important for me to feel how top guys play in important moments.

The more matches I will play against the top players, the more I will learn from them and hopefully one day be on the winner’s side.

Q) What does a normal training day look like for you? Is your current focus based more around strength training or technical improvement?

A) We keep working on everything, even when we focus on strength. We normally do two sessions of tennis and then we add fitness. Tennis remains always the base of each working day.

Q) You’ve already had a chance to compete at all four Grand Slams. Which event is your favorite and which would you like to win the most?

A) I like clay and as a child I have been to Paris with my mother as a spectator and I think Roland Garros is my favorite slam to play. But all the others have their own beautiful side and are great as well.

I am looking forward to the flair of Wimbledon.

Q) Germany has always had a great history of top players for the upcoming generations to emulate. Do you find it motivating to follow in the footsteps of Boris Becker, Michael Stich and Tommy Haas, or does that expectation put a lot of pressure on your shoulders?

A) I am really happy that Germany has had such a great history with champions like Steffi Graf, Boris Becker and Michael Stich. When they were winning I was a little and I got to know their achievements a few years later while growing up.

We still have very good players in Germany and it is something very positive for all of us. The heritage of these champions is no pressure at all for me, it’s more of a motivating factor.

Q) Beginning your tennis career at the age of six, what instantly drew you toward the sport and what kept you going as the years progressed?

A) My parents were both tennis coaches, working in the same club. I would practice with my father and very rarely with my mother. Until the age of 12 I kept playing soccer before I had to choose. I often skipped soccer practice because I couldn’t combine two sports and I focused on improving my tennis.

Q) What has been the single greatest challenge that you’ve had to overcome thus far in your career?

A) I can’t say I’ve had any great challenges thus far. A few minor injuries maybe, but everything else has gone really well. Of course I had to finish high school before trying to become a pro and the last years in school were difficult. I started as pro with some delays in progress compared to some other players of my age.

The deal with my parents has always been that I should continue playing tennis as long as I kept enjoying it and they would support me.

After I got my Abitur (German high school degree) we decided that I should try the Tour for one year to see if I could find out what my potential could be. After that trial year, I realized I had the skills to play on the Tour.

Q) What ranking goals do you have for the remainder of 2014?

A) I don’t have any specific ranking goals. I want to play as many matches on tour level and improve my game.

Q) Who are your best friends on Tour? Do you think it’s important for players to be friendly on Tour, or should they keep their distance in order to remain competitive on court?

A) I don’t want to name anyone special, in order not to disappoint others. I get along well with almost all of the players, especially with the Germans. We always go for dinner together and have lots of fun.

I believe friendship is important. Everything is funnier if you have friends around. It would be really dull if each of us were isolated and not socializing.

Of course, when you play each other, then you put aside the friendship. That’s easy to do.