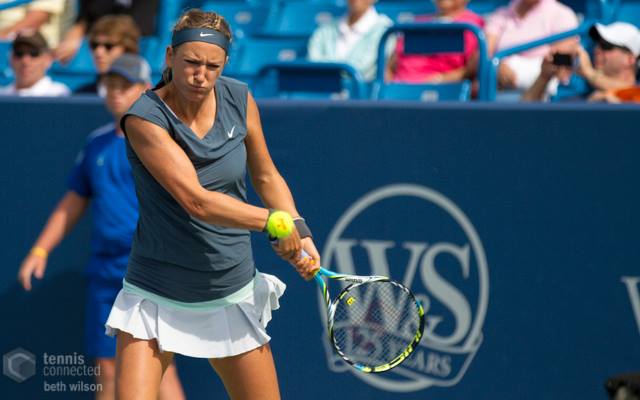 It was not a good day for the seeds again, as organisers run for the nearest Magnum (ice-cream) concession as Victoria Azarenka’s comeback ended in a three set thriller against Camila Giorgi.

After amusing the crowds at Queen’s Club as part of the Rally 4 Bally she was given a workout by Camila Giorgi as the fearless Italian prevailed 4-6 6-3 7-5.

Having lost top draw Agnieszka Radwanska on the first day, arguably their next biggest draw, wildcard fourth seed and World No. 8 Azarenka put up a good fight, coming back from 2-4 down to reel off four games in a row before being left standing at the start of the second set as Giorgio took control racing out to a 5-0 lead before Azarenka mounted a bit of a comeback.

The final set saw the crowd come alive and really throw themselves behind Giorgi as the two-time Grand Slam champion and former World No 1 just looked to be a little step-slow at times, something that she was free to admit after the match.

“That’s what you miss a little bit when you don’t compete is to get that–not even movement. It’s just the reaction of the ball and where to go, quick decision-making. I think that’s important, especially on grass.

Her opponent’s consistency saw her reach the final in Katowice earlier this year, and while it is a good win for her, there is no doubt about her focus.

“I think it’s a good match. Now I must think about the second round.”

She faces Britain’s Johanna Konta in the next round.

Another seed that fell by the way side was Jelena Jankovic, who has not really learned to love grass, as she was brushed aside my USA’s Madison Keys. Keys has the kind of power game that always seems to flummox Jankovic, who was ranting away.

Keys said: “It was pretty, just really solid, wasn’t playing out of my mind or anything like that. After the first couple of games I served really well and I was returning pretty well. I felt like I was just taking time away really well.

“It kind of keeps you going and everything, knowing you’re getting to them and they’re kind of starting to lose it.”

Home crowd hopes did better with the women, as the British No. 1 Heather Watson and the British No. 3 Johanna Konta bookended the day with wins. The stalwarts who braved what passes for a summer evening (read very cold once the sun goes in) sat out in the dying light to cheer on Heather Watson who fought back to force a decider over grass court warrior Tsvetana Pironkova, who capitulated in the third set.

Donald Young continued his climb up the rankings as he put paid to Britain’s James Ward comparatively easily 6-3 6-2, as he continues to climb back up the rankings, starting just inside the Top 100 at the start of the year, and is now just outside the Top 60.

The ATP action leads on Wednesday with a match up of Richard Gasquet against Bernard Tomic. Gasquet, who was made to get up close and personal with a falcon for a photo opportunity looked pain free in practice as the battle of the injured headlines the day’s action at Eastbourne.