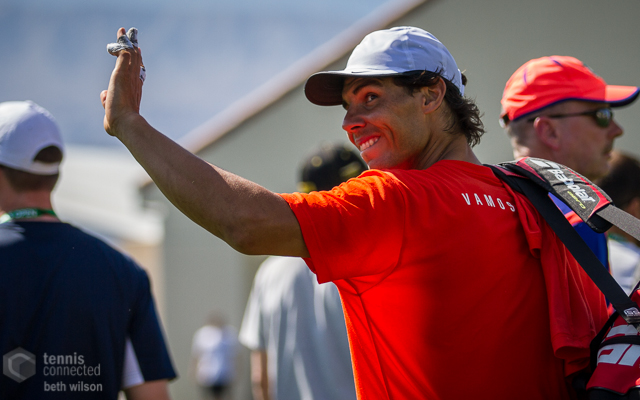 Rafael Nadal further cemented his status as the most brilliant clay-courter of all time, the Spaniard beating his great rival Novak Djokovic in 4 sets on Day 15 to win a fifth successive French Open title and the fourteenth Grand Slam of his illustrious career.

In hot and humid conditions, the match got off to a relatively slow start, the players feeling each other out and adapting to the conditions on court. At 3-all, Nadal pressured the Djokovic serve, only for the Serb to get out of trouble and then break the top seed to establish a 5-3 lead. Nadal had his chances to break right back at 15-40 on the Djokovic serve, but a pair of forehand errors from Nadal allowed Djokovic to get to deuce and then finish off the game to gain a one set advantage.

Having won all 8 of his previous matches against Nadal in which he’d won the first set, Djokovic had every reason to be confident going into the second set, but Nadal hung tough and took his chance in the sixth game, setting up the break with some enormous forehands and celebrating it with some equally enormous fist pumps.

Unfortunately for the Spaniard, the celebrations were short-lived as the Serb broke back immediately and went on to level at 4 games apiece. The players appeared to be headed for a tiebreaker to settle the second set, but Nadal struck a vital blow in the twelfth game, breaking the Serb to claim the set, 7-5, and level the match at one set all.

With the court drying out in the warm conditions, allowing Nadal’s viciously top-spun groundstrokes to jump even further off court than usual, the Spaniard pounced at the beginning of the third set, an errant backhand volley from Djokovic handing Nadal a 2-0 lead. Djokovic looked weary in what were draining conditions, and a second break to the Spaniard gave him a stranglehold on the third set. The 8-time champion ultimately claimed the set 6-2, and appeared in pole position to score a record ninth title at Roland Garros.

With Djokovic’s signature backhand wing misfiring under a barrage of Nadal groundstrokes, the Spaniard surged for the finish line, breaking the Serb to set up a 4-2 lead. Djokovic refused to go away, successfully attacking the Nadal forehand as he got back to 4-all. With the man from Mallorca once again hampered by back problems, the match was suddenly alive once more, the crowd sensing that the contest was on the verge of entering a fifth set.

Although his back was aching, Nadal gamely held on to his serve to take a 5-4 lead in the fourth set and force Djokovic to serve to stay in the championship. A vintage backhand passing shot gave the Spaniard a sniff of victory, and an anti-climactic double fault from Djokovic on match point gave him a ninth French Open crown and one of the most emotional victories of his career.

If there was ever any doubt as to Nadal’s status among the greats, the Spaniard put them to rest, moving alongside Pete Sampras on the all-time Grand Slam winners’ list with major number 14, and becoming the first man to win a Grand Slam title in 10 consecutive years. In many ways, it was a classic Nadal performance – a relentless, courageous, astute display that completely gutted his gallant opponent. Having endured plenty of criticism in the lead-up to Paris as a result of his supposedly mediocre clay-court season, this win will no doubt be one of the most satisfying of Nadal’s glittering career.

For Djokovic, it’s another missed opportunity to complete the career Grand Slam, the Serb coming much closer than the final score might indicate. With Nadal’s movement becoming impaired toward the end of the fourth set, I think Djokovic would have been the stronger player in a fifth set, if only he could have managed to take the match into a decider.

Djokovic had the right tactics in the final, staying aggressive, stepping inside the court and punishing Nadal down the line with anything short, but ultimately the second seed was unable to sustain his level for enough of the match. Of course, as the past decade at Roland Garros has underlined in glaring detail, only a complete performance of sustained brilliance will allow a player to beat Nadal at the Grand Slam he loves the most.

That’s it for today. I hope you have enjoyed the coverage of this year’s French Open. Enjoy the move to the grass-courts and I’ll be back in a fortnight for the start of Wimbledon. In the meantime, you can follow me on Twitter: @satelliteserve.