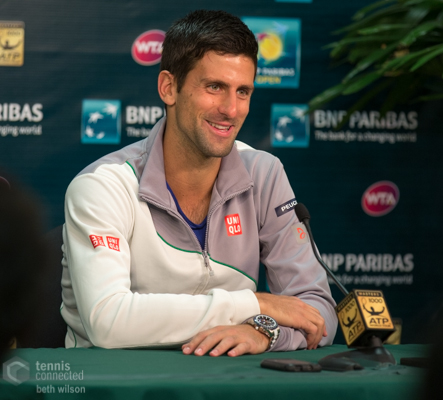 Maria Sharapova is the French Open ladies’ singles champion once more, the Russian claiming her second title in Paris and the fifth Grand Slam of her career   with a 3 set win over a gutsy Simona Halep in an enthralling final on Day 14.

With Halep playing in her first ever Grand Slam final, there were some doubts as to whether the Romanian would be able to handle the pressure which inevitably accompanies such matches. But the 22 year old looked at ease on court right from the outset, breaking Sharapova in the opening game of the match en route to a 2-0 lead.

Halep’s fast start catapulted Sharapova into action, as the 2012 French Open champion upped the ante on her groundstrokes and reeled off 5 games in a row to take control of the first set, the Russian ultimately taking it 6-4.

When Sharapova broke the Halep serve early in the second set, it looked as though the fourth seed might end up wilting in the spotlight, but the crafty Romanian turned things around in the second set as her opponent struggled on serve. Halep served for the second set at 5-4, and then at 6-5, but both times Sharapova lifted her game to deny her opponent the set. Sharapova got the early lead in tiebreaker, setting up a 5-3 advantage, before 4 errors in a row handed Halep the set and pushed the match into a decider.

With the Parisian crowd clearly favouring the underdog Halep, Sharapova was forced to compose herself, and the 27 year old used her extra power from the back of the court to move ahead 4-2 in the third set. When her shaky serve again failed her, Sharapova found herself locked at a set apiece and 4-all in the third set. Sharapova’s far greater big match experience proved priceless at this point, with the Russian breaking Halep to love in the ninth game before putting aside her serving woes and duly serving out the set for a 6-4 6-7(5) 6-4 win in 3 hours and 2 minutes.

As a visibly emotional Sharapova acknowledged afterwards, it was an epic struggle and a glorious victory in what she rated as her toughest ever Grand Slam final. For Halep, it will be a hard loss to digest, but the gifted Romanian showcased her full range of talents on one of the sport’s biggest stages, and I’d be surprised if we don’t see her in another Grand Slam final in the next few years.

To be honest, what more can be said or written about the most frequent contest in tennis history? Novak Djokovic and Rafael Nadal meet on the final day of the tournament in what will be their forty-second career match against one another. Nadal holds a slim 22-19 advantage over his opponent, although Djokovic has been narrowing the gap of late, winning his last 4 encounters against the Spaniard.

For Djokovic, he needs to forget that he is playing at Roland Garros, where Nadal has reigned supreme for the last decade, and focus on his successes against Nadal. The Serbian beat Nadal on clay in Monte Carlo last year, and again in Rome this year, and was mighty close to dethroning the world number one in Paris last year, losing a thrilling 5-set semi-final 9-7 in the decider.

Djokovic is desperate to win in Paris and complete the career Grand Slam, which would elevate him into the top echelon of players in the history of the sport. Last year, that desperation probably crossed over into obsession and had a negative effect on his play in Paris. This year, I sense the Serbian has got the balance right – he’s incredibly determined to beat Nadal of course, but he’s  been keeping a lid on his emotions in the lead up to the final.

I think Djokovic will win this match if he adopts the mindset that has served him well against Nadal of late. The second seed needs to remain inside the baseline as much as possible, attack the Nadal backhand and second serve, and finish points off with his backhand down the line whenever he can. I also like it when Djokovic attacks the net to finish points off against Nadal.

For Nadal fans, there is plenty to be positive about, not the least being his mind-blowing 65-1 career record at Roland Garros. Additionally, the Spaniard was in scintillating form in his semi-final, reducing Murray to amateur level status by the end of the 3 sets. Nadal needs to make sure he doesn’t get bullied around the court by Djokovic, one of the few players capable of putting the top seed on the back foot, and he needs to be aggressive with his forehand and consistent with his depth on the backhand. Anything too short against Djokovic will be dealt with severely.

If the final is anything like the absorbing semi-final between the pair in Paris last year, tennis fans are in for a treat. To my mind, with so little separating the pair, much will depend on the conditions for the day. Hot, baking conditions will suit Nadal, while cooler, breezier weather will favour Djokovic. I picked Djokovic at the outset of the tournament, and I’m sticking with the Serb, whom I’m predicting will avenge last year’s loss to Nadal by the slimmest of margins. Djokovic in 5.

That’s it for today. Enjoy the tennis and I’ll be back with another serve tomorrow to recap the men’s final. In the meantime, you can follow me on Twitter: @satelliteserve.