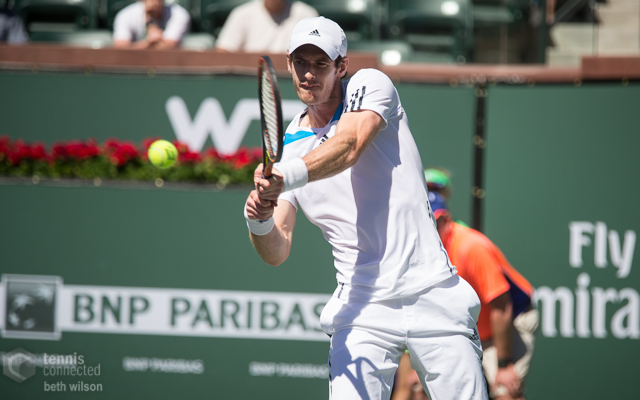 Simona Halep will play Maria Sharapova in Saturday’s ladies’ singles final after the Romanian beat Andrea Petkovic in straight sets to make it through to her first ever Grand Slam final.

Both Halep and Petkovic were competing in their first Grand Slam semi-final, but it was the fourth seed who handled the occasion much better, winning 17 of the first 24 points of the match to establish a commanding 4-1 lead after just 14 minutes. Halep’s compact all-court game was causing a string of problems for the German, with the Romanian promptly wrapping up the first set, 6-2.

Petkovic gathered herself at the start of the second set, starting to dictate play more often courtesy of her powerful groundstrokes. The German sped out to a 3-1 lead in the second set before immediately letting Halep back into the set by dropping serve. From there, games went with serve before the players entered a tiebreaker. In a microcosm of the match itself, Halep raced out to an early lead, with Petkovic working her way back into the contest before ultimately losing out. After 90 minutes, it was all over, Halep collecting a 6-2 7-6(4) win to move into the final and move up to number 3 in the world rankings.

Earlier in the day, Maria Sharapova won her third straight match from a set down to book her place in a third consecutive French Open final. Struggling with her serve from the outset, Sharapova went down a break but promptly recovered for 4-all in the first set, only to lose serve once more and allow Eugenie Bouchard to claim the opening set, 6-4.

The crowd expected Sharapova to come out firing in the second set, and the Russian duly obliged, improving the depth of her shots as she established a 5-2 lead. But Bouchard refused to go away, drawing level at 5-all before Sharapova upped her aggression and took the set, 7-5, to force a decider.

After Bouchard recovered from an early break down in the third set, the pivotal moment of the match was the fourth game of the third set, in which Bouchard squandered a 40-0 lead on serve to hand Sharapova a 3-1 lead. From there, the Russian was never troubled, going on to score a 4-6 7-5 6-2 win in 2 hours and 27 minutes.

After outlasting Roger Federer in a thrilling 5-setter and then disposing of Tomas Berdych in a clinical display in the quarter-finals, can Ernests Gulbis, the offbeat, shaggy haired Latvian, do it once more against second seed and 6-time major champion Novak Djokovic?

Gulbis has always had the talent, training at the Niki Pilic tennis academy in Munich alongside Djokovic when they were teenagers. But while Djokovic remain totally focused and committed to becoming an elite player, Gulbis drifted along, lacking the discipline to push himself in training and losing concentration (and often, his temper) in matches. But the 25 year old has worked hard under Austrian coach Gunther Bresnik and has turned around his career in 2014, ranking second in wins for the year to date, behind only Nadal.

Gulbis comes into this match on a 9 match winning streak on clay, having won in Nice in the lead-up to Paris, and he will not be overawed in this match. Expect plenty of long backhand to backhand rallies, that being the wing which both players favour. Djokovic’s defensive abilities and court coverage are legendary, so the real question is whether Gulbis can be wise in his choice of when to attack and when to be patient and rally.

Djokovic leads 4-1 in career meetings, and annihilated Gulbis in their last meeting in 2011, allowing the Latvian a solitary game in Indian Wells. But that was before Gulbis turned around his attitude and his career. I suspect Djokovic will play pretty conservatively, giving Gulbis no free points and forcing the Latvian to push the envelope, and thus it will be fascinating to see whether Gulbis can play smart or if he will implode. I think he’ll have ups and downs in this match, whereas Djokovic will be rock solid throughout. Djokovic in 4.

The match between Murray and Nadal in Rome last month marked the first meeting between the pair since 2011, when Murray broke a 5 match winning streak for Nadal in Tokyo. The Rome clash proved to be an absorbing encounter, with Murray pushing Nadal all the way and having plenty of chances to score what would have been a maiden win over Nadal on the red dirt. But Nadal, as he so often does, found a way to win without playing at his best.

I’m intrigued to see whether Murray can feed off his terrific effort in Rome, or whether Nadal will make some adjustments to his game as a result of that match. The Spaniard is an underrated tactician, always tinkering with his game and reacting to changes made by his opponents. It was this tactical nous, among other things, that allowed Nadal to reclaim the top spot in the rankings from Djokovic, as he was forced to overcome a bad streak against the Serbian.

Unfortunately for Murray, I think the challenge on Day 13 is significantly greater than the one he faced in Rome. For a start, Nadal loves the courts in Paris, especially when they dry out. Secondly, the match in Rome was at night, where the faster conditions help Murray. Additionally, it’s one thing to beat Nadal in a best of 3 sets format; it’s a much harder task to outlast the Spaniard in a best of 5 sets match. Look for Murray to get on the aggressive and try to keep the points relatively short, with Nadal ultimately proving too strong with his laser-like forehand. Nadal in 4.