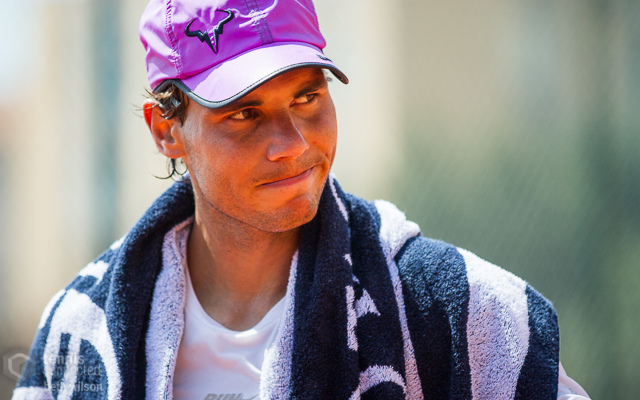 Many pundits doubted whether the erratic Gulbis could back up his magnificent win over Federer against another top 10 opponent, but the eighteenth seed was in complete control against the former Wimbledon finalist, racing out to a 4-0 lead in the opening set and never looking back. Berdych appeared out of sorts and seemed sluggish for large parts of the match, unable to get any sort of momentum as Gulbis recorded win number 32 for 2014 – second only to Nadal for total matches won for the season to date.

Gulbis will face second seed Novak Djokovic for a place in Sunday’s final after the Serb defeated Milos Raonic in a tight 3-setter, 7-5 7-6(4) 6-4. The Canadian was appearing in his first ever major quarter-final and gave a good account of himself, however the 6-time Grand Slam champion was too strong on the big points, booking a spot in what will be his sixth Roland Garros semi-final.

In the women’s quarter-finals on Day 10, young Canadian Eugenie Bouchard continued her rise to the top, becoming the only player to reach the semi-finals of both of this year’s Grand Slams by outlasting Carla Suarez Navarro in 3 sets. The Spaniard only has herself to blame, having established winning positions in both the first and third sets, only to tighten up and hand back the ascendency to the ultra-competitive Bouchard.

In order to make Saturday’s women’s final, Bouchard will need to topple 2012 champion Maria Sharapova. The Russian came from a set down for the second successive match, ultimately proving too good for Spaniard Garbine Muguruza. Sharapova quickly found herself a set down, but maintained a perfect record across her last 18 clay-court 3-setters, eventually prevailing 1-6 7-5 6-1.

It was only a few years ago that Andrea Petkovic was the toast of women’s tennis, rising to number 9 in the world rankings and enthralling her fans with her unique dance moves. Alas, a myriad of injuries saw the German endure time off the WTA Tour and slide down the rankings, but she has proved in this tournament that she is now back to somewhere near her best.

Errani is a proven clay-court performer, making the French Open final in 2012 and the Rome final earlier this season. Petkovic is the more aggressive player, so the outcome of the match is on her racquet to a large degree. Errani will pounce on any weakness, and therefore the German will need to play a near-perfect match to prevail. Errani in 3.

Andy Murray admitted after his win over Fernando Verdasco that Gael Monfils is one of his favourite players to watch on the ATP Tour. That may well be true, but the Scot will need to focus on his own game if he is to make it through to the second French Open semi-final of his career.

Monfils, a semi-finalist in Paris way back in 2008, is thriving in front of his home crowd and the twenty-third seed has nothing to lose against the seventh-seeded Murray. Murray is by far the steadier player of the two, and if Monfils isn’t focused on his service games then the Frenchman could get easily beaten. I think Monfils will play well, but I think Murray will be a little too consistent in all departments. Murray in 4.

Kuznetsova won in Paris in 2009 and was awfully close to eliminating Serena Williams at this stage of the tournament last year. On the red dirt, the Russian’s heavily top-spun shots cause all sorts of problems for her opponents, and even in the twilight of her career the Russian looks to be fighting fit. I’ll back Kuznetsova to spring an upset and return to the Roland Garros semi-finals. Kuznetsova in 3.

This rematch of last year’s French Open final is an interesting one. On one hand, Nadal is the top seed and 8-time champion who conceded just 8 games to Ferrer in the final at Roland Garros last year. On the other hand, Nadal is not at his best right now and Ferrer will be full of confidence after besting his compatriot in Monte Carlo.

To my mind, Ferrer is definitely capable of beating Nadal if the world number one is not at his best, but if Nadal is playing well then I always think that Ferrer lacks the killer shot to end a rally against his illustrious countryman. Ferrer will make him earn it, but I’m backing Nadal to prevail. Nadal in 4.