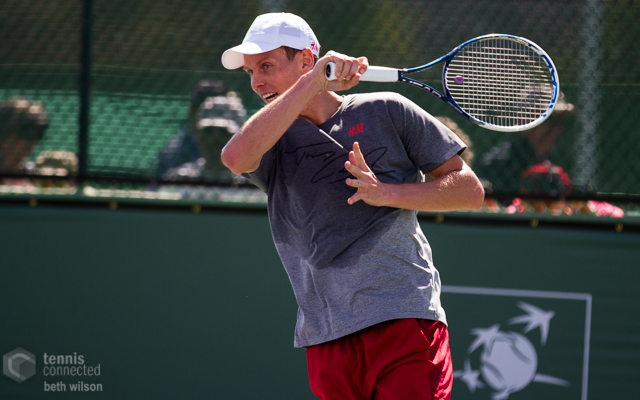 Rafael Nadal demonstrated in emphatic fashion on Day 9 of the French Open that he is in no mood to give up his crown, thrashing young Serbian Dusan Lajovic in straight sets on Centre Court and conceding just 4 games for the entire match.

Appearing in the fourth round of a Grand Slam for the first time in his career, Lajovic appeared overawed by the occasion and by Nadal’s intensity, going down a set in quick fashion and then being left utterly helpless as Nadal rolled off 17 consecutive points to start the second set. From there, the youngster showed a few encouraging signs, but the result was never in doubt.

Nadal will face compatriot David Ferrer for a place in the semi-finals, in what will be a rematch of last year’s French Open final, after Ferrer outclassed Kevin Anderson, pulling away in the fourth set after conceding the third set in a tiebreaker to the South African.

To the delight of the local fans in Paris, the run of Gael Monfils continued on Day 9. The Frenchman raced out of the blocks against Stan Wawrinka’s conqueror, Guillermo Garcia-Lopez, Monfils bageling the Spaniard in the opening set and dropping just a pair of games in the second set. Monfils went up an early break in the third set, and although he surrendered that advantage, the twenty-third seed composed himself and closed out a terrific 6-0 6-2 7-5 win.

Monfils’ reward for his stellar performance is a date with Andy Murray in the quarter-finals, after the Scot made it through to his thirteenth consecutive Grand Slam semi-final with a straight sets win over Fernando Verdasco, surviving a third set tiebreaker to see off the Spaniard.

In the women’s draw, Andrea Petkovic dazzled with her on-court performance and with her efforts in the press conference afterwards, the German coming back from a set down to beat Holland’s Kiki Bertens and then quoting a range of authors and philosophers in the press conference. Next up for Petkovic is a quarter-final showdown with former finalist Sara Errani, who ground out a 7-6(5) 6-2 win over Serbia’s Jelena Jankovic.

Fourth seed Simona Halep, the highest remaining seed in the draw, continued her strong form, coming back from a break down to defeat fifteenth seed Sloane Stephens. Halep will take on former champion Svetlana Kuznetsova for a spot in the semi-finals after the Russian was too strong for Czech Lucie Safarova.

Down a set against former French Open finalist Sam Stosur in the round of 16, things were not looking good for 2012 champion Maria Sharapova. But the Russian gritted her teeth and raised her level, claiming the second set and then running away with the match in the decider. Sharapova will be wary going into this match against Muguruza, the slayer of Serena Williams in the second round.

Muguruza has done a brilliant job to remain focused and keep winning after that momentous upset of Williams, and I’m convinced the Spaniard has a very bright future ahead of her. Muguruza is a clean hitter and refuses to get pushed back into the court, remaining up on or inside the baseline almost all of the time. Sharapova should be too experienced for Muguruza, but anything can happen if the Spaniard exhibits the form that earned her the win over Williams. Sharapova in 3.

I have to say I’ve been mighty impressed with Raonic’s form on the red dirt over the past couple of weeks – first, making the semi-finals in Rome and pushing Djokovic all the way in a tough 3-setter, and then advancing to the final 8 of what should be, on paper, his weakest Grand Slam.

Raonic showed in his fighting win over Gilles Simon and his clinical performance against Marcel Granollers that he is a more mature and consistent performer than in years gone by, and the Canadian has nothing to lose in this one. As Djokovic noted in Rome, it’s extremely hard to get a break of serve when the Canadian is serving well, but the Serbian was in the zone against Tsonga in the round of 16 and should have too much from the baseline when it comes to the crunch. Djokovic in 4.

The old line on Ernests Gulbis was that he can beat anybody, and can just as easily lose to anybody. After the biggest win of his career, an epic 5-set triumph over Roger Federer in the round of 16, and in the midst of a breakout season on the ATP Tour, the big question is whether Gulbis can back up his performance against Federer in this clash.

Berdych leads Gulbis 4-2 in career meetings, but only one of those matches was on clay. And the Latvian will take heart from the fact that one of his wins over Berdych was in a major, at Wimbledon in 2012. Berdych looked incredibly solid against Isner and is the more proven performer at this stage of Grand Slams. However, Gulbis impressed against Federer, particularly off his backhand wing, and won’t be intimidated by Berdych’s pedigree. I think this one will go down to the wire, with Berdych’s greater big match experience eventually getting him over the line. Berdych in 5.

With Milos Raonic making the quarter-finals of the men’s tournament and Eugenie Bouchard blasting her way through to the final 8 of the women’s draw, it’s fair that to say that it’s been a tremendously successful tournament for Canadian tennis. Unfortunately for Bouchard, I think she has peaked just a bit too soon.

Bouchard was spectacular against Kerber in the round of 16, but I fear she will struggle to back up that performance in her match against Suarez Navarro, who is a clay-court specialist and who has been to the quarter-finals at Roland Garros previously. Suarez Navarro has been having a very successful season, winning the title in Portugal last month and I think her majestic single-handed backhand and warrior mentality will earn her the win. Suarez Navarro in 3.