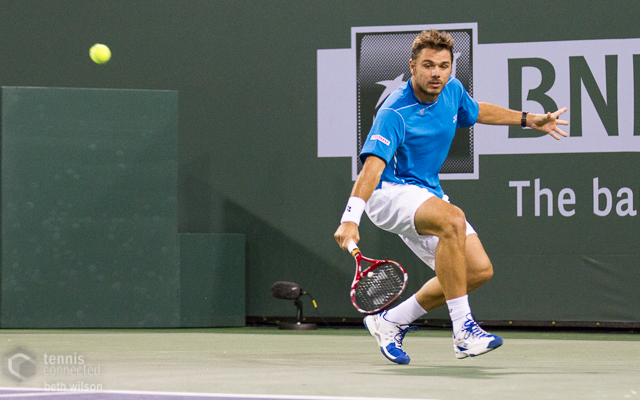 Li Na, and Stanislas Wawrinka. Those are our most recent Slam winners. Let that sink in for a minute. Great players? Absolutely. Front-runners? Far from it. Now, I don’t mean to discredit the bodies of work of these players, specifically Li Na. To say that she had a fighting chance at the title might even have been an understatement, having been runner up in Melbourne twice, and already owning a Grand Slam title. But, when coupling her victory with Wawrinka’s, whose underdog story dwarfs that of David and Goliath, the storyline ventures from improbable to what many all would have thought downright impossible. The stranglehold that the “Big Four” have had on the men’s game has been nothing short of remarkable. With Del Potro being the only man to break through for a Slam title since 2006, even Stan, admittedly, simply didn’t expect to even contend for a Grand Slam. But what now?

All I need is a little spark, a story, or thought even, to allow my musings into the ridiculously hypothetical. Thanks to Stan and Li, and their 451:1 odds of both taking the Aussie title, they have allowed me just that. If those two can take the titles out of the death grip that Serena and the big three (sorry, Roger) have had on them in the first Slam of the year, then what could happen by the last Slam of 2014?

Allow me to jump ahead to August/September, in the heavy, stinking humidity of NYC. Stan is still number three in the world, after validating his performance Down Under, though still seeking another Slam final berth. Nadal, after winning a record ninth French Open title, hasn’t seemed physically right since, though he is insistent that his body is fine. Dimitrov has seen improving results and is a dark-horse favorite to make a deep run in New York. That guy Roger won’t go away, but as the 7th seed, would shock analysts by advancing beyond the quarters. It’s not going out on a limb to say that we knew it would be Novak and Andy’s world soon, only even they don’t appear invincible now.

What does all this theoretical babble mean? Come the conclusion of the 2014 US Open, there will be a changing of the guard. And that doesn’t mean from Roger and Rafa to Novak and Andy; that has been happening over the past two years. What I mean is, the top of the game will finally see the volatility its been lacking for the better part of a decade. Gone will be the days where we can guarantee that one of just a few players will win each and every major title. And I think we, as tennis fans, will welcome, with open arms, the idea that matches before the quarter, or even semi-finals will matter again!

And this doesn’t go for just the men. Serena has been an incredible ambassador for tennis, and American tennis, for a very long time. For the past couple years, if she played her best tennis, the rest of the ladies were fighting for second place. If Serena faltered, Azarenka was there to pick up the scraps, or occasionally Maria, and a Cinderella Bartoli or Stosur, perhaps. The point being, for a long time now, if Serena was playing, it was her tournament to lose. And while having a dominant American was fun for us, it’s gotten bland. Sure, the occasional upset is fun, but tennis needs instability. Serena will win another Slam, maybe even two or three, but she’s no longer untouchable, and I have a feeling the rest of the ladies on tour, by the 2014 US Open, will know that. Enter Eugenie Bouchard. Welcome to the big-time, Sloane Stephens. Simona Halep? Sure. How about now, Radwanska and Woz? Doesn’t that sound like so much more fun?

Let us relish what we have had with the “Big Four,” and the dominance of Serena. Don’t read this as an obituary, and don’t show any of these players this article, the last thing they need is more ammunition. But, let’s look forward to the rest of this season, and all of its hypothetical glory, with hopes of new storylines, and some new energy in the sport we all love. By the US Open, things will be different, I’m telling you.

Though still six months away, the 2014 US Open is going to be one for the ages. It is one, that if you haven’t been paying attention for years, ought to perk up those antennas and inspire you to make plans to be a part of it. Grand Slam Tennis Tours has been taking clients to the biggest tournaments in the world for over 25 years, and the US Open packages are world-class. Stay in the official tournament hotel and ride the elevator with players, enjoy seamless transportation, and the best courtside and luxury suite seats. The US Open is always tennis’ brightest stage, but this year, look for it to be a little bit brighter.

If you are interested in attending the 2014 US Open, don’t hesitate, call Grand Slam Tennis Tours and talk to one of their experienced sales professionals about your world-class luxury tennis vacation today. Who knows, you just might see history being made, right in the front row.